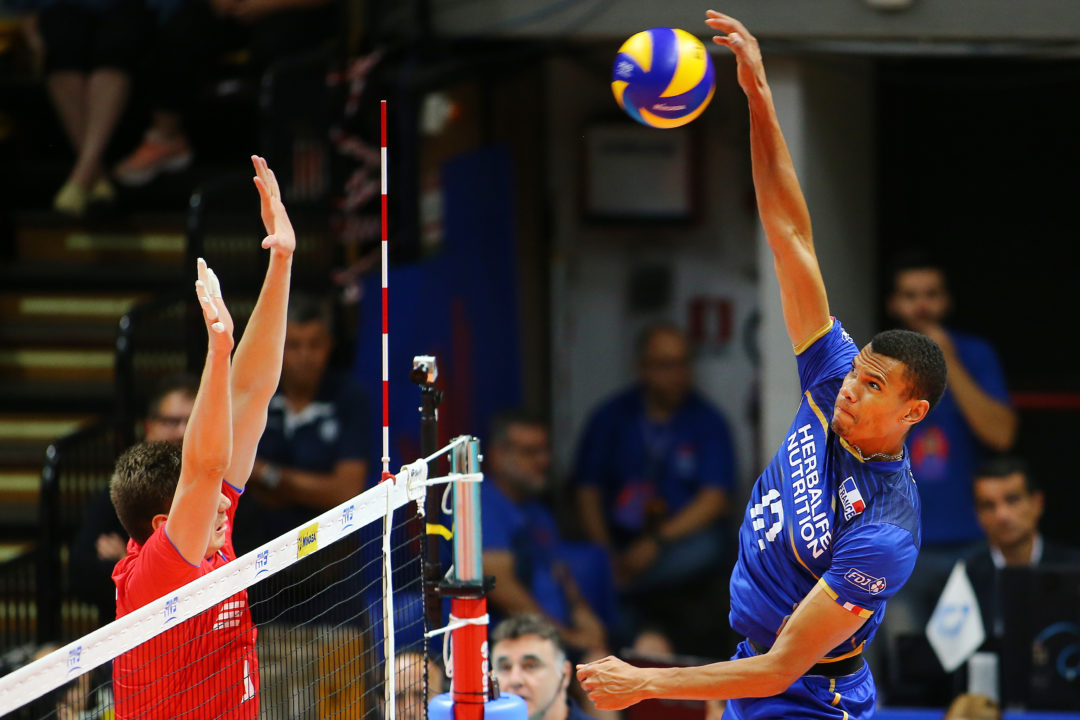 France edged past an error-riddled Russian side for a sweep and the top spot on the VNL standings register heading into the Final Six. Current Photo via FIVB

France edged past an error-riddled Russian side for a sweep and the top spot on the VNL standings register heading into the Final Six.

Although the French were in as the host nation, the team looked to its stars to lead them in a battle for seeding. Earvin Ngapeth, Kevin LeRoux and Stephen Boyer led the way with double-digit scoring efforts, tallying 13, 12 and 12 points respectively. Ngapeth paced the offense with 11 kills and two aces, while Boyer chipped in nine putaways and three blocks. LeRoux did it all, chiming in with four kills to go with a team-best five stuffs and three aces. Jean Patry and Thibault Roussard did not play in the match.

“We played very good, yesterday we made a bad game but we had a good reaction and are pleased to win against this big team,” Ngapeth said. “We knew they were very physical and we spoke before about reception and defense. Ahead of the finals we are very happy to have the Final 6 in France and for our team it will be a very good occasion.”

France tied it up at 18-all in Set 1 as Tillie bounced a pipe attack clocked at 71 mph. It was close until the 20 point mark, when the French took charge, ending Russia’s string five straight-set wins.

The French carried the momentum to an 8-4 advantage in Set 2. Volkov and Shkulyavichus tried to rally Russia, but France answered at each turn. In the end, France issued the Russians their worst defeat in VNL play at 25-13.

After trading points early in Set 3, France built a five-point lead at 12-7. Russia could not handle the serve of LeRoux and watched its hopes of leading the standings slip away. Ngapeth ended the night at 25-18 to lift the French to 13-2 in VNL play.

Both teams are through to the Final Six, which is slated to begin in Lille, France, on July 4. France enters the next phase of the tournament as the top seed in Pool A, while Russia will be second at 11-4 (34 points), atop Pool B.