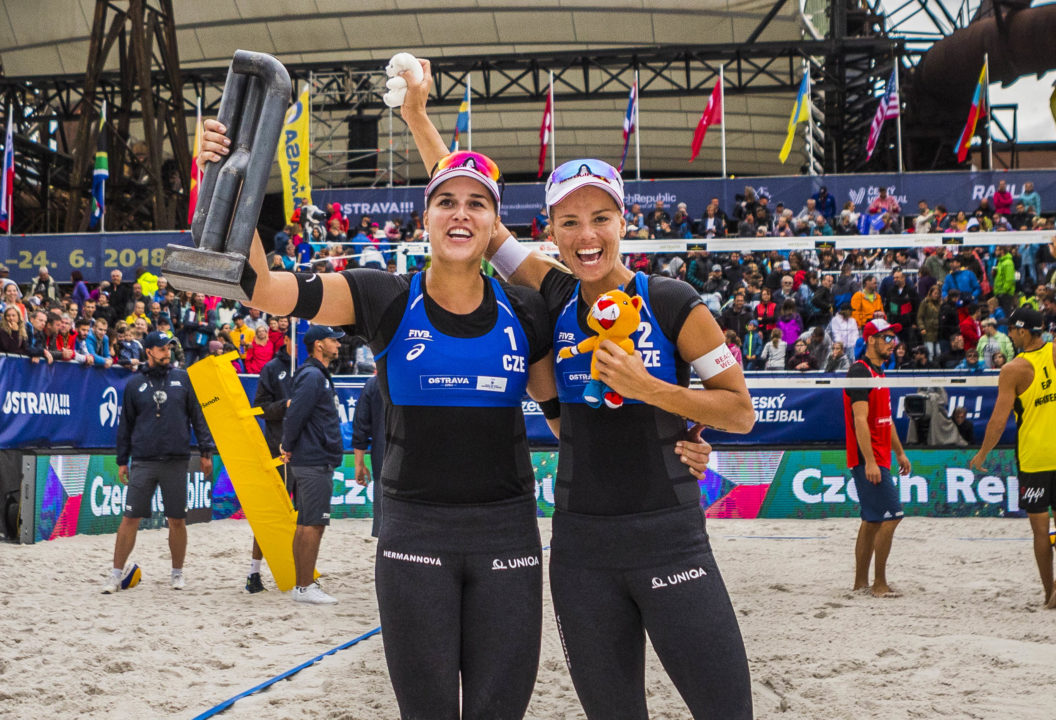 The FIVB gold medal was the duo’s first as a pair since 2015, when it topped the podium at the Antalya Open (Oct. 24, 2015). The pair was runner up at the Porec Five Star in July and finished third at the Four Star in Rio last May.

Hermannova/Slukova fought started Sunday with a straight set win over Germany’s Victoria Bieneck/Isabel Schneider. Once in the final, the pair rallied past Canada’s Heather Bansley/Brandie Wilkerson in tiebreak. The Canadians took the opening set 21-17, but the Czech’s wowed the home crowd with wins of 21-15 and 15-13 to claim the top spot on the podium.

It was the second tiebreak match of the day for Bansley/Wilkerson, who overcome a Set 1 loss to get past Germany’s Karla Borger/Margareta Kozuch in the semifinals (18-21, 22-20, 15-12). The silver medal is the best FIVB finish for the duo and follows a bronze at the Itapema Four Star on May 20.

On the men’s side, Spain’s Pablo Herrera/Adrian Gavira claimed gold with a tiebreak win over Poland’s Piotr Kantor/Bartosz Losiak.

Herrera/Gavira took out Russian qualifiers Konstantin Semenov/Ilya Leshukov in the semifinals 21-19, 28-26, before finishing off a five-match win streak against Kantor/Losiak in the final, 27-25, 15-21, 15-11.

The gold is the first on the FIVB World Tour for the Spaniards since winning the Xiamen Open on April 16, 2016, and follows a bronze medal effort at the Huntington Beach event on May 6.

Kantor/Losiak earned their third FIVB medal of 2018, following silver at the Hague Four Star in January and bronze at the Itapema Four Star on May 20. The pair made the final with a straight set win over homestanding Ondrej Perusic/David Schweiner (21-16, 21-13).

Semenov/Leshukov, which began the tournament in the qualifiers, finished off an impressive showing with the bronze medal, denying the Czechs a home podium finish in a 14-21, 21-18, 26-24 victory. The bronze marks the second medal of the year for the Russians, which won the Mersin Three Star back in May.