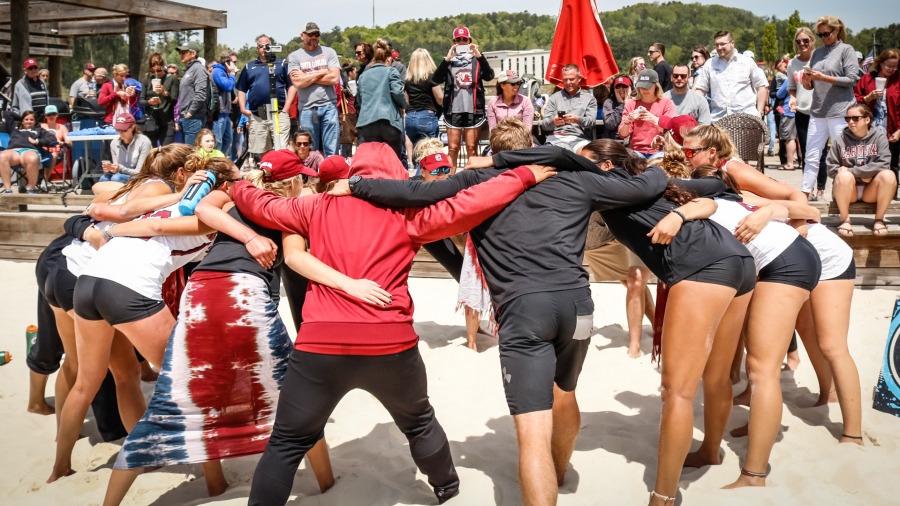 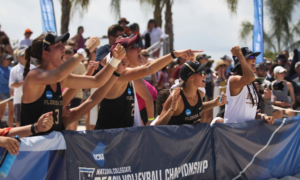 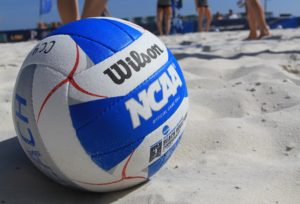 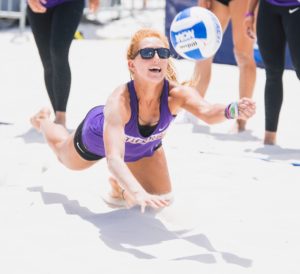 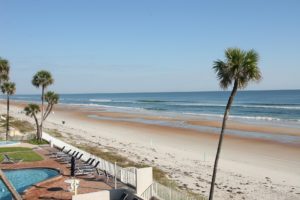 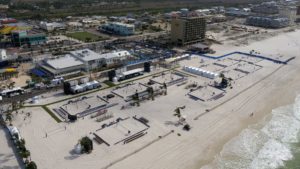 GULF SHORES, ALA. – The South Carolina beach volleyball team begins its quest for a NCAA title on Friday on the beach at Gulf Shores. The Gamecocks (24-7) take on Hawai’i (35-3) at 1 p.m. ET in the opening round of the double-elimination tournament. With a win, Carolina would then face the winner of the LSU and Pepperdine dual at 5 p.m. ET. The losing team in both duals plays an elimination match at 3 p.m.

In its first year carrying the event, ESPN will have comprehensive coverage of every point of the tournament. The overall dual with South Carolina and Hawai’i will air live on ESPNU, with whip-around coverage of all five courts, but fans can also tune in on ESPN3’s web-only coverage of each individual court.

Calling all the action will be play-by-play announcers Courtney Lyle and Sam Gore, analysts Dain Blanton and Holly McPeak, and sideline reporters Holly Rowe and Nell Fortner. All eight duals on Friday (four first round, two elimination, two second round) will air on ESPNU. Day two’s coverage will be on ESPN2, and the championship match at 2 p.m. ET Sunday will be on ESPN.

QUOTABLE: HEAD COACH Moritz Moritz
“The body of work we’ve created this year, all of the hard work these student-athletes put into this season, I think it (the sixth seed) is a place that’s representative of the effort they’ve put into it. Last year we got through the first-year jitters, we didn’t know what to expect, we didn’t have an understanding of how the process worked. The level of expectation based off last year has risen, we knew we wanted to get back to Gulf Shores and we want to continue to excel at Gulf Shores.”

TOURNAMENT HISTORY
Last season, in its first trip to the tournament, the eighth-seeded Gamecocks lost to eventual champion Southern Cal in the first round, and then fell in the elimination bracket to No. 4 seed Florida State. The team returned seven starters that competed in last season’s tournament. This is the third year of beach volleyball holding an NCAA-sanctioned championship.

SCOUTING HAWAI’I
The Rainbow Wahine coming rolling into the tournament as winners of 30-straight duals. A 3-2 win over South Carolina on March 24, the first meeting ever between the two schools, was part of this win streak. Leading the way is the top pairing of Emily Maglio and Ka’iwi Schucht, who stand at 34-4 overall and 25-1 at number one this season. Hawai’i has two other pairs with 30 or more wins together, with Morgan Martin and Lea Monkhouse (19-0 at No. 2, 15-3 at No. 3) and Ari Homayun and Amy Ozee (32-6 at No. 4, including 24-straight wins). Last season, the Wahine reached the semifinals of the NCAA tournament.

SCOUTING PEPPERDINE
Pepperdine lost to Southern Cal in the finals of 2017’s tournament, and enter the weekend as the number two seed. The Waves face seven-seed LSU in the opening round, a team they’ve defeated three times already this season. Pepperdine has lost just once since the end of February, which includes a 4-1 win over South Carolina on March 17. The team is strongest on courts two and four, with season records of 25-2 at both positions. Skylar Caputo and Alexis Fillippone lead the team with 25 wins as a pair, Corinne Quiggle and Deahna Kraft are close behind with 22 wins (8-4 at No. 1, 14-1 at No. 2).

SCOUTING LSU
The Tigers enter the tournament as the seventh seed, earning an at-large bid after being edged out for the number three east region seed by FIU. LSU is 26-12 overall and made the final of the CCSA tournament last weekend. The team has a versatile lineup, rolling out six different pairs at number two, eight at number three, nine at number four and eight at number five. The one mainstay has been the top pairing of Claire Coppola and Kristen Nuss, the CCSA’s Pair of the Year. This is also LSU’s second trip to nationals; last season as the number seven seed, the Tigers went 1-2 at the tournament with a win over Long Beach State but losses to UCLA and Hawai’i.

GAMECOCKS COLLECT POSTSEASON HONORS
Three members of the program were honored by the CCSA conference office heading into the postseason. On April 18, junior Shannon Williams and sophomore Carly Schnieder were named to the CCSA’s All-Academic team. Williams carries a 3.79 GPA as a Risk Management and Insurance major, and Schnieder is a Pharmaceutical Studies major with a 3.65 GPA. This marks back-to-back seasons with multiple Gamecocks earning academic honors, as Julia Mannisto and Katie Zimmerman made the conference’s list last spring.

On April 19, it was announced that head coach Moritz Moritz is the conference’s Coach of the Year. The Gamecocks went 9-3 in the CCSA this season, earning them the number two seed in the conference tournament. Of those nine conference wins, all came over ranked opponents. South Carolina’s 24-7 overall record marks the third-straight year with 20 or more wins, with 12 wins coming over against nationally ranked opponents. Moritz has served as head coach for each of the program’s five seasons to date, and has a career record of 86-53 (.619).

SCHNIEDER RECOGNIZED BY NCSA
Sophomore Carly Schnieder earned beach volleyball’s inaugural All-American Strength and Conditioning Athlete of the Year award on April 5. The National Strength and Conditioning Association recognizes student-athletes at the Division I, II and III levels as well as high school across 22 sports. Beach volleyball was added for 2018, and Schnieder is the lone beach volleyball representative. The award recognizes athletic accomplishments that reflect the time dedicated to strength training and conditioning, and also factors in academic strength and community service. Nominees are put up for consideration by their team’s strength and conditioning coaches.

GAMECOCKS IN THE NATIONAL RANKS
The team earned its first-ever ranking by the AVCA on March 6 of last season. The Gamecocks are currently ranked 9th in the latest national poll. Eleven Gamecock opponents are currently ranked in the top 20, including numbers one, two and three, six of the top 10, and four other opponents receiving votes.

CARDIAC KIDS
South Carolina has shown a flair for the dramatics this season, as it holds a 9-2 overall record in duals that have come down to a 3-2 score. On top of that, 40 of the team’s 155 individual matches across 31 duals have gone to three sets. The Gamecocks have come out on top in 27 of those 40. Highlighting the team’s success are Ali Denney and Shannon Williams, who currently have a 9-2 record this season in three-set matches.

BATTLE-TESTED SOPHOMORE CLASS KEY to 2018 SUCCESS
The 2017 freshman class might very well go down as one of the best in school history, as four first-year student-athletes made the starting lineup and all four – Ali Denney, Franky Harrison, Carly Schnieder and Katie Smith won over 20 dual matches as individuals. Now as sophomores, Denney, Smith and Schnieder are in the lineup as part of the first, second and third pairs, respectively. Schnieder is tied for the team lead with Smith at 23 wins, and Denney racking up 14 wins at the number one pairing this season.

GRAD CHANCE U
South Carolina welcomed its first grad transfer in 2015, when Jade Hayes came to Columbia from UCF. Last season, former indoor All-Americans Katie Zimmerman (Wichita State) and Adrianna Culbert (Colorado State) were vital pieces to the team’s NCAA Tournament run. The three left South Carolina with a combined record of 90-45 in dual matches while competing on the team’s top pairs. This season, a new group of indoor standouts had a chance to leave their mark on the program. Leah Perri (Clemson) trained with the team in the fall after a career with the Tigers saw her make All-ACC teams twice. Cadie Bates (Duke) is coming off a career year with the Blue Devils this fall, and played in 83 career matches indoors. Lydia Dimke (Creighton) was a 2016 AVCA All-American for the Blue Jays, and led the team to the Elite Eight of the 2016 NCAA tournament and the No. 9 overall seed in the tournament this past season. Despite the setback of losing Dimke for all but five of the team’s regular-season duals, South Carolina’s grad transfers are currently 46-17 (Bates 20-7, Dimke, 3-2, Perri 23-8).

GAMECOCKS TACKLE A TOUGH SCHEDULE in 2018
South Carolina has stepped its strength of schedule so far this spring. The team faced six of the seven other teams who made the 2018 national tournament field, and 18 of its 31 matches to date have come against top-20-ranked teams. The Gamecocks are 12-6 in those matchups, highlighted by their first wins ever against Georgia State, Stetson and LSU. For comparison, the team was a combined 5-25 against nationally ranked opponents in its first four seasons.