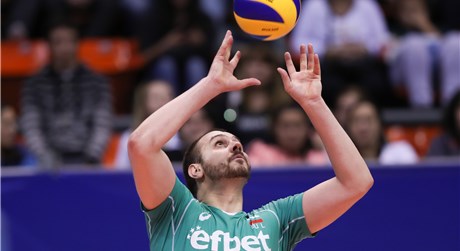 While it was thought to just be a sprain, it is now apparent that Georgi Bratoev has a fractured ankle. His status for the World Championships is in doubt.  Current Photo via FIVB

When Bulgaria played Australia back on June 2, Georgi Bratoev landed on Paul Sanderson’s foot when the two players jumped near the net and engaged in a joust. Losing one’s starting setter is not a favorable situation for any team to find themselves in, but I do not think Plamen Konstantinov, coach of Bulgaria, thought the incident would turn into such an ordeal.

The reports coming out of Bulgaria first feared it was a broken ankle. The team broke the news the very next day that the injury was not serious. There were no reported breaks or ligament damage. He was to undergo an MRI, but the initial estimates put his absence at 6 weeks. Bratoev was set to miss the rest of the Volleyball Nations League, but would be back on the floor for the World Championships in September.

Bratoev confirmed his injury was not serious to the Bulgarian media just a few days later. “There is no break,” he stated.  “There is a sprain, which I think should go away within a month and everything will be fine.”

The severity of his injury seemed even more diminished when Bratoev was on the 14-man roster for Bulgaria for week 4. He did not play in the matches against Canada, France, or Brazil. At the end of last weekend they announced that he would not be travelling to Iran in order to help his sprained ankle hear. While he was not yet fit to play, his appearance on the sideline was encouraging.

That encouragement may be dimmed after the latest report on his injury status. An announcement published just after midnight in Bulgaria announced that there was actually a fracture Bratoev’s ankle. More examinations will take place on Friday in which a final decision about the length of the recovery will be made, but it is feared he will not be healthy in time for the World Championships.

Bulgaria is hosting the World Championships with Italy and open up the tournament against Finland on September 9th in Varna. In addition to Finland, they will play Cuba, Puerto Rico, Iran, and Poland, the defending World Champions. While they are in great shape to qualify for the 2nd round (the top 4 teams qualify), it is difficult to think they will win the pool without Bratoev or their opposite, Tsvetan Sokolov. Georgi Seganov will more than likely handle the setting duties for Bulgaria if Bratoev is not cleared to play.