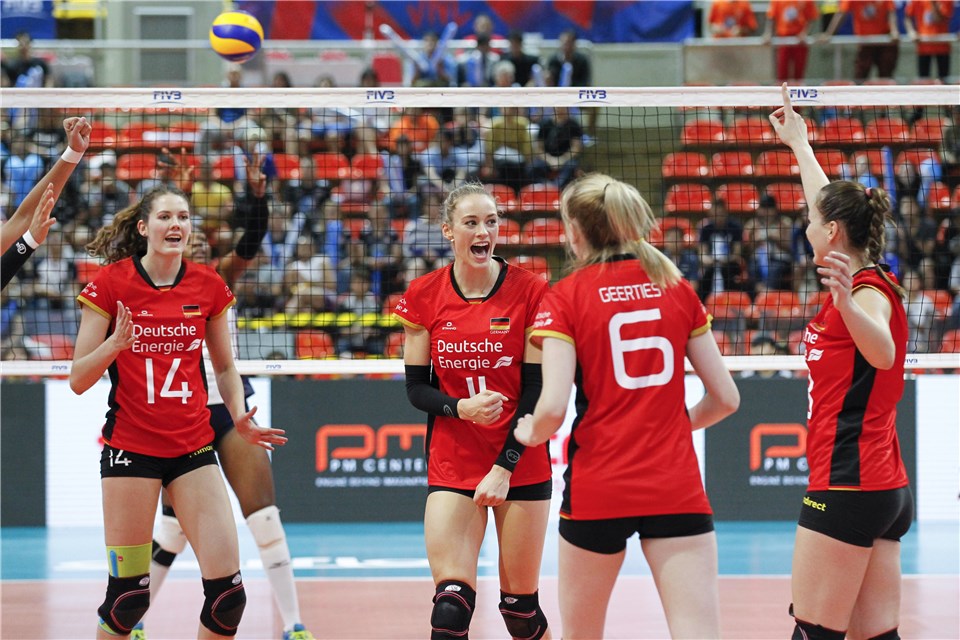 Louisa Lippman came through for Germany in a big way, dropping 29 points to pace the team in a four-set win over the Dominican Republic on Thursday.  Current Photo via FIVB

Louisa Lippman came through for Germany in a big way, dropping 29 points to pace the team in a four-set win over the Dominican Republic on Thursday.

Lippman posted 25 kills, two blocks and two aces, to lift her tournament total to 177 points, second among all players behind Poland’s Malwina Smarzek. Jennifer Geerties and Lena Stigrot chipped in nine points apiece and Maren Fromm added seven to round out the German offense. Stigrot notched seven kills in just over a set of play after coming in as a substitute in Set 3. Fromm downed seven kills in the first three sets of action, while Geerties turned in five kills, a team-best three aces and a block.

After trailing by as many as five in Set 1, the Germans tied it up at 20-all and earned their first lead on a Lippmann ace. A net touch on a block by Brayelin Martinez gave Germany a set-point try and an ace by Marie Scholzel clinched the comeback at 25-22.

Germany led Set 2 from start to finish, wrapping up the 25-15 win on a block by Lippman and Lisa Grunding.

The Dominican Republic rallied after intermission, going up by six twice in the stanza and hanging on for the 25-21 victory, which ended on a Martinez putaway.

The Germans regained control in Set 4, rolling to a 25-12 win and clinching the match on a Geerties kill.

Germany Team Captain Maren Fromm: “I am very happy about this victory, this was our goal today. I think the key point today was our serves, putting a lot of pressure on the Dominican team; and our blocking as well. Yesterday’s game gave us confidence even though it was hard today because we played a long time yesterday, it was late. But it was really important to us to focus on what we have to do and prepare well for this match.”

Germany Head Coach Felix Koslowski: “Of course, I’m very happy about this win today. Dominican Republic are  really a great team and they have showed in this Volleyball Nations League that they have great potential. They have a very good coach in Marcos and they are  improving all the time. With all these points, all these victories count even more for us. Yesterday, we said that we got a taste of winning and today we wanted to keep that and wanted to stay hungry for the match, hungry to win. My team did exactly that, bringing all the emotions on the court. They played just really well.”

Dominican Republic Team Captain Niverka Marte: “First, congratulations to the German team! Of course, I’m not happy with today’s match. I think we didn’t follow, tactically, what our coaches said before the match. We made so many mistakes and Germany played just really well, really fast, and with a lot of emotion.”