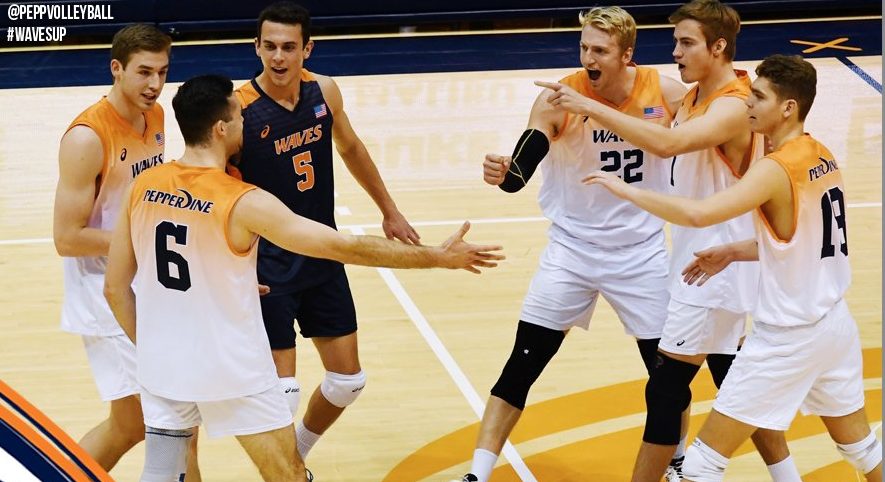 Senior outside Alex Harthaller was a one-man wrecking crew, throwing down 17 kills, while hitting at a mind-boggling .708 clip (17-0-24), pacing No. 11 Pepperdine to a surprise sweep of No. 2 UCLA on Friday.  Current Photo via Pepperdine Athletics

Senior outside Alex Harthaller was a one-man wrecking crew, throwing down 17 kills, while hitting at a mind-boggling .708 clip (17-0-24), pacing No. 11 Pepperdine to a surprise sweep of No. 2 UCLA on Friday. Redshirt junior outside David Wieczorek followed with 13 kills and four aces in the win, the fifth straight for the Waves.

As a team, Pepperdine hit at a highly efficient .455 clip, with all but one hitter registering a .440 or higher effort in the match. The Waves outdid the Bruins 43-31 in kills and 10-3 in blocks. UCLA won the serving battle 6-5.

UCLA led by three in the opening set, but couldn’t hold on for the win. Seven Wave errors, including five service errors, helped the Bruins to the 13-10 advantage. Pepperdine tied it up at 14 and 15 with two kills each by Harthaller and Wieczorek. Later, down 17-15, the Waves put together 7-2 run to charge ahead by three at 22-19. Three blocks, including two by Harthaller, aided the rally. Two more UCLA errors and a stuff by Michael Wexter and Wieczorek capped the comeback win at 25-21.

The Waves appeared to have Set 2 under control, racing out to a 9-4 lead in Set 2 as four different players notched kills and Chamberlain added an ace. It was all tied up at 10 as Arnitz downed two kills and Sam Kobrine served up two aces. It was the first of nine ties, last at 18, as the teams traded blows. Two Arnitz aces put UCLA on top 21-18 forcing a Pepperdine timeout. The break worked as the Waves scored four straight, including a kill and a block by Harthaller, to go up 22-21. The teams tied at 22 and 23, before a Wexter putaway and Arnitz hitting error wrapped up a 25-23 Pepperdine win.

Pepperdine worked its way to a 13-10 lead in Set 3 as UCLA missed four serves and Wieczorek downed three kills. Kills by Martin and Arnitz cut the margin to one at 13-12, but the Bruins could not break through. The Waves went up by four at 19-15 and held UCLA at bay the rest of the way, never allowing the lead to go below three. Wieczorek registered two kills and a block to give Pepperdine its first match-point try at 24-19. A Gyimah putaway stopped the Waves momentarily, before Harthaller issued the final blow.

#Hunted .. The #10 Waves get another #UPSET tonight as they #Sweep #2 UCLA at home! #Check these highlights out! pic.twitter.com/nREy4y3TL2

The No. 2-ranked UCLA men’s volleyball team dropped a straight set decision at No. 10 Pepperdine in a Mountain Pacific Sports Federation (MPSF) match on Friday night in Malibu. Scores of the match were 21-25, 23-25, 20-25. The Waves outhit and became just the second team to out block the Bruins this season. UCLA falls to 14-4 on the season and 3-1 in MPSF play. Pepperdine captured its fifth straight win and improved to 9-3 and 3-1 in the league.

In set one, UCLA moved into a 10-8 lead after a kill by Dylan Missry. The Bruins upped the margin to 13-10 on a block by JT Hatch and Daenan Gyimah. Pepperdine answered with the next three points to even the score. After UCLA went up 17-16, the Waves ran off four straight to establish a 17-20 advantage. UCLA cut it to 19-20 after a Missry / Gyimah block. Pepperdine came right back to register the next two points and went on to take the set 21-25. UCLA hit -.036 with eight errors.

Pepperdine stormed out to a 1-6 lead to begin set two. UCLA came back behind the strong serve of freshman Sam Kobrine who ignited a 4-0 Bruin run to bring the Bruins even at 10-all. A Jake Arnitz kill put UCLA ahead 18-17. Back-to-back aces from Arnitz pushed UCLA in front 21-18. However, the Waves rebounded with four straight points to go up 21-22. Another Arnitz kill leveled the score at 23-all, but the Waves tallied the next two points on a kill and a Bruin error for a 23-25 win. Pepperdine hit .684 for the set. Arnitz finished with six kills.

The Waves spurted to an early 4-6 lead in set three. UCLA evened the score at 7-all after a Hatch kill only to see Pepperdine score five of the next seven points to regain the lead with a 9-12 advantage. UCLA closed to 12-13 after an Arnitz kill, but could not get the even. The Waves then surged into a 16-20 lead. Kills by Oliver Martin and Arnitz sliced the gap to three on separate occasions. Pepperdine closed out the Bruins 20-25. Arnitz totaled four kills in the set.

Arnitz came off the bench to top UCLA with 11 kills and two aces. Hatch finished with eight kills while hitting .500. Pepperdine outhit the Bruins .455 to .203 for the match, with just three hitting errors in the last two sets. The Waves out blocked UCLA by a margin of 10.0 to 3.0 for the match. UCLA tallied a season-low 31 kills while dropping their third straight contest. The Bruins will continue their MPSF road swing next week with trips to Stanford (Mar. 1) and BYU (Mar. 3).