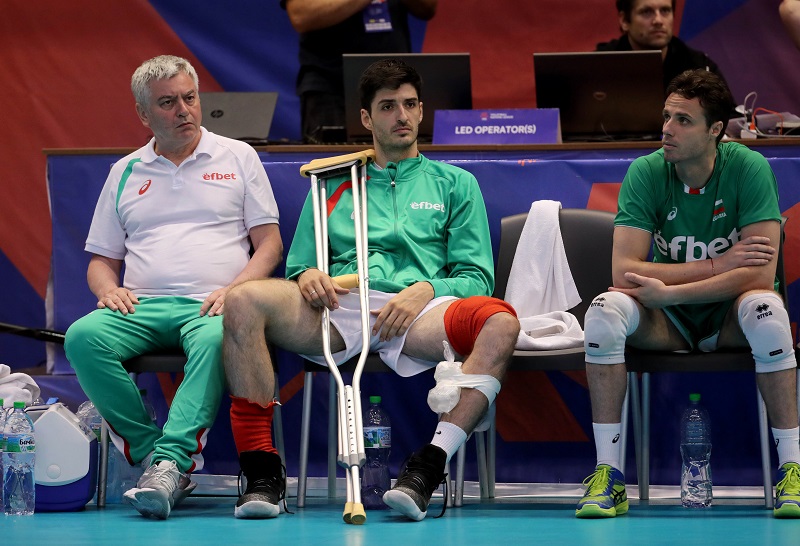 Todor Skrimov is the latest Bulgarian player to fall victim to injury. He left after the first point of Bulgaria's 3-0 defeat to France on June 15, 2018. Current Photo via Bulgarian Volleyball Federation

Bulgaria did not give the home fans much to cheer about on the opening day of Pool 16 in the Volleyball Nations League. They lost a 0-3 (21-25, 20-25, 23-25) decision to a French squad that did not use Kevin LeRoux, Earvin N’Gapeth, or Stephen Boyer (he played a very small role as a substitute in the first set). To make matters worse, one of the starting outside hitters for Bulgaria went down with an injury during the first point of the match. Tsvetan Sokolov is missing all of the competitions for Bulgaria this summer after having surgery on his patellar tendon back on June 4, 2018. Georgi Bratoev sprained an ankle against Canada a few weeks ago. Now Bulgaria needs to add Todor Skrimov to that list.

Skrimov, who signed with Callipo Sport in Italy on June 12, 2018, went down with a calf injury on the first point of the match. He spent the rest of the match on the bench with crutches and ice on his left calf. The impact of his loss was felt immediately by his team. Bulgarian captain, Victor Yosifov stated, “Maybe we were a little bit stunned at the beginning because of Skrimov’s injury, and there was tension and we were a bit overwhelmed.”

While there has not been an official statement made by the Bulgarian Volleyball Federation regarding the extent of his injury, Plamen Konstantinov, the Bulgarian head coach, did give some insight. After calling the performance his team’s worst of the tournament, he explained, “I hope he is not that serious, but the indication is to tear the calf.” Hopefully an announcement is made in the coming days regarding the severity of his injury and the length of his absence.

Skrimov was back in the lineup this weekend after being left off the roster for last week’s matches. Up until his injury he had scored 56 points from 43 kills and 13 aces.  His 0.34 aces per set average is only behind Wallace De Souza’s 0.35 on the list of the top servers in the competition. Skrimov has also hit with a success rate of 45.74%.

The loss for Bulgaria has kept them in 12th place in the standings. With Iran taking a match from Poland, they will cause a bit more separation from Bulgaria. Going into the day they had the same record, same amount of points, but Iran was up on sets ratio. Iran’s win moves them further ahead on record and points, and it means Bulgaria is getting closer to elimination.