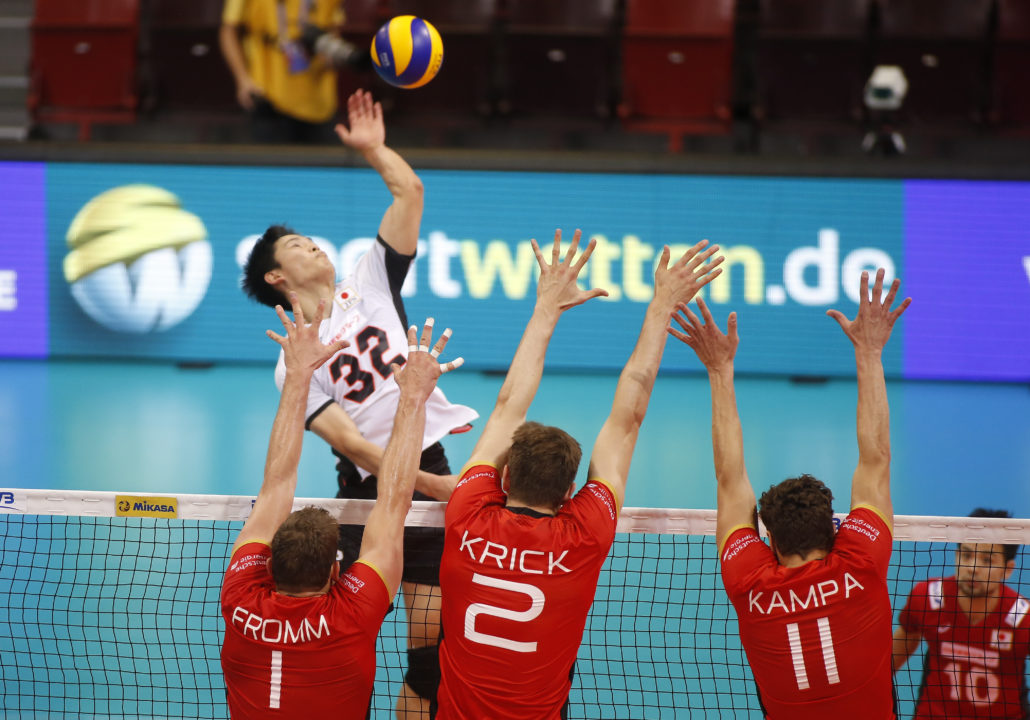 Thirty-four errors plagued Germany in its five-set loss to Japan on Friday, nullifying the team's advantages in kills and blocks. Argentina boasted a slight edge in kills and aces, but could not get out of its own way in the match, committing 24 errors in a 3-0 loss to Russia. Current Photo via FIVB

Thirty-four errors plagued Germany in its five-set loss to Japan on Friday, nullifying the team’s advantages in kills and blocks.

The home side boasted a 67-56 lead in kills and 10-4 advantage in blocks, but were undone after giving away 34 points on errors and giving up 11 aces.

Eighteen-year old Yuji Nishida put up a match-high 24 points with 21 kills and three aces. Masahiro Yanagida (17), Akihiro Yamauchi (10), Tatsuya Fukuzawa (9) and Haku Ri (9) combined to round out the Japanese scoring. Yanagida downed 13 kills and served up a team-best four aces. Ri led the team at the net with two blocks and added two aces to go with five kills. Yamauchi and Fukuzawa notched nine and seven kills apiece.

Christian Fromm‘s 20 points on 19 kills and a block were not enough to lift Germany to victory. Tobias Krick chipped in 14 points on 10 kills and a team-best four blocks, while four other players added eight or more points. David Sossenheimer started the final two sets after playing as a sub in sets 1 and 3, winding up with 11 points on nine kills and the team’s lone two aces. Moritz Reichert (9), Marcus Bohme (9) and Simon Hirsch (8) followed. Hirsch started the night on the bench and put together an eight-point effort over the final three sets. Reichert and Bohme chimed in with nine and eight kills apiece.

Japan jumped out to an 8-4 lead in Set 1 and pushed its advantage to eight at 17-9. Germany rallied and sliced the margin in half at 21-17, but could not get out of its own way, committing five service errors down the stretch, including set point.

The teams played to an 11-all tie in Set 2 as Fromm found his stride and Jakob Gunthor and Hirsch chimed in to guide Germany to a 25-21 win to knot up the match.

The Germans continued to struggle from the service line in Set 3, while Japan shined, utilizing two aces by Yanagida to clinch a 25-15 win.

The tides turned again in Set 4 with Germany taking the early lead and grabbed a slight edge late with Sossenheimer at the end line. Fromm dished a reserve set to Sossenheimer to send the match to tiebreak.

Krick put Germany up early in the decisive fifth set, but Japan battled back with a 4-1 run to vault ahead 11-9. A stuff by Fukuzawa and offensive prowess from Nishida lifted the Japanese to the five-set victory.

Argentina boasted a slight edge in kills and aces, but could not get out of its own way in the match, committing 24 errors in a 3-0 loss.

The Argentines outdid Russia 45-43 in kills and 2-0 in aces, but that four-point edge was quickly erased by 24 errors. Russia committed just 12 errors in the match and also boasted an 8-5 lead in blocks.

Russia started its third-straight victory with an 8-4 advantage and carried that four-point edge to 11-7. Argentina rallied to within one, but Muserskiy came through down the stretch as the Russians claimed a 25-20 win.

Volkov helped Russia to a 14-9 lead in Set 2. In one of the plays of the game, Kliuka slid across the floor and set from the seated position, getting the ball to Volkov to keep Russia on top at 18-14.

To top that and close out a 25-20 victory, Volkov chicken-winged the ball up and Kliuka eventually put down an overpass.

Russia led by six at 16-10 midway through Set 3. Soon after, the Argentines seemed to be out of time, down 24-21, but errors by Volkov and Muserskiy aided the team and knotted it up at 24. With another shot at 25-24, Volkov prevented any further drama with a sure putaway.