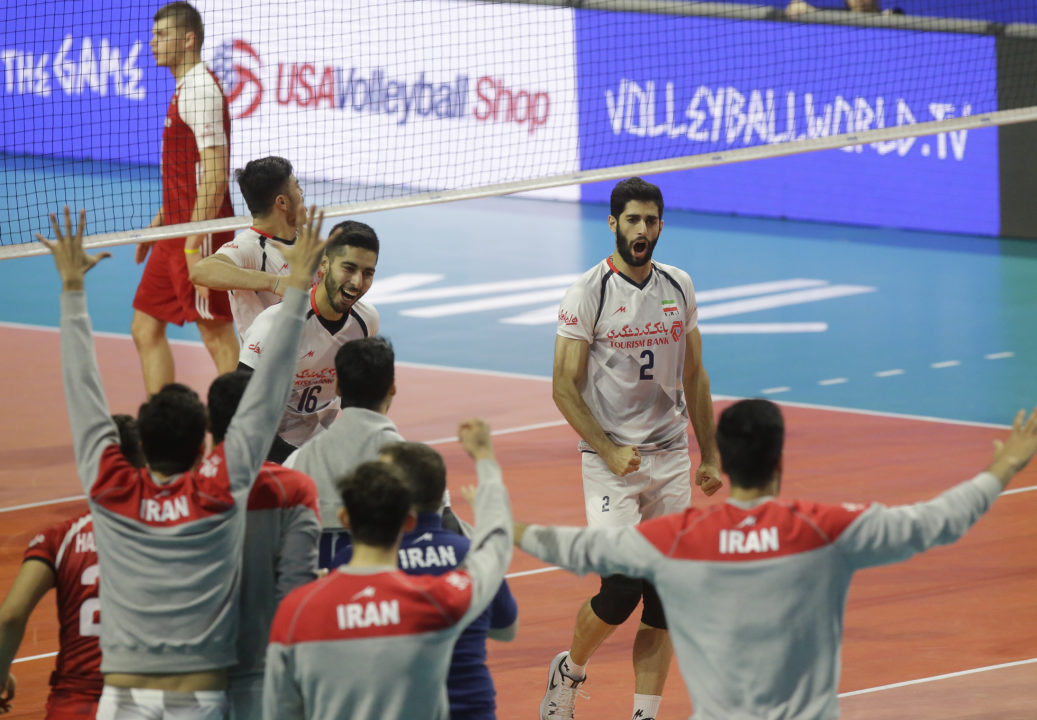 In a match that was much closer than the statistics showed, Iran pulled a big upset over World No. 3 Poland, issuing the team its second loss of VNL play.  Current Photo via FIVB

In a match that was much closer than the statistics showed, Iran pulled a big upset over World No. 3 Poland, issuing the team its second loss of VNL play.

Damian Schulz paced Poland with 12 points on nine kills and a team-high three aces, while Artur Szalpuk followed with 11 points, all on putaways. Bartosz Kwolek (9), Jakub Kochanowski (7) and Bartosz Kurek (6) were not far behind. Kwolek notched eight kills and a block, while Kochanowski chipped in four kills, two aces and a block. Kurek put up a team-high two blocks to go with four putaways.

“We came here with some defeats and all the sets were tough,” setter Mir Marouflakrani said. “Our young players were so good . We are here to play some of the best teams in the world. Both will be hard but will fight hard just like we did here.”

Poland boasted a slight edge in the opening set at 17-16 with help from Kwolek, but Iran rallied to knot the score at 22. That is when the fireworks started between the two teams and Polish coach Vital Heynen began railing against the officials for a call the review system proved correct. Yali followed the point with a hitting error and Iran finished off the 26-24 win in extra points. Iran bested Poland 17-13 in kills and 5-2 in aces in the opening stanza.

Set 2 was just as close, with Poland rallying to tie it up at 19. The teams were level again at 24-all when tempers flared yet again. The officials awarded the Poles a point on a Marouflakrar mishit, but Iran challenged and a video review showed the attempt grazed Kochanowski and gave the Iranians a set-point try.

The Poland bench was issued a yellow card for continuing to protest at the beginning of Set 3, but the team was not deterred from its mission to extend the match. The sides played to close 23-22 score late in the stanza. With a huge upset just two points away, Iran held strong.