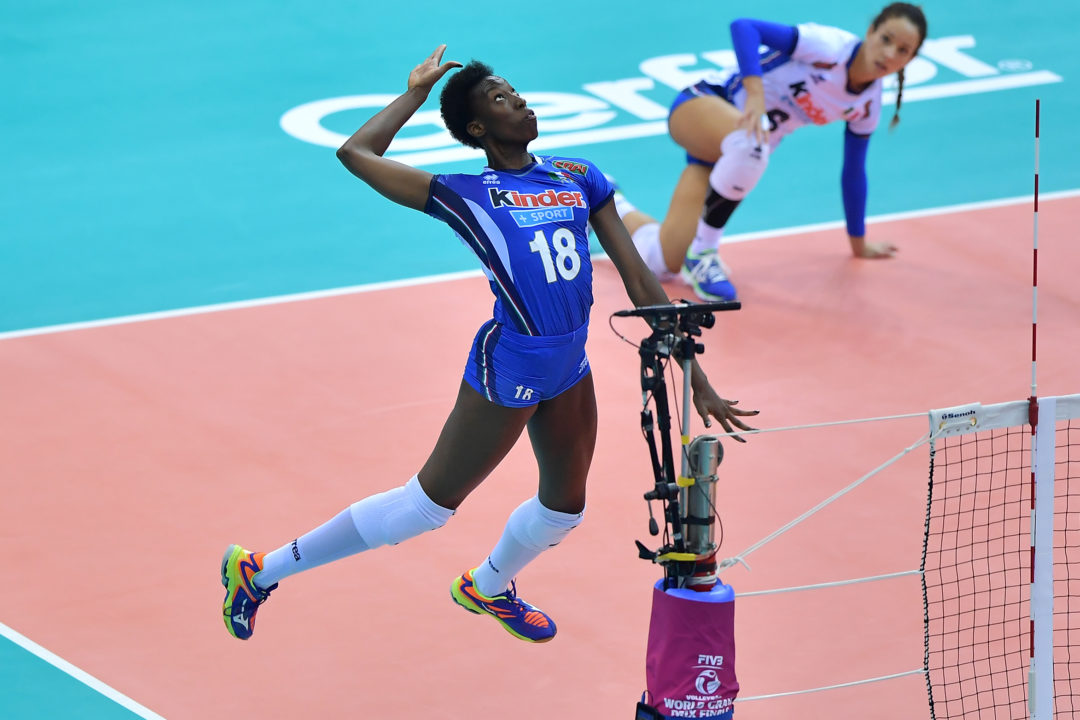 Egonu will take Serena Ortolani's spot on the roster after Ortolani led Italy in scoring through 2 weeks. Current

The 2017 FIVB World Grand Prix’s 2nd-leading scorer Paola Egonu will make her debut for Italy this week at the 2018 FIVB Women’s Volleyball Nations League. Playing in Pool 11 in Hong Kong with China, Japan, and Argentina, Egonu is making her first appearance of the tournament on Italy’s 14-player roster.

Italy went 0-3 in week 1 of the tournament in Lincoln, Nebraska, with a very thin roster, but have slowly been rebuilding to (almost) their full national team that took them to Grand Prix silver last year. Egonu will be the biggest name to return to the lineup – she’s still 19 until December, but last year at just 18 years old led all players with 29 points in the championship match loss to Brazil.

In week 1 this year, Italy had just 3 out of 14 players from that Grand Prix final. Last week, with the addition of Lucia Bosetti, that number rose to 4. This week, the team will have 8 of their 14 back, including 5 of the 7 starters.

Also rejoining the roster for week 3 is veteran libero Monica de Gennaro, middle blocker Cristina Chirichella, and middle blocker Anna Danesi. Both players started matches in last year’s Final 6, with Chirichella getting the nod in the final where she scored 14 points.

The only starters missing are Caterina Bosetti and Raphaela Folie, the latter of whom suffered an injury in the Serie A Italian league finals and is not expected to play in the Nations League.

Dropped from the roster for week 3 are opposite Serena Ortolani, middle blockers Rossella Olivotto and Beatrice Berti, and libero Ilaria Spirito. Ortolani led Italy in scoring through 2 weeks of play with 74 points.

Among the players she’ll face in her return: China’s best player, outside hitter Zhu Ting.