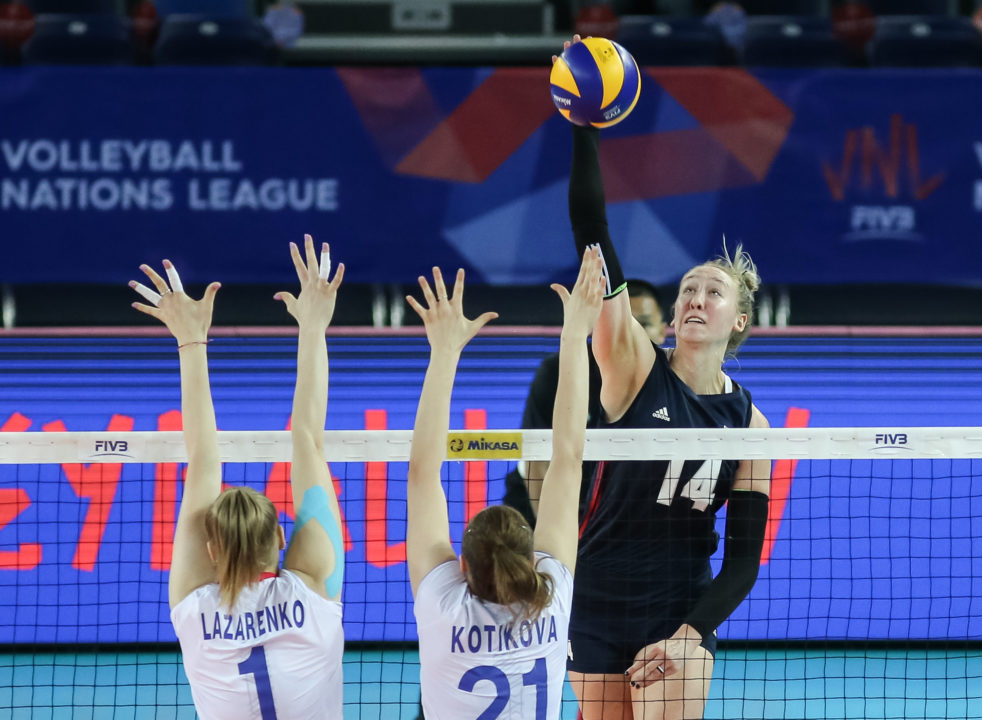 While many teams with spots in the Final 6 secured, or almost secured, have left their star players  home to rest (Serbia, we’re looking at you), the #1-ranked Americans have maintained the same roster for the 5th and final week of the preliminary round of the 2018 FIVB Women’s Volleyball Nations League.

This is a roster that hasn’t lost a match in almost a month, having won 10-straight matches and 30 of their last 31 sets at the tournament.

While they have the same roster for the 4th-straight week, USA Volleyball points out that head coach Karch Kiraly has used 9 different starting lineups in the team’s first 12 matches, with setter Carli Lloyd being the only constant.

The team now heads to Santa Fe, Argentina with a top-of-the-table, equivalent to the #2 seed behind Final 6 hosts China, well within reach. the Americans’ 11-1 record through 4 weeks puts them 1 game up on Brazil in the wins column, and 6 points clear. That means that any combination of U.S. wins and Brazilian losses that adds up to 2 clinches the #1 spot for the Americans.

2 wins shouldn’t be a tough task for the Americans in a pool with winless Argentina, a Serbian “B” team, and an eliminated South Korean team with pride, but little else, to play for.

The team has been led in scoring by Michelle Bartsch-Hackley in 7 of their 12 matches so far, and she currently leads the team with 144 points scored (an average of 12/match). Jordan Larson ranks 2nd with 119 points and Kim Hill 3rd with 108 points. Team USA’s starting setter, Carli Lloyd, leads all players in the tournament with 16.55 running-sets-per-set, meaning that Americans are getting more opportunities against 1 or 0 blockers than the rest of the tournament.

As we laid out yesterday, floor defense for the American women has also improved since moving outside hitter Kelsey Robinson to libero: her first time playing libero for the USA internationally.

The Americans rank in the middle-of-the-pack in blocks (7th out of 16 teams), but are getting great production from Lauren Gibbemeyer – who has amassed 22 stuff blocks in just 21 sets played a rate of 1.05/set. Presuming the Americans settle into their top roster in the Final 6 (although, results don’t indicate that’s a requirement for them), she should become a force in the final stages of the tournament.