Major Serbian Players, Including Coach, Will Skip Week 5 of #VNL 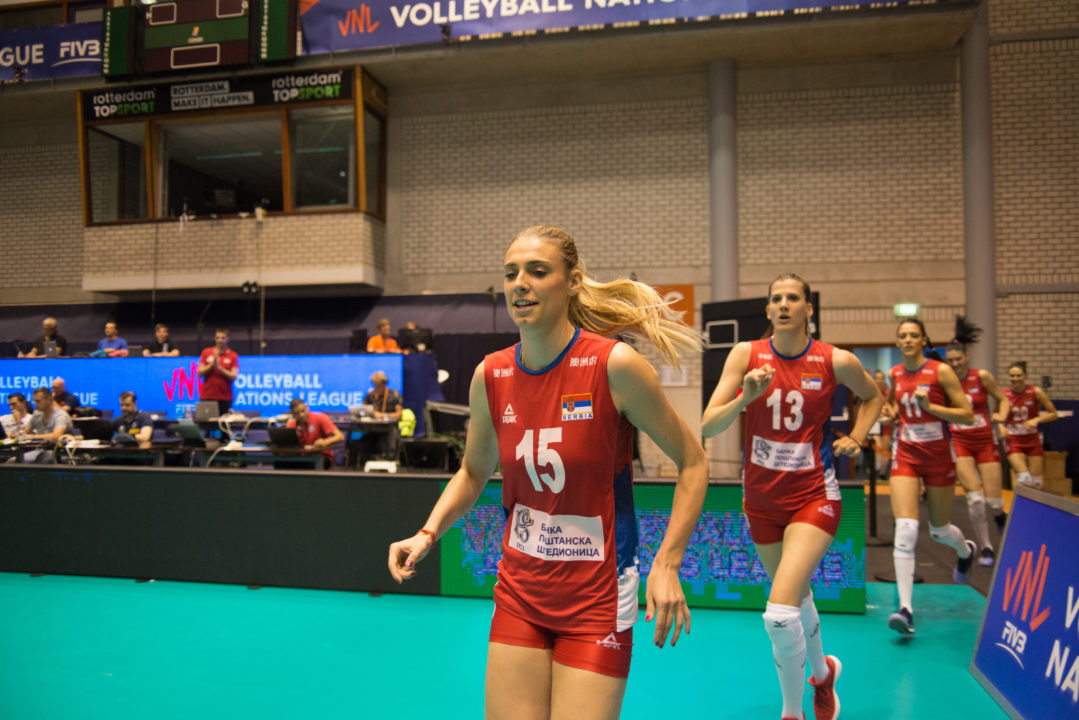 With their spot in the Final 6 almost locked up, and one of their superstar players Brankica Mihajlovic sidenlined with injury, the Serbian women’s national team has all-but-packed-up and headed home from the 2018 FIVB Women’s Volleyball Nations League.

About half of Serbia’s team, and coaching staff, flew from Rotterdam, Netherlands to Santa Fe, Argentina this weekend in preparation for their final pool of play beginning on Tuesday. That grueling trip of more than 7000 miles, 5 time zones, and 2 hemispheres was enough to convince the Serbians to take a gamble.

They’ve sent most of their stars, and their coach Zoran Terzic, home to Belgrade to rest for the Final 6. The names missing from the week 5 roster, besides Mihajlovic, are Stefana Veljkovic, Ana Antonijevic, Tijana Boskovic, and Silvija Popovic. That leaves the team without their top two scorers (Boskovic, Mihajlovic); their starting setter Antonijevic; and their starting libero Popovic.

The Final 6 is scheduled to begin on June 27th, which gives that group 3 weeks to rest and train at home with Terzic and their fitness trainer Vladimir Banovic, while the team’s assistant coach Branko Kovacevic takes the team to Argentina.

That is, if they hold on to their spot in the Final 6; otherwise, they’ll rest until late September and the start of the World Championships.

Serbia finished with just 1 win in 3 games in week 4 without Mihajlovic. They beat the Dominican Republic 3-0, but lost 3-2 to both the Netherlands and Italy. That leaves them with a 9-3 record overall and in 3rd place. The team they’re running from is 7-5 Italy (21 points). If Serbia were to lose all 3 matches this week in Santa Fe, and Italy were to win all 3 of their matches at home in Eboli, and Turkey and the Netherlands each win at least 1 match each, then the Serbians would be left home from the Final 6.

While the Italian sweep is certainly possible (they play Thailand, Belgium, and Brazil), even a shortened Serbian squad should be able to pick up a win in Santa Fe. There, they’ll face leaders the United States, a 5-7 South Korean team (that might also pack-up for the last week), and winless Argentina, who has only won 2 sets in 38 played in this year’s Nations League.

One of the criticisms of the new Nations League format was the grueling travel schedule that some teams have to face over 5 weeks, and this decision by Serbia might be a referendum to that: whereas FIVB intended to elevate the level of competition, it might become watered down in cases like this.

Below is Serbia’s roster for week 5. Of note, the team is only carrying 1 player on their 21-woman roster, so they’ll only have one this week in Santa Fe.