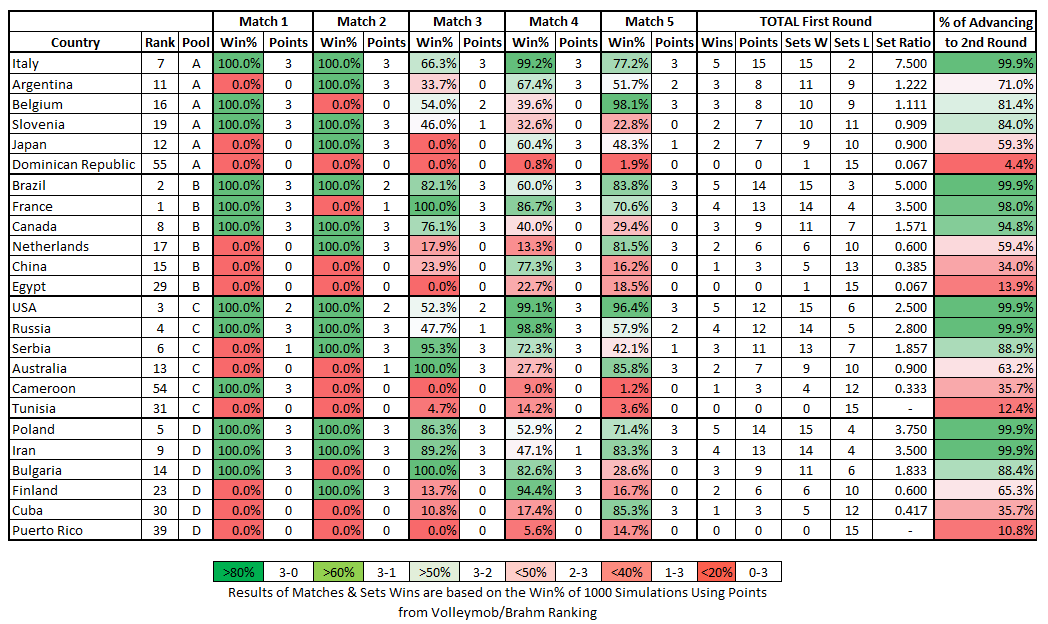 With half of the matches basically being played in the first round of the 2018 FIVB Volleyball Men’s World Championship.... Current Photo via Jeremy Brahm

With half of the matches basically being played in the first round of the 2018 FIVB Volleyball Men’s World Championship. Let’s see how the original Brahm Ranking predictions have fared so far through the tournament and where do we see them going for the rest of the first round.

In Pool A, Italy is performing as expected and still look like they are going to take the pool with a perfect record. In a surprise Slovenia has an 84% chance (up from 58.8% to start) of making the second round after their upset win over Japan on Friday. Even with the projections, they already have more wins and points than Argentina, Belgium and Japan right now, so that gives them a boost. Japan’s loss of Friday have dropped them from 86.5% to 59.3% with two matches to play. Japan is favored against Belgium, but an underdog to Argentina. They could be on the outside looking in if they split their matches. Belgium with an opening day win against Argentina is at 81.4%, up from 69.3%. However, with Slovenia and Japan still to play, their position is anything but certain. Argentina started with a loss to Belgium and are trying to fight their way back into the top four. Still have Italy, Slovenia and Japan to play and if they lose two matches they could be on the outside looking in. The Dominican Republic are mathematically alive, but have a very small chance of defeating Italy or Belgium.

Moving onto Pool B, Brazil, Canada and France are performing as expected, other than Brazil upsetting France in the second match. The Netherlands win over China on Friday have greatly improved the Oranges of advancing to the second round. China have dropped from 50.9% to 34% but have Canada and Brazil to play. Egypt need to beat both China and the Netherlands to have a chance to qualify.

In Pool C, the USA have had a much more difficult first two matches with both going five sets. This has not affected the USA’s chances of advancing to the second round, however at this point in the tournament, the USA has the fewest points of 2 win teams with 4. With only six teams advancing to the third round, the USA’s margin for error is very slim going forward. A win over Russia on Saturday will put them at 3-0 over the toughest teams in the Pool and give the USA a path to a perfect 5-0 first round. While, a Russia win would put the Russians in the pole position until their final match against Serbia, which would possibly be a match to win the pool. Serbia are basically in the same spot they were at the beginning of the tournament. Australia with their win over Cameroon today and the fifth set points from the USA have given themselves a big advantage over Cameroon, which forces Cameroon to win against either the USA or Russia to leap over Australia. While the Australians still have Tunisia to play. Tunisia looks overmatched after only scoring a record low 6 points against Russia in the 2nd set today.

Lastly in Pool D, Poland, Iran and Bulgaria are performing as expected in the pool. Finland’s win over Cuba has put them at a distinct advantage with a match still to play against Puerto Rico. Cuba would need to defeat two of following Poland, Bulgaria or Puerto Rico. In my mind on Puerto Rico looks possible for the Cubans. The winner of the Poland vs. Iran match will likely win the pool.