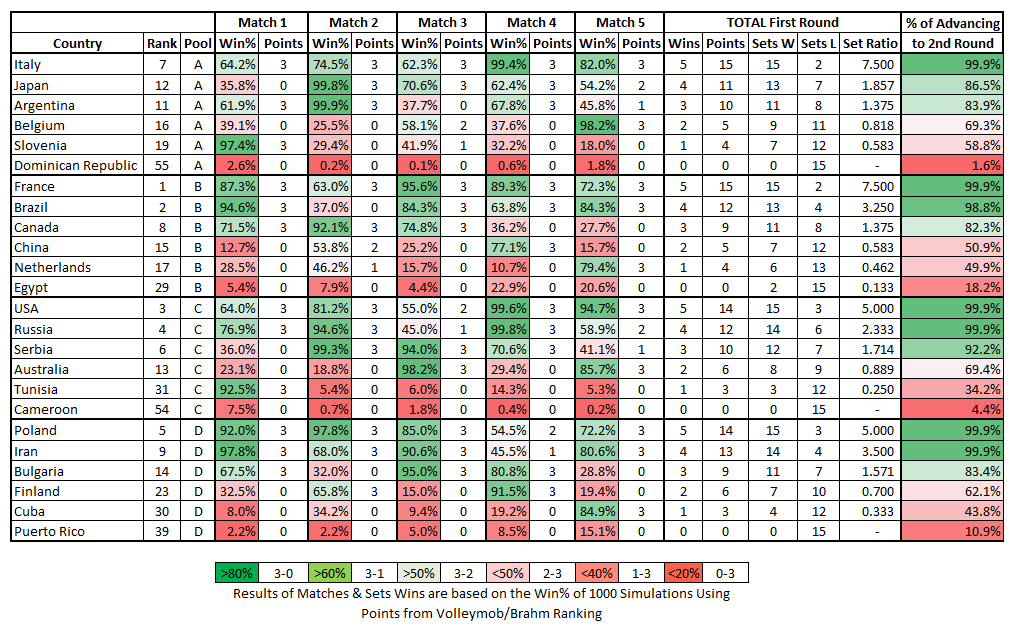 After Volleymob presented the Volleymob/Brahm men’s national team rankings at the end of August, we at Volleymob want to make... Current Photo via Jeremy Brahm

After Volleymob presented the Volleymob/Brahm men’s national team rankings at the end of August, we at Volleymob want to make some predictions using the points data that we had provided.

The picture that you see above is a prediction for each of the pool in the first round of the 2018 FIVB Volleyball Men’s World Championship. Here is how the calculation for each match and pool was created.

With that said, we shall look at each pool to determine which teams will advance and which matches may change these predicted results.

In Pool A, Italy is expected to win all five matches, losing only two sets. In our prediction we have Japan finishing second and this is due to a five set win over Argentina (third place) in the last match, 3-2. I could see Argentina get the win instead, which would put them in second place over of Japan (third place). The data has Belgium taking the fourth position and last spot in the second round. However, I think that Slovenia will surprise Belgium and take the fourth spot instead. The Dominican Republic has only really played in NORCECA events and have not fared well against Canada and the USA, so their odds of making the second round are very small.

For Pool B, France is also expected to win all five matches and also only losing two sets. Brazil follows in second with their only loss to France on the second day of play. Canada should have no problem with the other teams in pool, but they will have difficulty with Brazil and France and finish in third. China and the Netherlands will battle for the fourth position, with China taking it due to a 5 set win over the Netherlands in the second match of play. Egypt would have to beat both China and the Netherlands to have a chance of making the second round. I just do not see it happening as they are outmatched in this pool.

With Pool C being very top heavy with the USA, Russia and Serbia, all three teams have over 90% chances of making the second round. The USA is expected to win the pool with five wins, which includes a 5 set win over Russia in the third match of play. Russia and Serbia will play on the final day for second spot with the Russians also winning in 5 sets and taking second. Australia should easily take fourth spot with wins over Tunisia and Cameroon. Tunisia should beat Cameroon in the only all Africa match of the tournament on the first day to help them finish fifth.

With co-hosts Bulgaria being in Pool D, we expect them to advance, but only in third place. Poland and Iran will be the dominant teams in the pool. Poland will win the pool with a 5 set win over Iran in both teams fourth match. Finland’s biggest competition for the last spot in the second round is with Cuba. Finland will win the head-to-head-match up in 4 sets in their second match. Puerto Rico is just facing much stiffer competition than they would in NORCECA.

We cannot perform a prediction for the entire tournament because they have not established second round schedules for each pool. Let alone for the third round, which will be drawn after the second round.