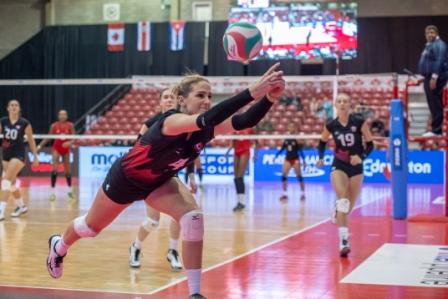 A qualification spot for the 2019 Volleyball Nations League is on the line as the first ever NORCECA Women’s Challenge Cup is underway. Of course, that bid won’t be finalized until this event concludes in a few days, but the first matches are in the books. Both came in sweep form as Canada took care of Trinidad & Tobago while Puerto Rico made quick work of Nicaragua.

The other big note from the day is that Costa Rica has withdrawn from the event, leaving just five teams competing. It also creates an unbalanced number of teams in the two pools. That would have also made it so that Canada and Trinidad & Tobago were the lone match in Pool A, but the schedule has been adjusted so the two will play again to ensure all five teams appear in two matches in group play.

What makes things even more intriguing is that due to Costa Rica‘s withdrawal, this would have been the only scheduled match in Pool A – meaning Canada would have won the group in one match. However, a late change was made to accompany the loss of Costa Rica, so Canada and Trinidad & Tobago will meet again on Saturday. That means as long as Canada wins one set or had a better point differential in a sweep loss – along with any result that is stronger to their side – they would lock up Pool A and take on the winner of Pool B for the NORCECA Challenge Cup victory.

Team Canada captain Kyla Richey: “I always am happy with our effort, but with this squad I only think we’ve have five or six days together competing, so there was a little bit of nerves.  I think to get this first match out of the way, there were some good things, but still a lot to work on. I love playing at home and we need to have more exposure to our youth players. I think for them to see what it means to play for your country is priceless.  The more competition we can have on home soil is better for us and for the young players coming up.”

Trinidad & Tobago captain Renele Ford: “We’ve all been playing abroad and we haven’t been able to practice together. I’m okay with the result in terms of how we fought and how we tried to compete. I’m sure Canada has been practicing for some time together, and they have everything they need, which is a difference between our team and them. They played a great match and we just tried to compete as well as possible, almost as if it was practice for us because we have a long schedule ahead of us in terms of tournaments for the year and this is basically for the teams to get together and mesh and play together.”

The top team according to world rankings in this event made quick work of Nicaragua, winning by an average score of 25-14. That came from balance throughout, as the Puerto Rican side saw a team-high of eight points shared by their two middle blockers in Jennifer Quesada and Alba Hernandez. Nicaragua’s Hellen Traña Lugo countered with a match-best nine points of her own, but didn’t have quite the surrounding parts of the opposition.

Puerto Rico now has the day off tomorrow before taking on Cuba, in what should be a more competitive match based on world ranking. They’re in a good spot to win the pool, but will wait and see what exactly they need to clinch based on tomorrow’s result. For Nicaragua, it would take an elongated tiebreaker and plenty to go their way to still win the pool, but at the very least they can earn a victory over Cuba tomorrow to improve their chances of a higher finish.

Puerto Rican captain Daly Santana: “I think Nicaragua played well, they gave us some challenges. They really challenged our serve. I think for us it was a good match because we really controlled our side. Everything we could control, we did, and we executed our plan really well. This is a good building block for us to start the tournament. I think our serving can be better, a lot more consistent. Our communication was a little off too, so I’d like to see that get a little better for the next few games. There are some fantastic teams here this week, so we will have to clean up our game a bit if we hope to continue winning.”

Nicaraguan captain Claudia Noguera: “We thought it was a good game for Nicaragua. We did the best we can and in our opinion we played some good defense and we tried to do the best we can at attacking and hitting the ball. Cuba is a really tall team and they have a higher block so we have to play the same as we did with Puerto Rico but we have to switch our game a little bit. It has been a wonderful experience because we’ve showed that we can give a little more than people expect from us.”