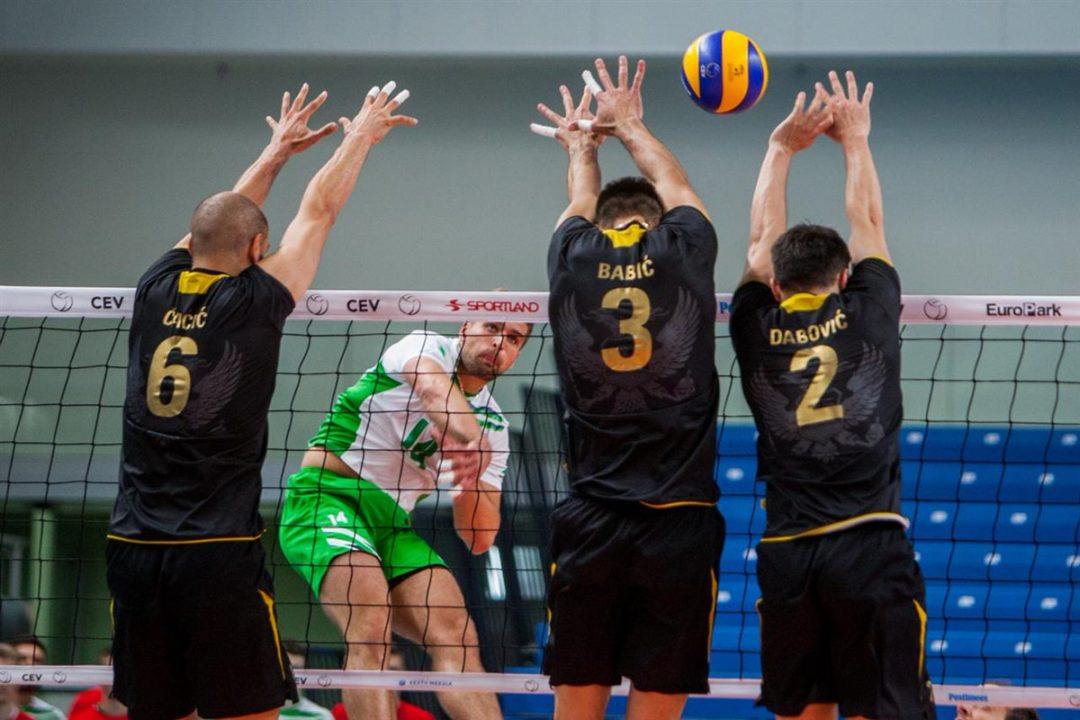 Russia and Estonia remained atop group D with sweeps, while the lone drama of the day came as No. 23 ranked Montenegro had to work for a five-set win over No. 30 Hungary.  Current Photo via CEV Volleyball

Russia and Estonia remained atop group D with sweeps, while the lone drama of the day came as No. 23 ranked Montenegro had to work for a five-set win over No. 30 Hungary. Russia took care of Romania swiftly, while Estonia downed Kosovo to round out the action.

Russia was nearly unstoppable, hitting at a 65 percent clip, behind 10 kills by Maxim Mikhailov, nine by Egor Kliuka and eight by Yury Berezhko.

The Russians led Sets 1 and 3 nearly from start to finish, but found some competition in the Romanians early in Set 2. Romania boasted an 8-7 lead at the first timeout and were still within one as Russia took a 16-15 lead of its own, but saw things slip away down the stretch.

“Romania played really well, especially with their serve,” Russia head coach Sergey Shlyapnikov said. “We had to deal with it and I think we were able to do so quite okay. Taking everything into account, I am very satisfied with today’s result.”

“Russia were the favorites and we expected this kind of result,” Romanian coach Danut Pascu said. “Despite this, it was a good game for us. It was close for most of the time and we lost mainly at the end of each set because Russia has very good and more experienced players. After losing to Estonia and Russia, we now will try to use the next matches to take as much experience as possible.”

As a team, Estonia hit at a 65 percent clip and oublocked Kosovo 8-1 and outserved them 9-1.

Timo Tammemaa was the star of the show, hitting at a 92 percent clip, while racking 16 points, including 12 kills and four blocks. Renee Teppan added 10 points, with six kills, three aces and a block.

“We did not start in the best way when it comes to our concentration and focus but as the match progressed it became evident that our quality was just far better than Kosovo’s,” Estonia setter Andres Toobal said.

“We played better in the first two sets and in the third one our game totally fell apart,” Kosovo captain Valon Nikqi said.

Montenegro led for much of Set 1 only to have its 21-19 lead overturned with a 6-2 final push by Hungary. Montenegro rebounded by issuing a 25-13 drubbing in Set 2 after building a 16-8 mid-set advantage. Set 3 was close throughout, but after trailing 16-15, Montenegro scored 10 of the final 17 in the win. Seven blocks aided the Set 3 comeback. Hungary seized another opportunity to steal away Set 4, down 21-20, grabbing the 28-26 win.

The decisive fifth set saw Hungary jump ahead 5-1, but a pair of Culafic aces helped Montenegro gain a 7-5 advantage, which is would not relinquish.

In addition to his 11 aces, Culafic accounted for 14 kills and three blocks, for a match-high tally of 28 points. Marko Bojic (14), Vojin Cacic (13) and Luka Babic (11) followed with double-digit point tallies. Babic managed a match-best five blocks.

“It is a good result because we gained a lot of confidence and now we just have to believe in ourselves and to the fact that it is possible for us to play against every team,” Hungarian coach Juan Manuel Barrial said.

“We gave away the first set because of our own mistakes and that made the game much tougher for us but the most important thing is the victory we can celebrate now,” Montenegro head coach Veljko Basic said. “This is important for our team spirit and also because we are still in the race when it comes to qualification to the World Championship.”