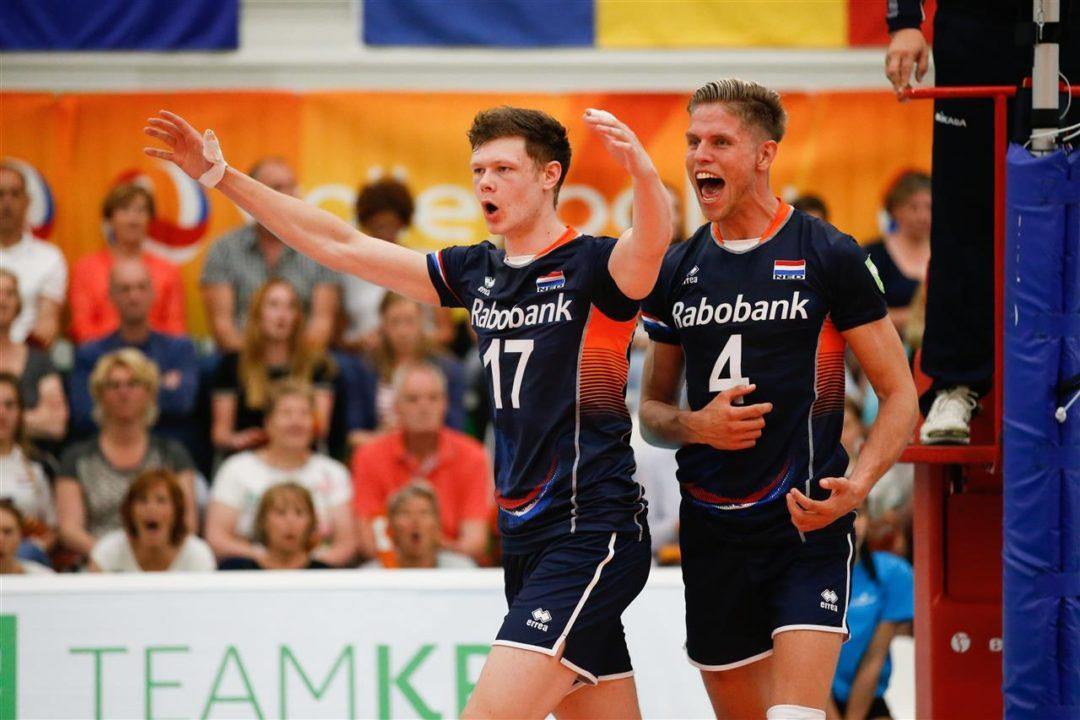 Greece provided the drama on Day 2 of Pool B competition in Koog aan de Zaan, Holland, on Wednesday, staving off Austria in five sets, while Slovakia and the host Dutch team cruised to sweeps. Current Photo via FIVB

Greece provided the drama on Day 2 of Pool B competition in Koog aan de Zaan, Holland, on Wednesday, staving off Austria in five sets, while Slovakia and the host Dutch team cruised to sweeps. The Netherland’s Namir Abdel-Aziz put on a quite a show in the Dutch victory, converting 20 of his 21 offensive opportunities for a 95 percent hitting effort.

Greece won the first two sets and came back to take the final stanza 15-13 to move to 2-0 on the tournament, atop the pool. The Netherlands downed Moldova, while Slovakia topped Luxembourg to round out Day 2 action.

Austria led for much of Set 1, holding a 16-13 edge late, but Greece edged them out in the end with a 26-24 score. Greece carried the momentum into Set 2, leading by as many as four en route to the 27-25 win. One kill and one block were the difference in the stanza. Austria bounced back by leading Set 3 from start to finish, including a 16-9 edge, extending the match with a 25-16 victory. The teams traded points until the midway point of Set 4, but Austria took control at 16-14 and went on to the 25-23 win. Austria led 5-4 early in Set 5, but Greece pushed ahead 10-9 at the second timeout before closing out the match.

“Of course we preferred a 3-0 victory, but since victories are more important than points, we are also happy with this 3-2 score,” Greece’s Mitar Tzourits said.

Slovakia cruised to a 25-17 Set 1 win but had to fight off a pesky Luxembourg attack in the final two sets to pull off the sweep. Slovakia defeated the Small Countries Division European Champions 25-17, 27-25, 26-24 victory.

“We played well at the end of two close sets, and that’s what’s most important to me,” Slovakian coach Miroslav Palgut said. “After our loss to Austria, qualifying for the World Championship will be hard, but we will try everything we can to make this happen.”

A balanced and efficient attack helped Slovakia to the win. The team hit at a 52 percent efficiency and got double-digit point efforts from three players in the victory. Thirteen blocks also contributed to the win.

Kamil Rychlicki led all players with 20 points in the match for Luxembourg, including 16 kills, three aces and a block. Jan Lux added eight points, including four blocks.

“We played very well today,” Netherlands head coach Gido Vermeulen. “This is the level we can play at and we want to show.”