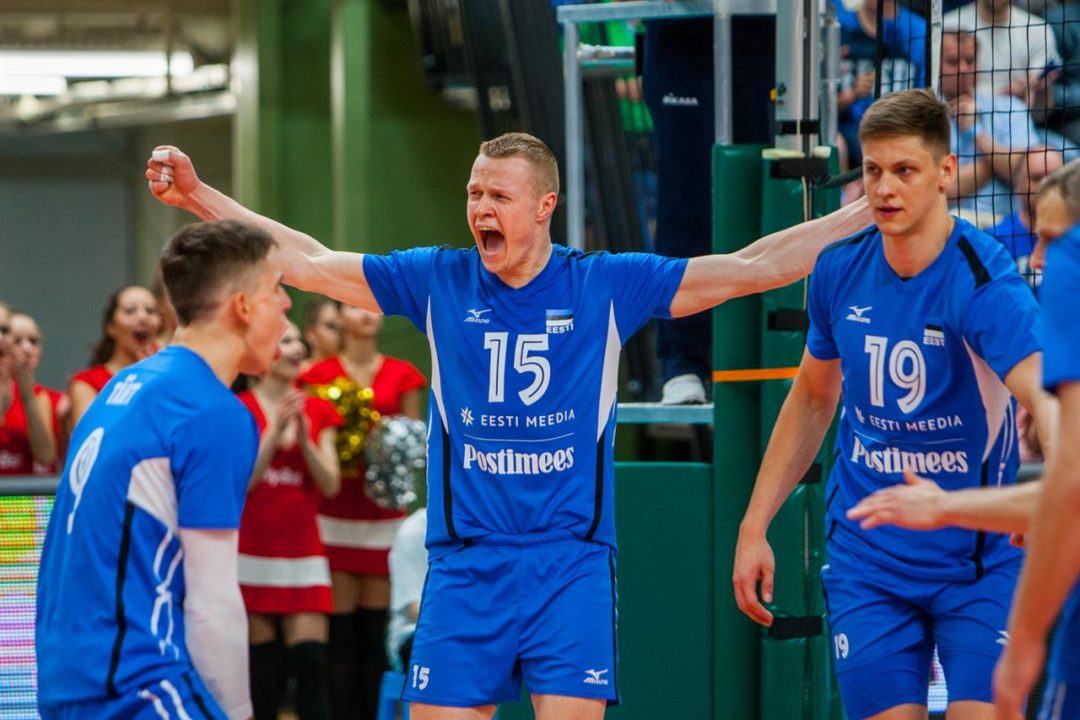 Hungary, Russia and Estonia came through Day 1 of Pool D play unscathed as expected, on a historic day for the Kosovo national team. Current Photo via FIVB

Pool D’s match between Hungary and Kosovo was about more than volleyball, it marked a historic event as it was the first international competition for the Kosovo senior men’s national team. Hungary won the match and Russia and host Estonia also came through Day 1 of Pool D play unscathed as expected in Tallinn, Estonia. No. 3 Russia swept Montenegro, No. 30 Hungary downed Kosovo 3-0 and No. 14 Estonia edged Romania 3-1.

Montenegro led by as many as four in the opening set, but it was nearly all Russia after that in the 25-22, 25-22, 25-18 victory to kick off pool play Wednesday. The Russians had help from 22 miscues, while managing a 55 percent efficiency of their own in the win.

“The first game is always a little bit nervous but I am very satisfied with the result and it gives us a good starting point for the whole tournament,” Russia head coach Sergey Shlyapnikov said. “I am also happy that I had the opportunity to give playing time to younger members of our team.”

Russia broke away at the midpoint of each set, leading 16-14 in the first, 16-12 in the second and 16-10 in the third. Montenegro remained close in the first two sets, pulling within three at 21-18 but could not complete the comeback. In Set 3, Montenegro never recovered from the six-point midset deficit.

“We gave away too many easy points in every set,” Montenegro coach Veljko Basic said. “However, overall I am satisfied that we never gave up and that is a very good sign for the matches to come. We have to improve our service and counterattacks.”

“Fortunately our team’s quality is good enough so that even after losing a set, we did not fall apart and we could still win the match,” Estonia libero Rait Rikberg said.

Estonia cruised to the 25-15 opening set win with help from 13 kills and nine Romanian miscues, boasting a 16-9 lead midway through the stanza and carrying on to the victory. Set 2 was close much of the way, although Estonia held the 8-7 and 16-15 leads at the first two breaks. Eleven Romanian errors aided the Estonian win. Down 2-0, Romania found its block, putting up five stuffs and forcing eight Estonian miscues en route to a 25-22 victory to extend the match. Estonia had no doubt in the final set, stretching the lead to seven at 16-9 and 10 at 21-11 before closing out the victory.

“Romania took a lot of risks but when we managed to hit consecutive serves in the fourth set, we broke away and never looked back,” Estonia head coach Gheorghe Creţu said.

Romania won the blocking battle 9-3, but were outserved by the Estonian side 6-2 and allowed Estonia to hit with 55 percent efficiency.

“There were moments where we lost our focus and the opponents managed to score three or four consecutive points,” Bala said. “We have to avoid this kind of situations. In addition to that, I must say that Estonia was better than us today.

The Romanians were without the services of team captain Laurentiu Lica, who was unavailable due to injury.

Wednesday’s match between Kosovo and Hungary was about much more than wins and losses as Kosovo played its first ever international match as a senior national team.

“It is a historic and very special moment for all of us,” Kosovo captain Valon Nikqu said. “For the last 25 years we only had the chance to play inside Kosovo but now we can play against different countries.”

Despite the provenance for the Kosovo side, Hungary still had a job to do and made quick work of its foe after a mid-set turnaround in the opening stanza. Kosovo charged out to a 13-11 lead in Set 1, but Hungary turned the tables to take the 25-13 win and cruised the rest of the way, winning 25-17 and 25-9 to close out the historic match.

Hungary put up nine blocks and served up five aces, while holding their foe just a 20 percent hitting efficiency in the match. Kosovo was helped by 13 Hungarian service errors in the match.

“We were nervous and made many service errors,” Hungarian coach Juan Manuel Barrial said. “Until the middle of the second set, our game was so-so but then we improved our attack and things went better.”