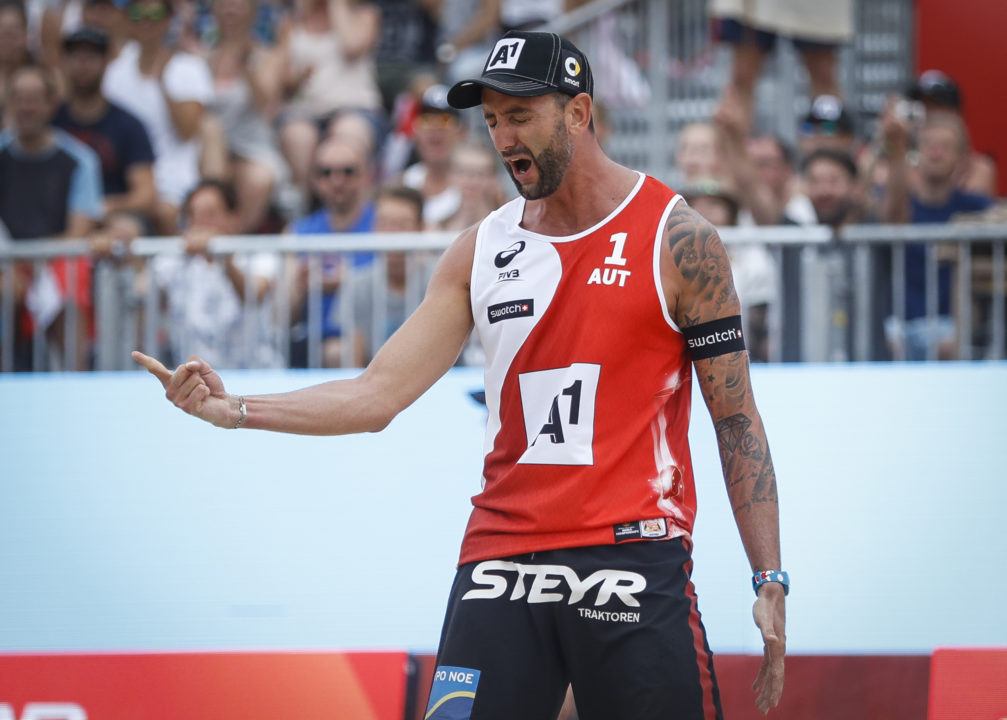 Clemens Doppler (above) and his partner Alexander Horst filled center court with 10,000 fans on Sunday. Current Photo via FIVB

Another day in the books, another 12 matches, and more wins came for the top 12 seeds on the men’s side of the 2017 FIVB Beach Volleyball World Championships. In the second round of play, the top seeds play the 3rd seeded teams in their brackets, so no upsets were expected, though Monday brings that possibility with Ryan Doherty and John Hyden of the USA among the 3rd-seeded teams capable of upsets.

Top-Seeded Teams That Won on Sunday:

None of the American teams played on Sunday, though the best pair from the host nation, Clemens Doppler and Alexander Horst, did play to a sell-out crowd of more than 10,000 fans on Sunday.

“It was a very good game for us,” Doppler said. “Serving is our weapon and we used it very well, being aggressive on it. We were also very consistent on our side out and we fought for every ball. I think today it was very hard to play against us. But the most important thing is to have fun on the court. When that happens, you play more relaxed and that is what we did. This is our goal, to have fun and enjoy this amazing atmosphere.”

“We have a perfect start so far, two games, two 2-0 wins,” Horst said. “Although, it was hard for us because we did not know much about our opponents and it is not easy to play against a team you do not know. We controlled the game with our serve and a good side out and if we play like this we can beat any team. We can always do things better, but in the end we can definitely be pleased about what we did today.”

Their Canadian opponents were also in awe of the crowd, even though the majority of the spectators were there to support their opponents.

Doppler and Horst put big pressure on their Canadian counterparts, landing 67% of their shots (22 kills/33 swings) for the second-straight match. The Austrians performed much better in game 2 than they did in game 1 from the service line. On Saturday, they had 2 aces and 10 errors against Iran. On Sunday, that improved to 8 aces and just 6 service errors, while the Canadian mustered only a single point from the stripe.