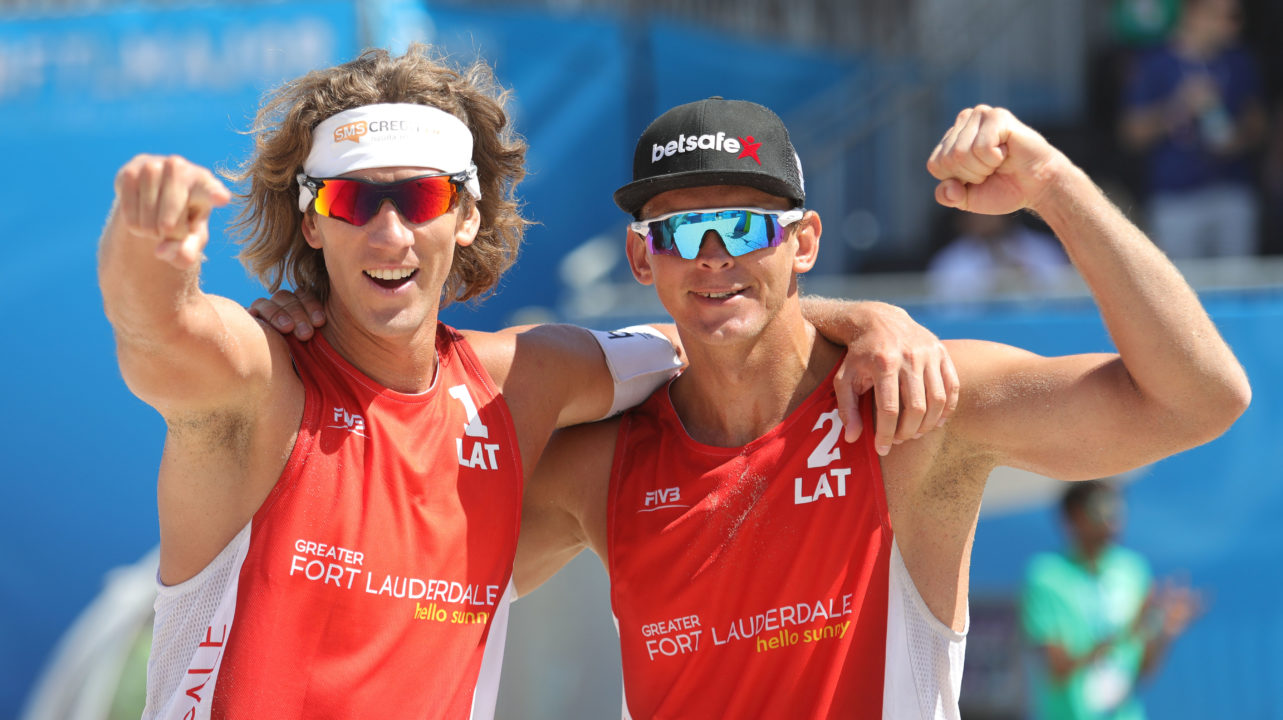 All nine players, including Latvia's Alexandrs Samoilovs/Janis Smedins and Spain's Pablo Herrara/Adrian Gavira, will be in action and representing p1440 at the FIVB Ostrava Four-Star event in the Czech Republic from June 20-24.  Current Photo via FIVB

Kerri Walsh Jennings said her p1440 pro volleyball tour, concert series and health and wellness venture would be open to international athletes of all levels and push to making the sport financially viable. She is proving that to be true in the first round of announced p1440 sponsored athletes.

“p1440’s sponsorship of these talented athletes is a big step in the right direction for the sport of beach volleyball at a national and international level,” Walsh Jennings said. “By directly sponsoring them, we’re changing the game for the athletes—supporting their careers in various ways and lifting them financially. We believe professional beach volleyball athletes should be treated with respect and acknowledged for their dedication, skills and hard work. We intend for these sponsorships to better allow these athletes to focus on their craft; this is a luxury not currently afforded in our sport. Change has come.”

Joining forces with the three-time Olympic gold medalist as p1440 athletes are:

All nine players will be in action and representing p1440 at the FIVB Ostrava Four-Star event in the Czech Republic from June 20-24.

Five of the nine athletes have Olympic experience, with Smedins taking bronze in London in 2012 and Herrera earning silver in Athens in 2004.

The group has found recent success on the FIVB World Tour as well.

Maria Antonelli/Carol were runner up at the Huntington Beach Open in May as well as the Hague Four Star in January.

Smedins/Samoilovs were third at the Fort Lauderdale Five Star in March and finished fourth at the Huntington Beach Open in May.

Gavira/Herrera were third at the Huntington Beach Open in May and fifth at the Fort Lauderdale Five Star.

Evans/Kolinske were the runner up at the Aalsmeer One Star in October and finished third at the Sydney Two Star in November. Most recently, the pair was ninth at the Lucerne Three Star in May.

In addition to the nine P1440 sponsored athletes, Walsh Jennings and her partner Nicole Branagh will be in action at the Ostrava Four-Star event. This will be their first action since the Itapema Four Star in May, at which they finished ninth.

Below are brief bios of each athlete provided by p1440.