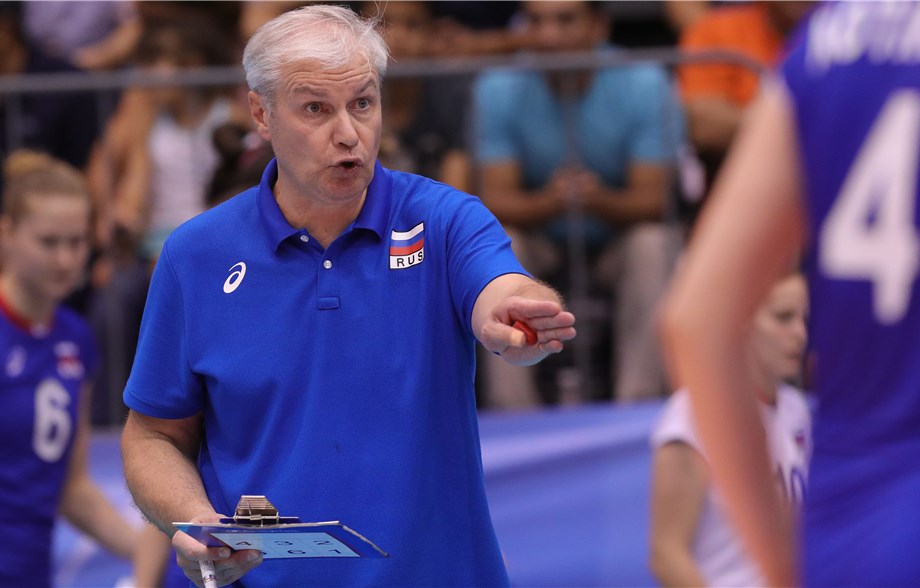 Will Russia have a father and daughter command duo at its national team? Current Photo via FIVB

It is true that the female Russian volleyball national team greatly underachieved in 2017. To start off the season, the squad, who had been coached Vladimir Kuzyutkin for only the seven previous months, finished the FIVB Grand Prix in 9th place and the Grand Champions cup in fourth place out of six teams. Coach Kuzyutkin was then fired on the eve of the 2017 CEV Europan Championship, with his assistant, Konstantin Ushakov, being vaulted into head coaching duties. However, a pitiful performance on the tournament all but destroyed his chances of continuing at the national team’s helm.

Due to its historical prowess, head coaching duties in Russia’s female national team is a highly scrutinized position, drawing a lot attention from the media. The pressure and expectations are so great, that many believe that it led to coach Sergei Ovchinnikov’s suicide. Ovchinnikov, who was the team’s coach during the 2012 Olympic Games, committed suicide three weeks after the team lost to Brazil at the tournament’s quarterfinals.

In comes Vadim Pankov, head coach of Russia Superleague’s Zarechie Odintsovo, also famous for being Ekaterina Pankova‘s dad. According to championat.com, he recently expressed his desire to coach the national team, and that he will soon apply for the job.

The Russian Volleyball Federation should soon receive a report on the year’s activities from Ushakov. Then, there will probably be a choice from the federation or a competition for the post of head coach of the Russian women’s team. I will propose my candidacy, I’m interested

Pankov has experienced success at the command of Zarechie Odintsovo. This year, they are currently in 4th place (5-1 record) through the first 6 games of the season. Although not one of Russia’s richest teams, the squad won the following titles under Pankov’s command:

This season, his daughter Ekaterina Pankova transfered to Odintsovo from Dynamo Moscow to play under her dad. Once one of Russia’s most important players, she fell out of favor with Kezyutkin and Ushakov. She has strong supporting words for his candidacy on Odintsovo’s official website:

I was convinced that Vadim Pankov was the best coach for me because of how he works, how he builds discipline in the team. Discipline is the basis of the Pankov system. The training are rich and very diverse,covering the full range of volleyball elements. Players are always on the move, at work, studying, moving forward. There is no time to relax, the head constantly thinks. Everything is brought to automatism. I dream of playing under him in the national team one day. This is what many other volleyball players want. And most importantly – Pankov himself wants the same.

Coach of Zarechie Odintsovo Vadim Pankov is thinking about changing his jobs. Now in sports everything is built on #finance. There is no money – there are no players. I have very good girls, but they are still being formed. Moreover, it is worthwhile for us to bring up talented volleyball players as it was immediately #lured to another club. We can not hold our athletes for this, again, there is no money. – says Pankov. #ЗаречьеОдинцово #волейбол #чемпионатроссии #вадимпанков #москва #россия #zarechieodintsovo #russiansuperleague #russianchampionship #moscowregion #vadimpankov