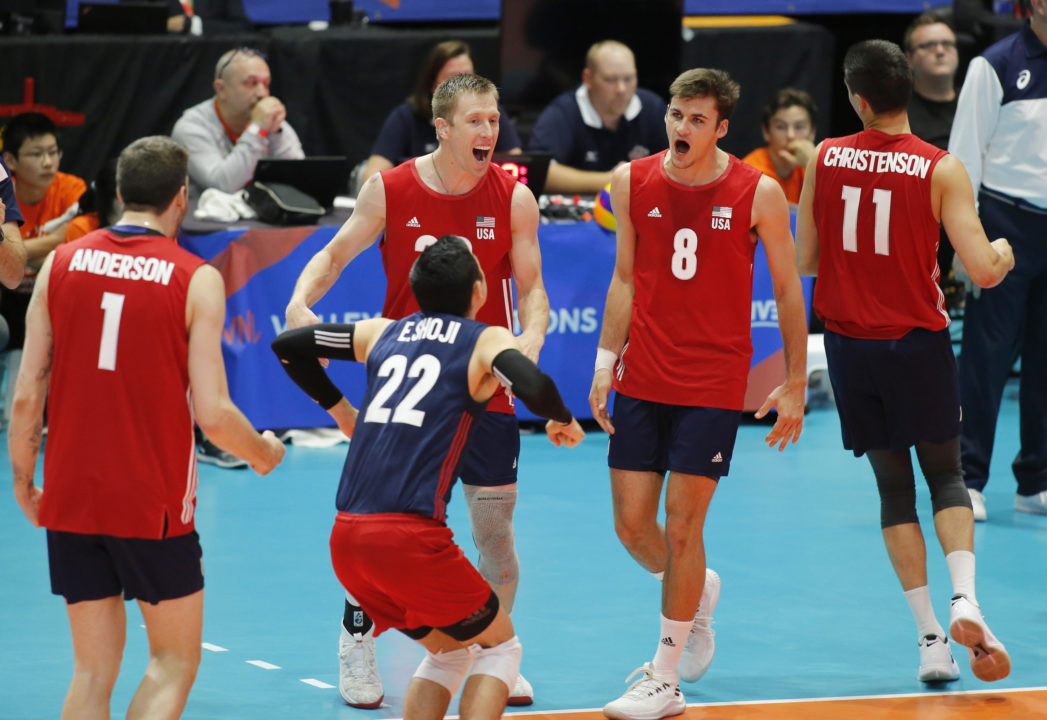 The United States have seemingly righted the ship and will take a two-match win streak into its three-match homestand in Hoffman Estates, Illinois next week, thanks to a four-set win over NORCECA foes Canada in Ottawa on Sunday.  Current Photo via FIVB

The United States have seemingly righted the ship and will take a two-match win streak into its three-match homestand in Hoffman Estates, Illinois next week, thanks to a four-set win over NORCECA foes Canada in Ottawa on Sunday.

A 14-3 blocking advantage sent the Americans well on their way to victory, while a 53-43 edge in kills and 6-3 lead in aces took the team the rest of the way. Team USA still has work to do eliminating errors, giving away 28 points on miscues, but were aided by 25 Canadian errors, limiting the damage.

The United States went mostly with a veteran roster for the second straight day, this time swapping out David Smith and Max Holt for Dan McDonnell and Jeff Jendryk.

Ben Patch took the lead role in the match, scoring 18 points with 14 kills, a team-leading three aces and a block. Matt Anderson (15), Holt (15) and Smith (10) also turned in double-digit scoring efforts, while Aaron Russell notched eight points in just three sets of work. Anderson chipped in 10 kills, three blocks and two aces, while Holt added 10 putaways to go with his match-high five stuffs. Smith turned in eight kills and two stuffs and Russell tallied seven putdowns before exiting in favor of TJ DeFalco, who chimed in with four kills and a block.

Canada went up 16-13 in Set 1, but Team USA evened the score at 18 behind Christenson. Tyler Sanders came through for the home side to clinch a 25-23 victory.

Patch starred from the service line giving the Americans the lead in Set 2, one which they would not relinquish in a 25-13 crushing.

Patch continued his strong serving in Set 3 and Holt and substitute DeFalco chimed in offensively to grab the U.S. the 25-19 victory.

Set 3 saw United States coach John Speraw receive a yellow card, but it did not deter his troops. Smith was a force at the net and Anderson aided the American cause in a 25-20 win to give the U.S. the road win.