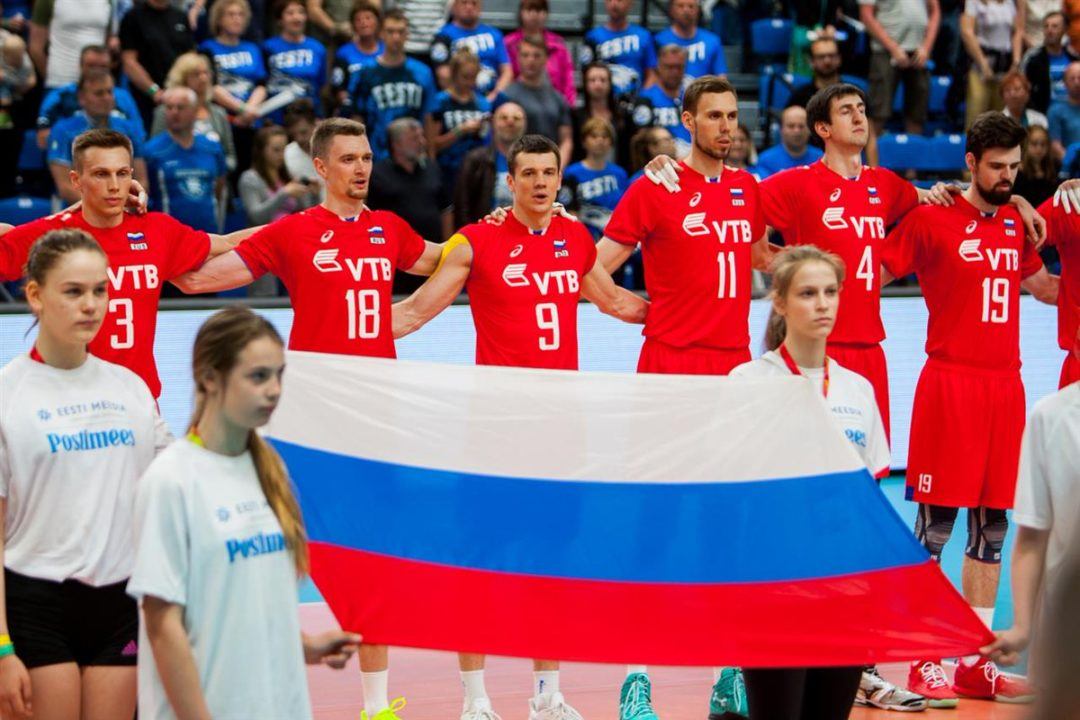 The battle for Pool D's automatic bid to the World Championships came down to No. 14 Estonia and No. 3 Russia and rankings held despite a strong Estonian first set.  Current Photo via Russia Volleyball

The battle for Pool D’s automatic bid to the World Championships came down to No. 14 Estonia and No. 3 Russia and rankings held despite a strong Estonian first set. The host team will now have to battle through the third round of European qualifying to vie for a Worlds berth.

Estonia and Russia battled it out for Pool D’s spot in the World Championships and in the end the Russian serve helped the favorites upset the home-standing Estonian side 21-25, 25-21, 25-18, 25-19.

Russia served up 10 aces in the match including a few decisive ones at the end of Set 2. The Russians also were aided by a 57 percent hitting efficiency and 12 blocks.

In addition to the serve, the Russians changes setters from starter Sergey Grankin to Dmitry Kovalev in Set 2 and swapped out Dmitrii Volkov for Yury Berezhko, both of which had a major impact on the match.

“It worked in our favour that we have so many equally strong players,” Russian head coach Sergey Shlyapnikov said. “Still at the beginning of the match we were too tense, Estonia had a superb serve and a raucous support from their fans. The end of the second set was very important considering the outcome of the match and in the third and fourth sets our players were more relaxed.”

“His serves were truly decisive,” Estonia outside hitter Robert Taht said. “With that, we let Russia get back their confidence and in the third and fourth sets there were moments where the difference in power between the two teams was evident.”

Russia led nearly throughout in Set 3 and 4 en route to the win and the World Championships berth.

Romania ended its stay at the European qualifiers with a three-match win streak, concluding with a sweep of Hungary on Sunday. Romania won the match 25-19, 26-24, 27-25.

Romania led Set 1 from wire to wire, but faced a tougher test from the Hungarians in Sets 2 and 3. Romania led 8-4 in Set 2 only to see the advantage slip away as Hungary rallied to leads at 16-15 and 21-20. The Romanians righted the ship, however, to steal back the 26-24 win despite being outhit 48 percent to 38 in the stanza. Hungary led 8-5 early in Set 3, but Romania boasted a slight 16-15 edge at the midway point before hanging on for the 27-25 win and the sweep.

Romania outblocked Hungary 13-6 and outserved their opponent 4-2, while hitting at a 55 percent clip for the match.

“We served better and our attitude was also superior,” Romanian captain Laurentiu Lica said. “We were in a better mood, so to speak. However, if we look ahead, Hungary has three, four very promising young players. We got better with each game, against Estonia and Russia we could not do much but after that we raised the level of our performance. Still, one thing we really have to learn is to be careful and to respect our opponent.”

Hungary got 16 points from Krisztian Padar, all on kills, while Szanolcs Nemeth added 10 points with seven kills and two aces.

“We were not at the same level in terms of aggressiveness than in the previous matches,” Hungary coach Juan Manuel Barrial said. “We tried to fight with them, especially in the second and third sets but they closed the sets better.”

Montenegro put up 13 blocks, while allowing none and also held Kosovo without an ace in the victory. The victors also managed a 56 percent hitting efficiency, committing just seven errors.

“We started our preparations a bit late, some our players came back from injuries and some ended their club season as early as in February,” Montenegro head coach Veljko Basić said. “We had a very good game against Russia and the match with Estonia was also very, very close but in the last two games we were very tired.”

“This tournament was a very good experience for us,” Kosovo captain Valon Nikqi said. “Physically we were not very good because our preparation lasted only ten days and as a result, our game swayed a lot. Sometimes we played really well, sometimes really bad.”