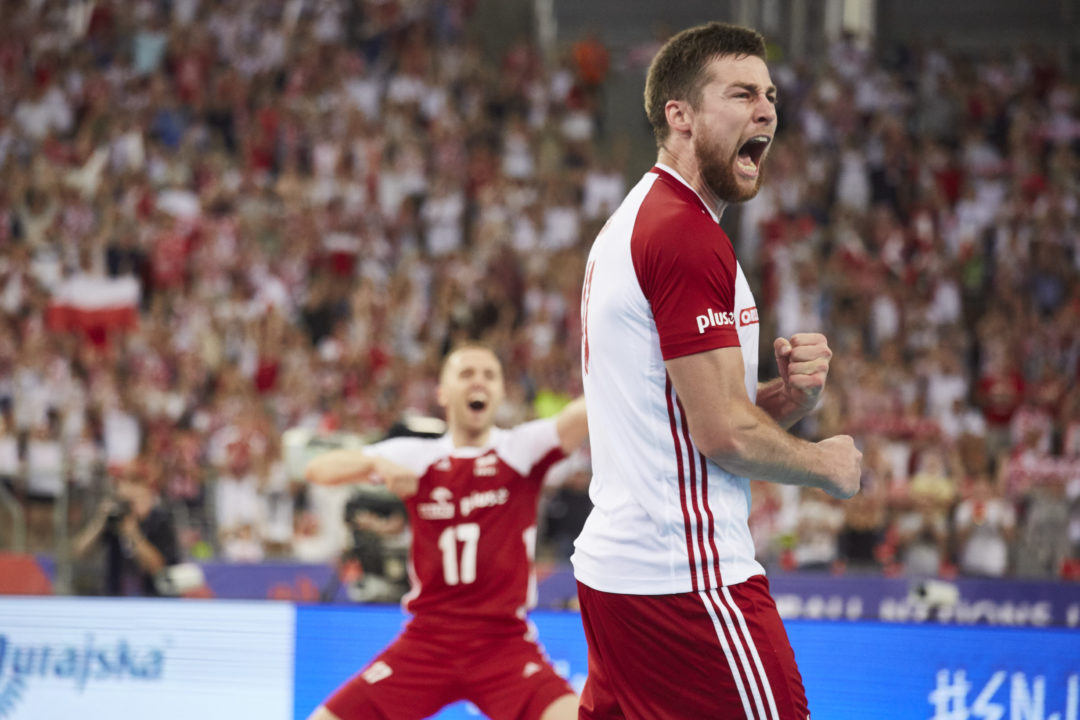 Nine blocks and 24 French errors as well as a key substitutionary effort by Dawid Konarski lifted Poland to a sweep of France and a perfect 4-0 VNL mark. Chuan Jiang turned in a match-high 24 points for China, but it was not enough to lift the team to an upset of No. 10 Germany.  Current Photo via FIVB

Nine blocks and 24 French errors as well as a key substitutionary effort by Dawid Konarski lifted Poland to a sweep of France and a perfect 4-0 VNL mark.

Stephen Boyer paced France with 13 points (12 kills, 1 block), but played just as a substitute in Set 3. Kevin Tillie chipped in 11 points (9 kills, 2 aces) and Julien Lyneel added seven points (4 kills, 2 blocks, 1 ace). Boyer was replaced in the starting lineup in Set 3 by Jean Patry, who managed just three points, all on kills. France was without week 1 top scorer Earvin Ngapeth, setter Benjamin Tinoutti and libero Jenia Grebennikov, who were all left at home. Trevor Clevenot, who was added for Week 2, did not play.

Poland trailed by as many as six in Set 2 when it turned to Konarski to save the day. He delivered two kills to kick off a 9-0 run for the Poles, turning a 17-13 deficit into a 22-17 lead. Bieneck also served up two aces in the rally. After that Poland closed out the 25-20 win.

Chuan Jiang turned in a match-high 24 points for China, but it was not enough to lift the team to an upset of No. 10 Germany.

Jiang accounted for 21 of China’s 45 kills, and also added two blocks and an ace. Libin Liu was next on the team with eight kills to go with two blocks and two aces. Shuhan Rao tacked on nine points with six kills and a team-leading three blocks.

China rallied to a 12-10 advantage in Set 1 and carried on to the 25-23 win. Fromm took over from there, guiding Germany to victory.