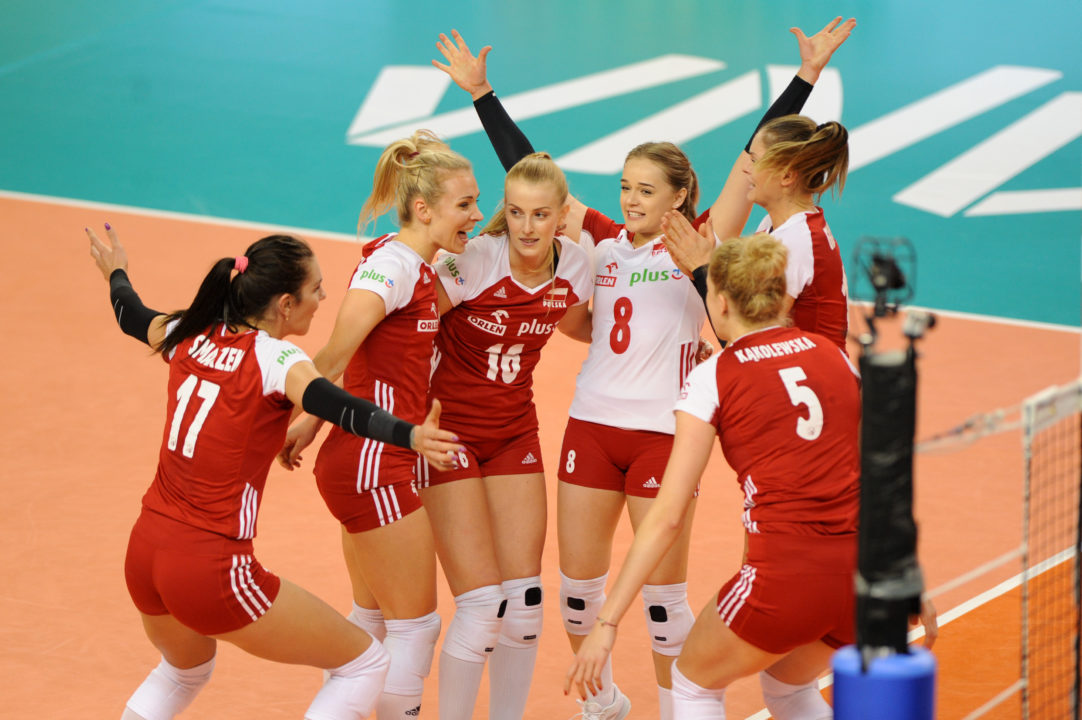 After falling behind 2-1 in the match, Japan dug deep and pulled out two deuce sets for the win over the Dominican Republic. Poland put up 10 blocks and served up nine aces in a crushing sweep of Russia on Wednesday.  Current Photo via FIVB

After falling behind 2-1 in the match, Japan dug deep and pulled out two deuce sets for the win over the Dominican Republic.

Sarina Koga led a group of five Japanese players with double-digit point tallies. Koga notched a team-best 24 points, all on kills, while Nana Iwasaka (15), Risa Shinnabe (14), Mami Uchiseto (10) and Mai Okumura (10) rounded out the group. Shinnabe added 12 kills, while Uchiseto and Iwasaka added 10 putaways each. Iwasaka and Okumura put up four blocks apiece to lead the team at the net.

The Dominican Republic boasted the top two scorers in the match in Yonkaira Pena Isabel (28) and Brayelin Martinez (25) and also boasted a third 20-point scorer in Gaila Gonzalez Lopez (21). Pena Isabel racked up a match-high 26 kills, a block and an ace, while Martinez downed 25 kills. Gonzalez Lopez chipped in 16 kills and a match-high five blocks. Annerys Vargas Valdez and Lisvel Mejia followed with four and three stuffs respectively.

The teams were neck-in-neck in Set 3 but Pena Isabel was the X-factor, helping the DR to a 24-21 advantage. Vargas Valdez and Gonzalez Lopez capped the 25-22 win with a stuff.

The Dominican Republic offense excelled in Set 4, but Koga answered and helped Japan to a 29-27 win to send the match to a decisive fifth set.

In Set 5, Japan built a two-point lead after the changeover and held on for the 15-13 win and the match.

Poland put up 10 blocks and served up nine aces in a crushing sweep of Russia on Wednesday.

Malwina Smarzek, the top scorer in the whole VNL tournament, lived up to billing for her team again with a match-high 20 points on 16 kills, three blocks and an ace. Natalia Medrzyk and Agnieszka Kakolewska followed with 14 and 10 points respectively. Kakolewska managed eight putaways and two blocks, while Medrzyk served up a team-high four aces and tacked on three blocks and seven kills.

Natalia Malykh led the way for Russia with 16 points (15 kills, 1 block), while Irina Voronkova also reached double-digits with 10 points, all on kills. Ekaterina Lyubushkina was next with eight points (5 kills, 2 blocks, 1 ace).

The teams were fairly even in Set 1, with neither leading by more than two, but in the end, Poland finished off the 25-21 win on Smarzek cross-court putaway.

Poland went up 15-10 in Set 3 and increased the lead to seven at 21-14. A stuff by Zuzanna Efimienko-Mlotkowska set off a final 4-1 run to clinch the sweep.