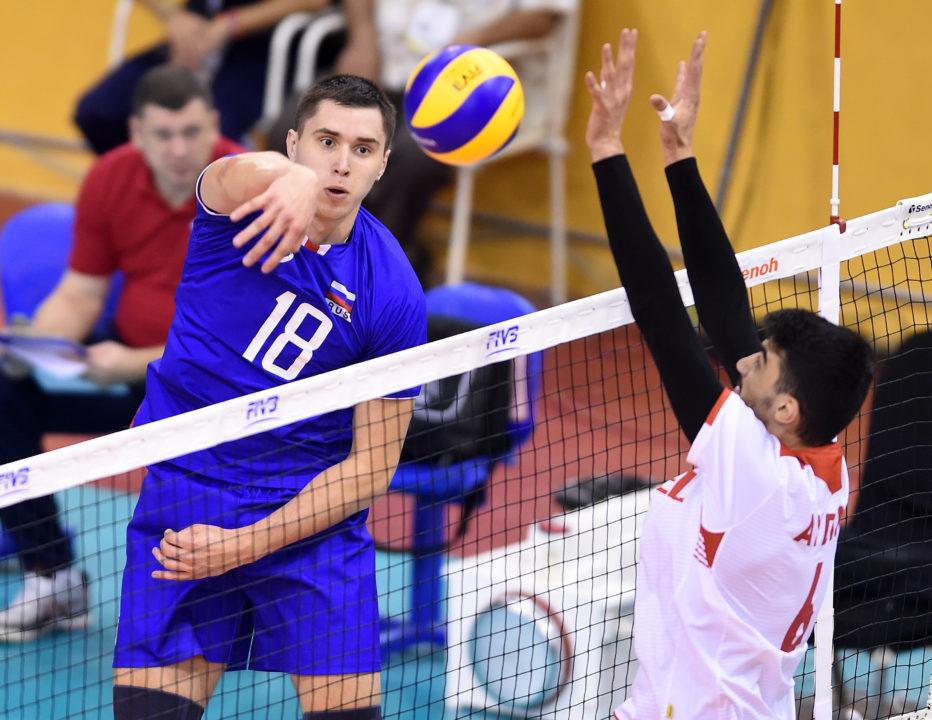 Favorites come out on top on the second day of play in Egypt. Archive Photo via FIVB

Russia and Brazil still haven’t lost a set after two days of competition. Are the new rules favoring these traditional teams? Could this be a mirror to what is to come in senior play if FIVB adopt these rules? It is not implausible to speculate such, as U23 teams are the closest you can get to the real deal. Here are the recaps of an action packed Saturday in Egypt.

Japan registered their first win at the 2017 FIVB Men’s U23 World Championship, demolishing Mexico 4-0 (15-12, 15-12, 15-11, 15-10) in 58 minutes and leaving the American side winless and setless after two matches. Ridl Garay was Mexico’s best scorer with 8 points. Japan overwhelmed Mexico on the net and also took advantage of 20 unforced errors by the losers. Jin Tsuzuki with 11 points and Masato Katsuoka with 10 (including three aces) led the scoring for Japan. At no point during the match did Japan feel threatened, finishing the game with a 54% attacking efficiency.

Japan coach, Tokunaga Fumitoshi: “Yesterday I was very sad, because of our defeat, but today I am very happy to have won in straight sets and taken the three points. I am satisfied with my players who did a good job today and followed my instructions.”

Japan captain, Oya Masaki: “I am happy for the win today. Yesterday we lost the game but we learned a lot of things to help us win today.”

Mexico coach, Jose Luis Guevara: “We tried to play well, but Japan were very strong. We learn and get experience from every match we play.”

Having suffered a narrow defeat at the start of their FIVB Men’s U23 World Championship campaign against Argentina, world No.7 Iran rebounded with an impressive straight-sets win(15-12, 15-12, 15-8, 15-13) win against world No.17 China. Iran surprised their opponent with massive attacks from all directions which wasn’t tolerated by the Chinese defense. With this victory, Iran improved their win- loss ratio to 1-1, while China dropped to the same score after they had a surprise victory over Turkey at the opening match.

Iran coach Juan Manual Cichello: “It was a good match for us and it compensated our loss yesterday to Argentina. We attacked today more aggressively than yesterday and we were better. We played very well and when we have a victory it is very important to us.”

Iran Captain Rahman TaghiZadeh: “It was compassionate and merciful. It was a recovery match for us after losing to Argentina. China were a strong team but we were better and we attacked very well. I hope we will continue victorious as today.”

China Head Coach Ju Genyin: “I am satisfied with how we played because we are very tired from yesterday’s match against Turkey. The Iranians were seating and watching us during the match so they studied us very well and the way we were playing. My players were very tensed from the beginning and that is why they lost. They only regained their shape by the fourth set and that is why we were sometimes leading over Iran.”

China Captain XU ZhenSen: “We did not play well as we were tired of yesterday’s match. We will concentrate more tomorrow and I hope we will win

Brazil shut out Poland 4-0 (15-10, 22-20, 22-20, 15-7), but it took the South Americans an hour and 23 minutes to get the job done after a couple of very tight sets. Brazil, the 2013 U23 world champions, retain a perfect record at the top of Pool A after two matches. Poland blew a set point in the second and two more in the third, but on both counts Brazil persevered and finished them 22-20 after eight and six set points of their own respectively. Rodrigo Leão with 14 points and Gabriel Candido with 13 led the South Americans, who pressed from the service line, scoring seven aces to Poland’s one.

Brazil coach, Giovane Gavio: “It was an amazing game. Both teams played very well and little details made the difference and gave us the victory. We will prepare for the next match against Egypt who played well yesterday – and we should be careful.”

Brazil captain, Fernando Kreling: “We dream of playing in the final. We played a good game today and the difficulties we faced in the second and third sets were good experience for us.”

Poland coach, Dariusz Daszkiewicz: “We played a good game but some players had some problems. I hope to meet Brazil again maybe in the final and that time we can beat them.”

Poland captain, Rafal Szymura: “It was a tough match. We played well, but Brazil was better than us today

Argentina maintain momentum with a second victory over Algeria 4-0 (15-11, 15-8, 15-9, 15-12) on Day 2. What made the victory easy for the South American was their sharp attacks led by Ignacio Luengas who was the match scorer with 12 points. Algeria emerged only in the fourth set when they improved the reception to create some problems for the winners who proceed to pick the tough set 15-12 and the match 4-0.

Argentina Coach Camilo Soto: “It was difficult to play against a team we knew nothing about beforehand but it was a good one. I am happy because it is important for the team to win. What is important for me is to read the game, to put good solution and play it well technically.

Argentina Captain Matias Sanchez: “It was a long match and it was difficult to say who will win. We had a lot of problems because the players were suffering after yesterday’s difficult match but we are happy to be the winners.”

Salim Bauhalla Algeria Coach: “I think Argentina is a very good team as they are playing in harmony as if they have training together for 4 or 5 years. We also lost to Russia yesterday and today to Argentina but this is not the end as I think both teams will reach the finals. What is more important is that we are improving from one match to the other.”

Abdel Raouf Hamimes Algeria Captain: “It was a very strong match and the Argentinians had the upper hand from the beginning .We were unable to defend back. We tried but we were unable to reach their level. Our objective is to gain experience from every match no matter if we are losers or winners.”

Cuba scored their first win and handed hosts Egypt their first defeat in a 4-2 (13-15, 16-14, 10-15, 15-12, 15-11, 18-16) thriller. Egypt had the opportunity to go two sets up at the beginning of the match, but the hosts dropped a set point at 13-14 and allowed Cuba to make a three-point run and finish the set off on an ace by Marlon Yang. Again in the sixth Egypt could have taken the Caribbean side all the way, but failed to capitalize on 8-11 and 11-13 leads, as Cuba rallied to reach first match point at 14-13 and finished the game on their fourth attempt with a kill from the middle by Osniel Melgarejo. Miguel Lopez led Cuba with 17 points and Malgarejo added 13, but Egypt’s Hisham Ewais was top scorer of the game with a tournament-high of 29 points.

Cuba coach, Nicolas Vives: “We played against a very strong opponent but we had studied the Egyptian team well from their game against Japan. We didn’t start the game well but fortunately we came back and managed to beat Egypt on their home court, although my players are aged only 18 and 19 years.

Cuba captain, Adrian Goide: “It was a tough game against Egypt, but we got confidence after the second set to win the match and increased our performance in the fifth and sixth sets. We are very happy to have won this tough match.”

Egypt assistant coach, Hassan El Hossery: “We played against a big school in volleyball with players of high standard, so needed to quickly win the match and we had to fight until the last point. Our strategy to put pressure upon Cuba throughout the match and we managed do that in the first set, but we missed key player Ahmed Galal due to injury.”

Egypt captain, Ahmed Deyaa: “Today we faced a strong team, we pressed Cuba hard, but unfortunately we didn’t continue and gave them the chance to win the match. We hope to win the next matches and qualify for the semifinals.”

Russia, current World Champions, handed Turkey, current Vice World Champions, a 4-0 (18-16, 15-13, 15-6, 15-13) loss behind Denis Bogdan’s 17 points.  While Russia was the favorite to win the game, it is still surprising to see the last tournament’s runner ups so soundly beaten.

Russia Coach Andrey Voronkov: “The match was not easy for us. Turkey is a good team. We did not have many mistakes today so that is why we won. If Russia won two years ago, this does not mean that we will be the winners. We have to concentrate on every match and more attention is given to every match to be able to make it successfully to the finals.”

Russia Captain Matias Sanchez: “We were prepared to the Turkish team. We did our best but it was not an easy match for us. Our problem was the new rules special concerning the service because we have strong service.”

Turkey Coach Arig Resat: “We did not play well in the fourth and last set. We did a lot of mistakes at the end because my players are not very experienced and some players are sitting on the bench all through the national league. The Russian players play much more matches in their league than us. We are getting experience through these matches.”

Turkey Captain Yasin Aydin: “It was a very strong match but today we played better than yesterday and tomorrow we will try to play better to win and have a chance to proceed to the coming round. I think Russia is a very good team as they are playing in harmony training together for 4 or 5 years.”