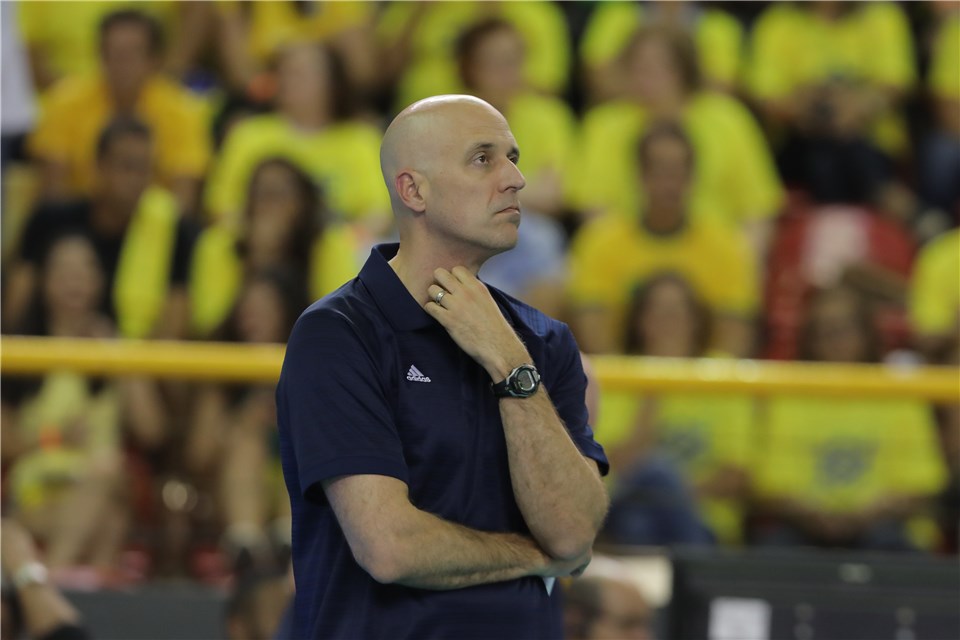 John Speraw, head coach of the United States, went to his bench early to secure a comeback win over Japan. This strategy was much different than what he utilized in the first weekend of play in the Volleyball Nations League.  Current Photo via FIVB

The United States National Team found themselves off to a similar start to the weekend in the Volleyball Nations League as they did a week ago. After dropping a pair of sets 23-25 and 13-25 to Japan, they found themselves having their backs against the wall in order to salvage some points from the match. This was a familiar scene to last Friday against Argentina when they also lost Sets 1 and 2. While they both had the same results (the United States winning in 5 sets), John Speraw took markedly different approaches to achieving each victory.

Once difference was who Speraw put on the court to start the match. Matt Anderson was starting at opposite in place of Ben Patch. Micah Christenson was also handling the setting duties instead of Kawika Shoji. Aaron Russell was back in the starting lineup alongside TJ DeFalco at the outside hitter position. Jeff Jendryk, Dave Smith, and the libero, Erik Shoji, were the only players who started against Argentina and Japan.

While the lineups were different, the most noticeable change in Speraw’s strategy from the bench was how quickly he used his reserves. When things were not going well (they committed 14 of their 29 errors in Set 1), he was quick to pull the trigger and make moves which eventually led the team to victory.  Last week he made almost no changes during matches, but let the team on the floor make play through difficult stretches. What might be seen as the most remarkable aspect of his decisions was the fact that he pulled some of the players with the most experience in favor of players with fewer international matches to their credit.

Speraw did not simply try a lineup consisting of the players who are not regulars to the lineup and then put the players he normally starts back on the floor when the match did not go as planned. He pulled Micah Christenson and Matt Anderson in the 2nd set. These men have been arguably the most influential players for the United States since Speraw took over as the head coach back in 2013. It is true these players must be fatigued at this point in the summer. They both played each other in the finals of the CEV Champions League back on May 20, 2018. In the case of Matt Anderson, he is tasked with changing positions from outside hitter to opposite for his role with the USA. These could be factors in their difficult outings today in Brazil.

Dave Smith, the captain, was also replaced in Set 2 in favor of Taylor Averill. Smith had been a part of the Olympic squads with Matt Anderson in 2012 and 2016. He has been included in roster for the United States on 174 occasions counting today. Anderson is the only player representing the United States in this tournament with more appearances. TJ DeFalco, relative newcomer to this stage and going into his senior season at Long Beach State University, was the last of the 4 players to be replaced in the 2nd set.

Ben Patch continued his impressive streak in this tournament. The opposite who just finished his rookie reason with Tonno Callipo Calabria Vibo Valentia in the Italian SuperLega, ended up leading the way with 15 points. This included a team-high 4 points in the 5th set. His 14 points came by way of a 63.6% attack average.

Thomas Jaeschke came off the bench to contribute 7 kills and hit 70% in the comeback win. He also remains one of the most impressive passers in serve receive for the United States, just behind Erik Shoji at libero. Jaeschke was also gave the most impressive performance from the service line. While he and Kawika Shoji both led the team with 2 aces, pressure provided from Jaeschke’s serves led to more points than anyone else for the USA with the exception of  Taylor Averill.

Taylor Averill, a middle blocker who just finished a season playing for Andrea Giani, finished with 1 ace, 2 blocks and 5 kills after coming in during the 2nd set. While Kawika Shoji only set him 6 times, it was an effective connection leading to an 83.3% success rate.  Jeff Jendryk, the other middle blocker who just finished his collegiate career at Loyola, was not too much of a contributing force on offense. He was one of the only 2 players not to get replaced and only registered 2 kills in 8 attempts. Jendryk led the team in blocks with 6.

Aaron Russell got off to a slow start, scoring only 3 of his 14 points in sets 1 and 2.  He put forth a giant effort in the 4th set to force a tie-break when he led the team with 6 points. Russell finished the match with 11 kills, 2 blocks, and a service ace. This was his first match in this tournament as he was left off the roster last weekend. Russell just finished winning the championship in the Italian SuperLega and a bronze medal in the CEV Champions League with Perugia. As with Anderson and Christenson, he played his last match with his club team back on May 20th.

While the United States has dropped 2 points out of a possible 12 so far, they remain unbeaten at 4-0.  With Italy’s 3-1 defeat to Canada, that puts them in 2nd place. Poland is the only other team with a perfect 4-0 record. The fact they have earned a perfect 3 points in each match puts them in 1st place with a 12-10 points advantage over the United States. The United States will play Korea (0-4 thus far) on Saturday.