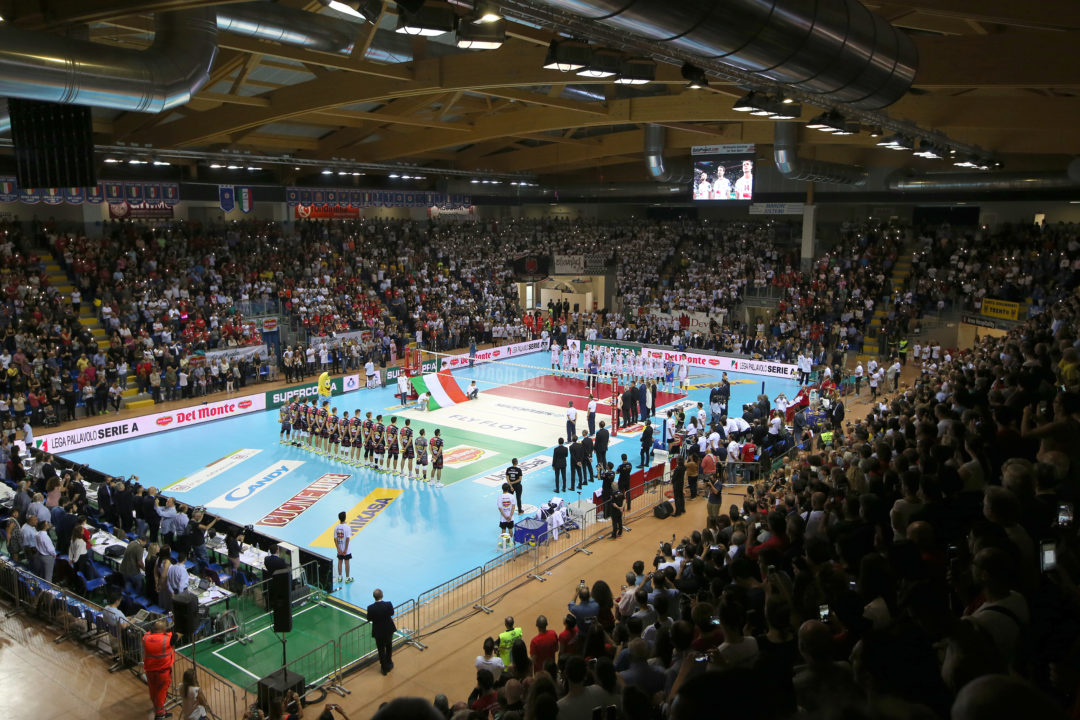 The Italian professional volleyball season kicks off this weekend with the Italian SuperCoppa.  Current Photo via Italian Volleyball League

The Italian SuperCoppa traditionally pitted the winner of the the Italian Serie A1 against the winner of the Coppa Italia in the opening act of the Italian volleyball season. Back in 2016 the format was changed to include the two next-best teams in the Italian SuperLega from the previous year. We now have the two-day affair which features four of the best teams in Italy, Europe, and the world. The format follows the same as the CEV Champions League (up until last year), the FIVB Volleyball Nations League, and the FIVB World Championships. There will be a pair of semifinal matches on Saturday. The loses will play for the bronze medal on Sunday, and the winners will play for the championship.

Perugia is coming off of their best season in their club’s history. While they took every domestic trophy, they still failed to reach the final of the CEV Champions League. Not content with their newfound success at the top of Italian volleyball, they spent the off-season getting even stronger. They went out and got the best player in the world, Wilfredo Leon. The Polish (by way of Cuba) outside hitter left Zenit Kazan in Russia after winning everything there is to win in professional volleyball. Perugia doubled down on Aleksandar Atanasijevic and let Ivan Zaytsev leave to play opposite for Modena. They used Zaytsev as an outside hitter this past season, and that is not his more natural position. Perugia also needed another Italian outside hitter, so they swapped Aaron Russell for Filippo Lanza.

It will be interesting to see if everyone plays this weekend since the FIVB World Championships just ended, but DeCecco was already back in action in a preseason tournament. They saw the necessity for him to establish his connection with Leon. Podrascanin will be back in the middle, but they added Galassi from Trentino after the departure of Simone Anzani.

There are a lot of new pieces to the puzzle for Trentino, though they were able to rebuild their roster with some world-class talent. Jenia Grebennikov is seen as one of the best liberos in the world. He found himself having to leave Lube Civitanova when they needed more Italian players on their roster. Aaron Russell, Uros Kovacevic, and Srecko Lisinac all took part in the semifinals and medal matches at the World Championships last weekend, so it is uncertain if they will be suiting up for their club this weekend. Simone Gianelli has been running the floor for Trentino since he was 18 years old. At 22 years old, he has been a consistent feature in the lineup.

Lube had a fantastic record of reaching the finals of major competitions last season. They reached the finals of the SuperCoppa, the Coppa Italia, the Club World Championships, the Champions League, and the Italian SuperLega. They brought home exactly zero trophies after all of that. They lost to Perugia in the finals of all three domestic competitions, and they fell to Zenit Kazan of Russia in the finals of the international tournaments. They were quite busy over the summer retooling their lineup in the hopes of bringing them success.

Bruno and Micah Christenson swapped clubs at the setter position. They sent Taylor Sander to Sada Cruzeiro in Brazil and signed Yoandry Leal in return. The core in the middle is staying mostly the same, until Tsvetan Sokolov gets healthy. The summer transfer saga swirling around Robertlandy Simon landed them a replacement for Sokolov at opposite, and a strong player in the middle. Recall that Simon was still under contract with Sada Cruzeiro but decided to leave. They also signed Fabio Balaso, as they lost Grebennikov.

Last season was full of turmoil for Modena. Earvin N’Gapeth and Bruno left, seemingly upset with their coach, Radostin Stoytchev. The coach ended up being released and ended up in Poland with Stocznia Szczecin. Modena’s Vice President also resigned, leaving a scathing assessment of the club on her way out. Italy’s most storied club hired Julio Velasco from Argentina to right the ship.

Modena had apparently been looking at bringing in Micah Christenson even before Bruno has announced his departure. They also picked up Ivan Zaytsev to start at opposite. They also signed a pair of outside hitters, Tine Urnaut and Bartosz Bednorz, to try and replace the dynamic N’Gapeth. Simone Anzani also arrived to start opposite of Max Holt in the middle. It will be interesting to see if Christenson and Holt will feature for Modena so soon after the conclusion of the World Championships.