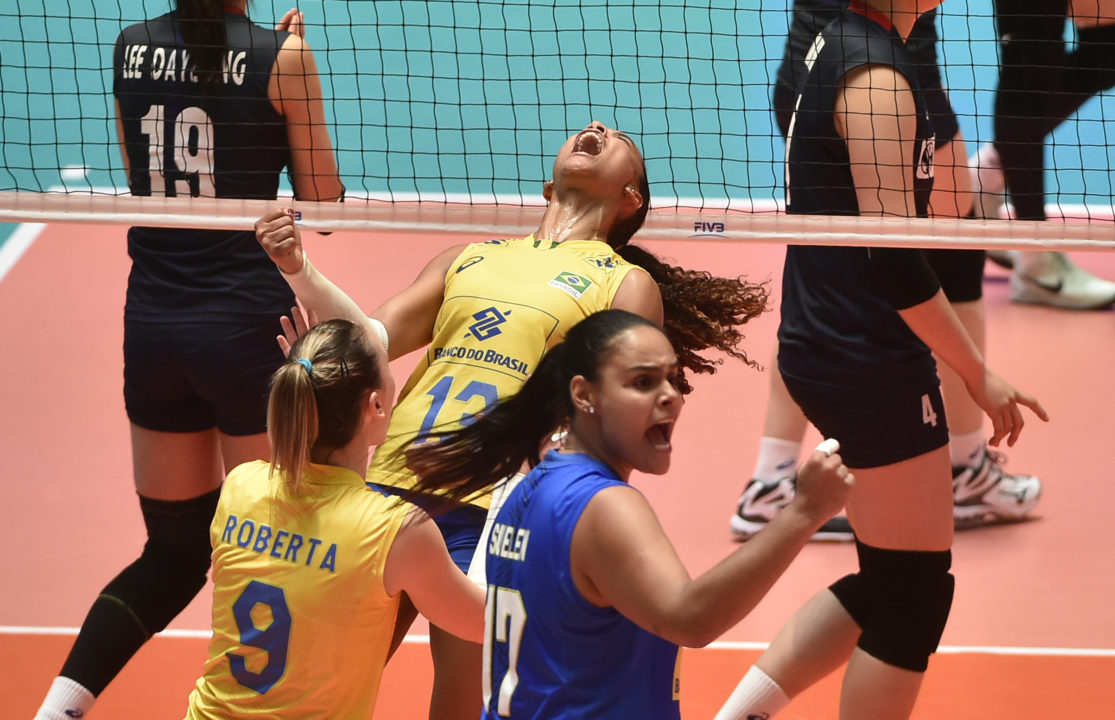 Tandara Caixeta racked up 33 points to lead Brazil in an all-around effort in the team's four-set win over South Korea. Meanwhile, Poland was held under 10 blocks for the first time in VNL play in a 3-0 loss to the Netherlands. Current Photo via FIVB

Tandara Caixeta racked up 33 points to lead Brazil in an all-around effort in the team’s four-set win over South Korea.

After trailing 3-0 early, Korea surged ahead 12-8 in Set 3. Brazil surged behind Caixeta and earned a 20-19 advantage of its own. The see-saw battle continued with Korea going up 22-20. Korea saved five Brazilian match-point tries before stealing away the 33-31 win to extend the match.

The Koreans carried the momentum to a 7-4 lead in Set 4. Brazil called timeout and came back to tie it up at 10 all on a Costa block. Beatriz Correa put Brazil in front 16-15  and another blow by Caixeta gave the team a 20-17 lead en route to a 25-20 win and the match.

Poland had managed double-digit blocking tallies in its previous six VNL matches, but managed just four in a 3-0 loss to the Netherlands on Tuesday.

The Polish side also gave away 21 points on errors (to 16 by the Dutch), but edged the Netherlands in kills (46-45) and aces (4-3) in the loss, which gave the country its first three-match losing streak since the 2014 World Grand Prix.

The VNL’s top scorer Malwina Smarzek continued to carry the load for Poland with a team-best 15 points (13 kills, 2 blocks), while Agnieszka Kakolewska and Martyna Grajber chipped in 10 points apiece. Kakolewska notched seven kills, two blocks and an ace, while Grajber added eight kills and two of the team’s four aces.

The Dutch boasted a 16-10 lead in Set 1 only to see it evaporate down to one (23-22) as Smarzek and Kakolewska led the rally. In the end, the Netherlands offense prevailed in a 25-22 win.

Set 3 looked to be well in hand for the Dutch, leading 16-9 at the second technical timeout, but Poland chipped away, eventually tying the score at 23. The Polish team thwarted two Netherlands match-point tries, but couldn’t force a fourth set, falling 27-25.