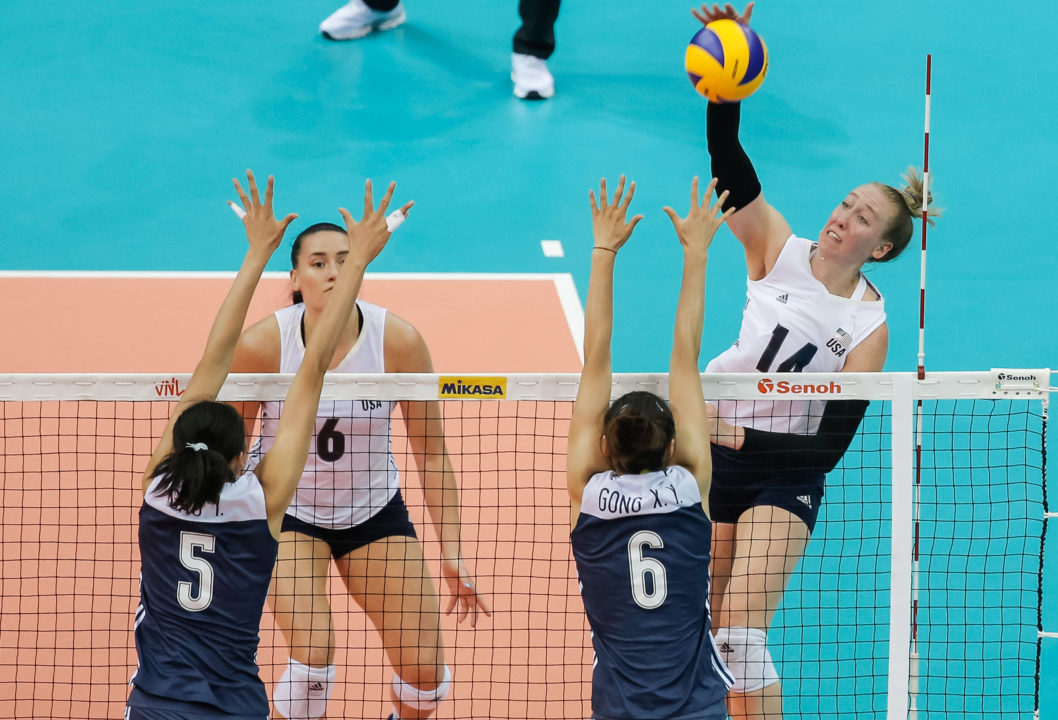 It's become clear that the American's path to gold is the right arm of Michelle Bartsch-Hackley (#14). Archive Photo via FIVB

The inaugural edition of the FIVB Women’s Volleyball Nations League in 2018 is two weeks longer than it’s predecessor tournament the World Grand Prix, but like a blur, the 7-week-long tournament is on to its final classification matches on Sunday in Nanjing, China.

There, Turkey will face the United States for gold, while China will face Brazil for a bronze medal.

The brilliance of the new FIVB format is that, unlike in the previous tournament, every team has played every other team, so we have data points for the results.

And here’s the juice: at one point in this tournament, the United States ran off a record 10-straight wins, including 9 in 3-0 sweeps. The loss that prompted that run? A 3-2 defeat, at home in Lincoln, Nebraska, against Turkey.

There are two key differences between the most current edition of the American team and the one that lost to Turkey in that match. One is the shift of Kelsey Robinson from outside hitter to starting libero, with libero being a main point of struggle for the Americans in that previous loss. Robinson hasn’t been perfect in defense for Team USA, but she has been an upgrade in consistency.

The other is the acceptance of Michelle Bartsch-Hackley as the crucial piece of the American offense, even if that means at the expense of established American superstars like Kim Hill and Jordan Larson.

When the teams had their first rematch earlier this weekend in the Final 6 round of play, the Americans were dominated in the first two sets by Turkey, but then put Bartsch-Hackley in for Hill and suddenly the entire match turned. In just over 3 sets of that 5-set match, Bartsch-Hackley led the Americans in kills (18), swings (41), and scoring (20). By the semi-final win over China, American coach Karch Kiraly had no choice but to start her and lean on her, and she delivered: she had more than twice as many swings as any other American (55), and was the team’s top scorer by a 10-point margin (24 points).

This has been the story of the American tournament. Overall, they’ve been the dominant team of the summer, but there’s almost been an ongoing challenge between the pre-summer expectation, and what is showing on the court. With confidence now, the Americans know what their lineup must be for success against Turkey, and will have the opportunity to run it from the start, without waiting for another mid-match revamp to their lineup to fight back.

For Turkey, the key is finding the hot hand on Sunday. The team’s strength this summer, which has seen them through to the best breakout story of the tournament, has been their surprising depth and balance. In their early-tournament win over the Americans, Turkey had 5 players score in double-digits. In their Final 6 loss to the Americans, that number was just 3, with Meliha Ismailoglu leading the team in scoring on 18 points and 16/28 hitting (57%), but not in attempts.

That honor earlier this week went to Meryem Boz, who had just 13 points on 11/34 hitting (32%). She would eventually find a seat on the bench to start the tie-breaking 5th set, though she’d make an appearance later in an eventual loss. In the teams’ first game, Boz had 18 points, but it took her 52 swings to get there (31%). Turkey has counted on their veteran opposite for years, and she led the team in hitting percentage overall in the early stages of the tournament, but it seems that the Americans have tee’ed her up defensively. That leaves opportunities for the 23-year old Ismailoglu at the outside, and that should be an opportunity for Turkey to exploit.

The poetic justice of this gold medal final is that a tournament that has been dominated by storylines of youth and roster turnover and coaches testing for players who want to be a part of their countries’ Olympic runs will come down to the two veteran teams of the tournament, the United States and Turkey.

The bronze medal match, meanwhile, will also be a 3rd game, though in this case, Brazil has had the edge on both occasions. In the preliminary stages, Brazil beat China 3-2, fighting off 34 points from Zhu Ting to win in a tie-breaker. In the Final 6 stage, Brazil held Zhu at bay and dominated for a 3-0 sweep.

The question for China will be whether or not head coach Lang Ping is ready to take the training wheels off of teenage opposite Li Yingying, who has been the individual revelation of the tournament. She led China in scoring in week 1, her senior national team debut for China, but has been handled delicately throughout the rest of the tournament.

She didn’t start in the semi-final against the United States, but was inserted in the 3rd set of the match. She played the remained, helping China win their first set of the tussle, and wound up with 14 points in just a set-and-a-half.

Brazil didn’t see much of Li in their first two matchups. So that will be the biggest ‘if’ of the bronze medal match. If Li starts and plays the majority of the match, we like China to win 3-2. If not, we predict a 3-1 Brazilian victory. At the end of the tournament, even with the World Championships coming up, Chinese fans will be hungry for hardware. I foresee Pang pulling the gloves off and going full-bore, meaning the former is the prediction. But, I reserve the right to be wrong if Li doesn’t see much court action.