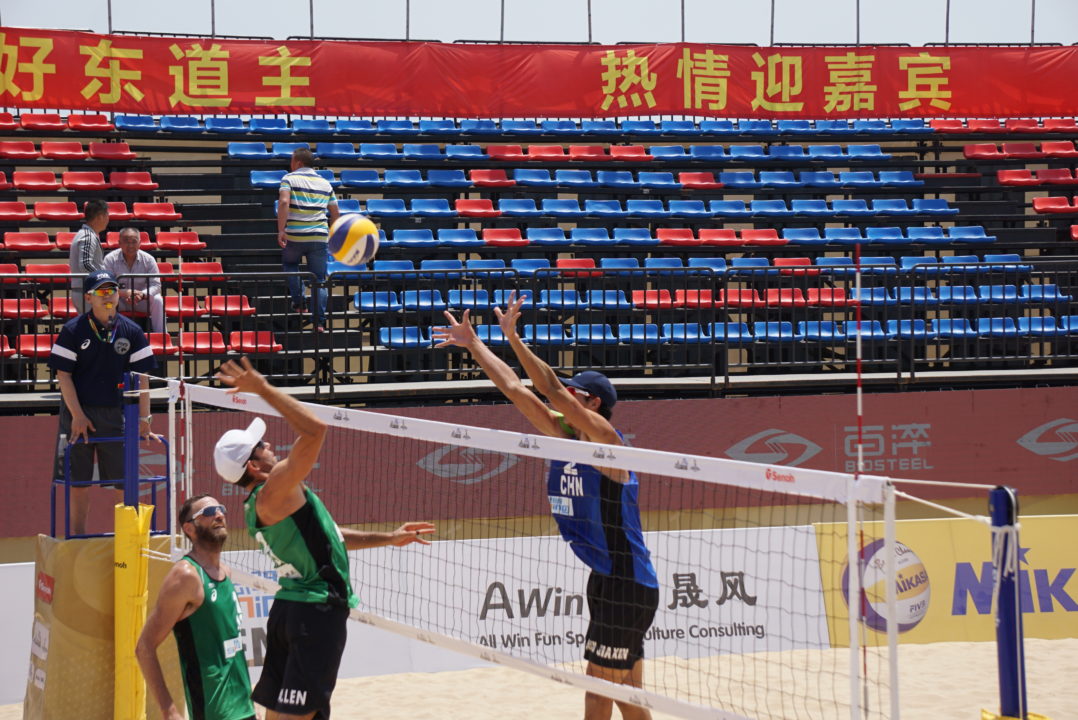 The biggest surprise of the day came as No. 30 seed Adrian Heidrich and Mirco Gerson of Switzerland knocked off third-seeded Austrians Alexander Horst/Clemens Doppler in three sets in Pool C. The qualifiers won the opening set 21-19 and rebounded from a 21-15 set 2 loss for the 15-13 victory.

Americans Ryan Doherty/William Allen, who were tabbed as the No. 25 seed after making it through qualifying, bested homestanding No. 8 seed Likejiang Ha/Jiaxin Wu in three sets, winning 21-16, 17-15 after dropping the opener 21-19.

Norway’s Anders Berntsen Mol/Christian Sandlie Sorum, the No. 23 seed after qualifying, topped No. 10 seed Alison Cerutti/Bruno Schmidt of Brazil in straight sets (21-16, 21-17) to round out the upsets.

““We thought, we knew this would be a lot of fun because we know they are the Olympic champions, they are the world champion, you name it, they are everything, so we were just really relaxed, we knew it was going to be a fun game and we’re just going to do our best to win or take a set,” said Mol. “Because we are underdogs and it’s easier for us to play than it is for them I guess because everyone wants to beat them and we really wanted to beat them today. We feel great, it was such a great game by us, we gave so much and our tactic was really good. There was a lot of screaming, a lot of emotions on the court, so it was great to shout out the winning final scream.”

Fourth-seeded Brazilians Vitor Felipe and Guto Carvalhaes, fifth-seeded Latvians Aleksandrs Samoilovs/Janis Smedins and sixth-seeded Latvians Martins Plavins/Edgars Tocs all avoided the upset, but it took tiebreak efforts to do so. Plavins/Tocs lost Set 1, while the others hung on for victories after dropping set 2.

No. 11 seed Pablo Herrera/Adrian Gavira of Spain also won in a three-set affair.

Japan’s Azusa Fatumi/Akiko Hasegawa notched the lone upset as the No. 25 seed defeated No. 8 Fan Wang/Xinyi Xia of China. The Japanese pair rallied after dropping the opening set to win 21-17 and 29-27. Czech duo Kristyna Kolocova/Michala Kvapilova also won in tiebreak, hanging on for the victory over Russia’s Nadezda Makroguzova/Svetlana Kholomina.