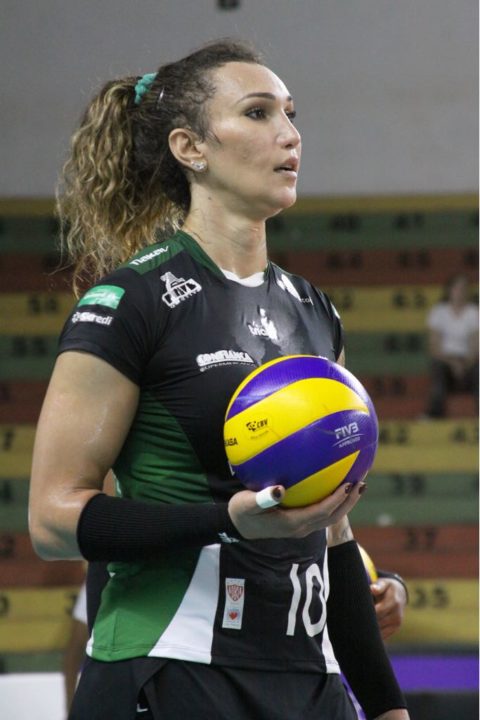 Tifanny Abreu made volleyball history when she became the first trans female to play in Brazil's Superliga. Current Photo via Neide Carlos/Vôlei Bauru

Tifanny Abreu made volleyball history when she became the first trans female to play in Brazil’s Superliga. Since then, she broke the competition’s single game scoring record, and has dominated the league’s offensive statistics. Such performances has drawn the ire of many teams, players, and fans, who have asked the Brazilian Volleyball Federation (CBV) to find a “solution” to the situation. Although CBV has not yet taken any action on the matter, as it will probably wait for FIVB’s future decisions, clubs have taken action by agreeing to tag Tifanny with a maximum score in Superliga’s parity system for next season, one of only two players who are not Olympic gold medalists, but yet were singled out with the distinction. She has recently extended her contract with Bauru for next season.

Most volleyball fans were sure that Tifanny’s name would be called up by José Roberto Guimarães this week, as the coach announced his first 10-player roster for the spring season. Her absence was questioned, and according to Globo.com, Guimarães followed direct orders from the FIVB to await the institution’s final decision on the player’s eligibility. Here are the complete notes published by the Brazilian Volleyball Federation (CBV) and the FIVB:

“The Brazilian Volleyball Confederation was informed by the International Volleyball Federation, in a letter sent to all national federations, of the creation of a study group to study and define the eligibility criteria of athletes in international competitions.

Accordingly, while respecting the FIVB’s guideline to await the study’s completion, which will define new eligibility rules, CBV did not consider calling up opposite hitter Tifanny Abreu. CBV understands that FIVB’s position on this matter is based on solid foundations, that promote the inclusion without compromising the technical balance between teams in volleyball.”

“The FIVB understands perfectly that the eligibility of transgender athletes to participate in international competitions is an extremely delicate subject that requires careful examination as to ensure competitive parity among all athletes. We are aware that there have been investigations seeking clarification on the future status of transgender athletes with the potential to integrate national teams.

Therefore, the FIVB established a study group specifically in charge of researching and consulting the IOC, other sports bodies, and leading experts in medical ethics. This ensures that FIVB’s final recommendations on the eligibility of athletes for FIVB competitions are based on comprehensive due diligence, ensure inclusiveness and avoiding inequality.

Our ultimate goal is to create clear and objective guidelines and, until the recommendations of the study group are made and approved by the FIVB Board of Directors, there will be no further comments.”

The said study group came much before it was anticipated, as the FIVB’s medical comission had stated that such efforts would only be undertaken during the FIVB World Championship Congress.