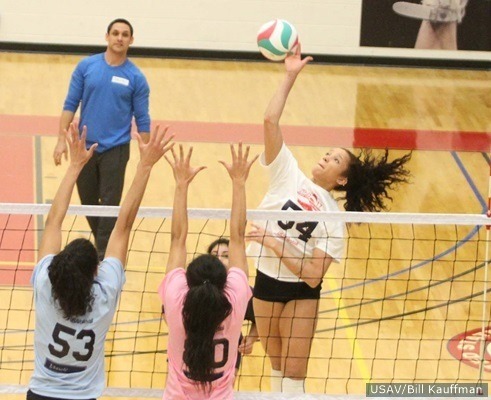 The 12-member roster, including four players from the University of Texas, will train and compete in Bangkok from May 19-30.  Current Photo via Bill Kauffman, USA Volleyball

The 12-member roster will train and compete in Bangkok from May 19-30. The match schedule will include contests against the Thailand National Team, the Thailand U23 Team and Bangkok Glass, the top team in the Thai professional league. The squad will also play against two other teams yet to be confirmed.

The team will be training and competing at the FIVB Development Center in Bangkok.

Eight of the 12 players have USA Collegiate National Team program experience. Three were on last year’s CNT-China Tour Roster, while four others were on the CNT-Europe squad. Two were members of the CNT-Indianapolis training program last summer.

The University of Texas will be the most represented institution on the team, boasting four members as well as head coach Jerritt Elliott, who will lead the CNT-Thailand squad. The University of Kentucky is the only other college with multiple team members, claiming two spots on the Thailand Tour team.

Five members of the team were AVCA All-Americans in 2016. White was a first team selection, while Lily Johnson, Hughes, Thompson and Rigdon garnered honorable mention acclaim.