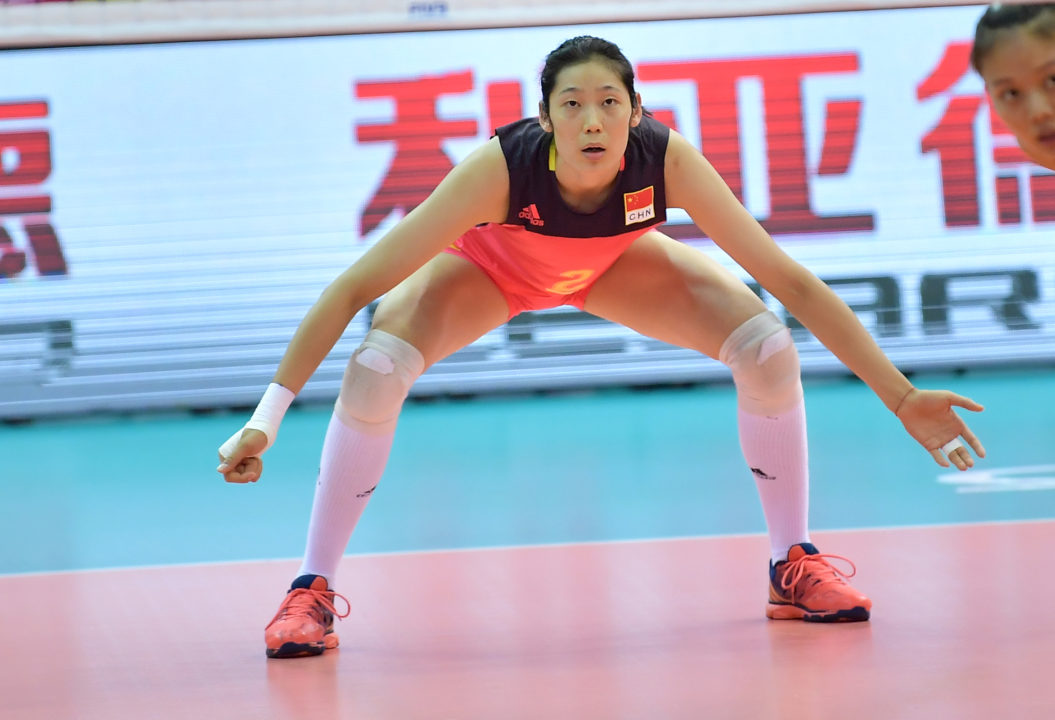 Zhu Ting returns as China plays host to a reinforced Italy along with Japan and Argentina in Pool 12 of the Women's Volleyball Nations League. Archive Photo via FIVB

Pool 12 features the top team in the world in China along with two near top five teams and a struggling Argentina bunch. The world rankings favor the top three more than they’ve showed in this tournament through six matches though, with China’s 3-3 record the best among all four teams. In total, the group combines for just a 7-17 record. That means the competition should be close and it also means there is a huge opportunity for one team to turn things around by feasting on the others and emerge back in the playoff race – although China is more so getting a test run in pool play since they know they get to host the elimination round and will be a part of it regardless. Beyond the action, this pool features the return of two stars for China and Italy.

As mentioned earlier, the standings aren’t pretty for the four teams in this pool. China tops them all at just 3-3 with 10 points – meanwhile Italy, Japan and Argentina have a combined 13. It makes a bit of sense for the Chinese side though, as they still have enough to remain competitive and draw wins here or there, but aren’t at full force since they can use this for preparation for the elimination round that they are hosting and a part of. They will be closer to that full unit this week, with superstar Zhu Ting back in action, but the extent of how much remains to be seen (more on that later).

Below China is Italy and Japan, who both sit at 2-4. The Italians still have hope because they have the most points for a two-win team and return their own star player in Paola Egonu, while Japan is further down via tiebreaker. Both are still alive, but chasing a host of four and five win teams. That means they each have to have at least a 2-1 week in Pool 12, with a 3-0 week producing a much better result. Essentially if Italy or Japan were to earn a 1-2 week they’d be sitting at 3-6 and in a spot where they would probably have to win out.

Finally, at the bottom of the standings is Argentina, who is just 2-18 in sets played. They are the only nation in the event without a win, but will look to do so as the race to avoid relegation is on.

Not only is China the highest rated team in the pool according to the FIVB World Rankings and the team with the best overall record, but they also have a huge boost with one of, if not the, best players in the world in Zhu Ting returning. We got to see some of the youth and other pieces of China early, and the first six matches without Zhu should add experience and make the rest of the team more well-rounded. Now with Zhu added to the fold and playing at home in a building that holds over 12,000, China will be the favorite in Pool 12.

Of course, Italy and Japan should make things interesting, especially considering they will be playing with desperation knowing that they need a big week to offset a lackluster opening six matches. Even if China were to go 3-0 though, a 2-1 week for either of these teams would be a nice week. That will make the match between Italy and Japan critical for staying near the playoff race. In terms of proximity to home, that would favor Japan, but Italy has been slightly better in the event and gets back Paola Egonu along with a few other reinforcements. That would favor Italy to finish second in the pool, if not first if they can upend China.

We will see what Argentina can provide to the pool. There aren’t many expectations, and it seems likely that they will walk out of the week at 0-9 overall. If they can upend Italy or Japan though, not only would it be key to working up to the other bottom-end teams, but it would also throw a wrench into those plans of Italy or Japan getting back into the top half.

Regarding Zhu Ting, Zhu is her surname, not Ting.