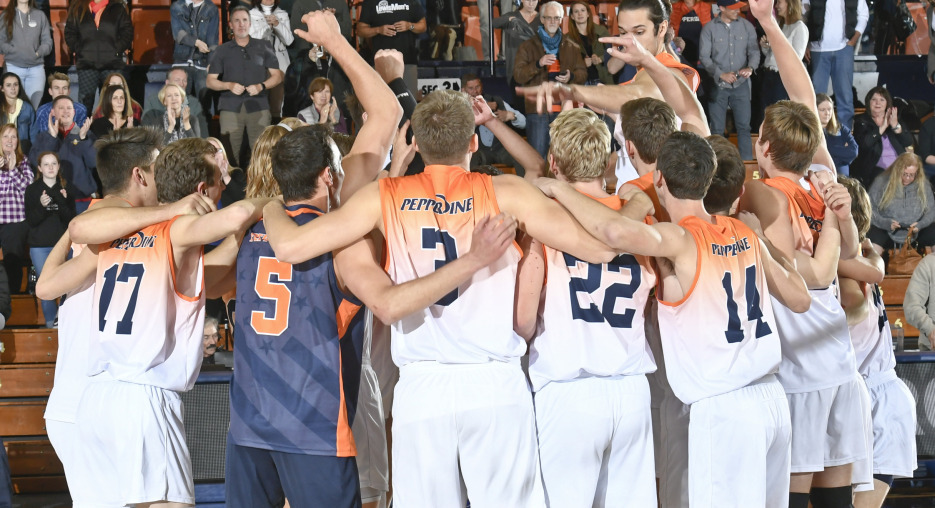 Pepperdine used 13.5 blocks to stifle the Concordia offense and won the rest of the stat sheet as well in the sweep Thursday night. Current Photo via Pepperdine Athletics

Harthaller downed three straight kills as Pepperdine went up 8-2 in Set 1, but Concordia bounced back with six of the next eight points, including two aces. Mullahey turned in two blocks and an ace as the Waves put together a 7-1 run and grabbed a 17-9 advantage. The Golden Eagles slowed Pepperdine with back-to-back points, but couldn’t stop the Waves from rolling ahead 21-11 behind a kill and two aces by Wieczorek. A pair of Kaleb Denmark putaways capped the 25-15 Wave victory. Pepperdine outhit Concordia Irvine .455 to .111 in the stanza.

Pepperdine carried the momentum into Set 3, jumping ahead 8-4 as Wieczorek served up two aces. Jonathan Carlson answered with two aces of his own as part of a 4-0 Concordia run, which tied it up at 8-all. The Eagles grabbed the lead at 12-11, their first since the opening point of Set 2, on a Barsemian ace. Wieczorek added two more aces and a kill to lift the Waves to a 15-12 edge. Concordia would not go away, however, knotting the score again at 16 after back to back stuffs by Chandler Gibb, Hunter Howell and Carlson. The knot-up prompted a 6-2 Pepperdine run, including two Wieczorek kills and a pair of blocks by Wexter and Harthaller. The Eagles took a timeout and pulled within one at 22-21 as Barsemian added a kill and a block. Harthaller and Harriman countered with kills of their own to set up match point at 24-21. Barsemian kept the Eagles alive with a kill and an ace, but committed a hitting error to end the match.