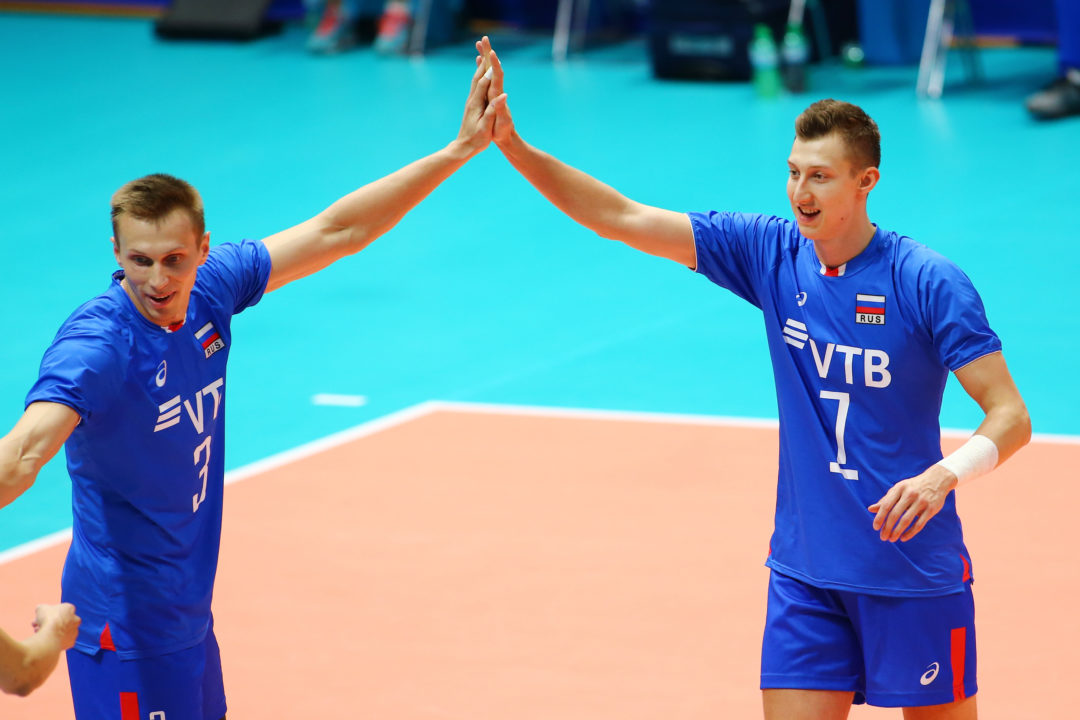 With its ticket to France for the Final Six already in hand, the United States decided to rest most of its starting lineup, opting to give a young roster of a players a shot and fell to Russia 3-0 in a close match. Current Photo via FIVB

With its ticket to France for the Final Six already in hand, the United States decided to rest most of its starting lineup, opting to give a young roster of a players a shot, alongside 2016 Olympian Max Holt, and fell to Russia 3-0 in a close match.

Taking the court for the Americans were Kyle Ensing, Jake Langlois, TJ DeFalco, Jeff Jendryk and Kawika Shoji in addition to Holt. Dustin Watten also gave Erik Shoji a break, taking over the libero role for the day.

Brenden Sander, who was new to the U.S. roster for Week 5, made his senior national team debut as a substitute in Set 2 and later replaced an injured Langlois at 21-19 in Set 3.

Russia sat star  Dmitry Muserskiy and recent standout Romanas Shkulyavichus, but was clearing aiming for the victory, leaving the remainder of its lineup in tact. Dmitry Volkov paced the team with 16 points (12 kills, 4 aces), while Victor Polataev (12), Igor Philippov (11) and Egor Kliuka (10) followed with double-digit efforts. Polataev and Kliuka turned in 10 kills apiece, while Philippov starred at the service line with six aces to go with three kills and a team-best two blocks.

Ensing paced the Americans with 15 points (12 kills, 2 aces, 1 block), while the rest of the lineup, save Watten scored at least on one point. Langlois managed 10 points (9 kills, 1 ace) before exiting the game. DeFalco (8), Holt (7) and Jendryk (5) followed. Shoji managed one kill from the setter position, while Holt put up a team-best two blocks.

Set 1 was close throughout. Russia boasted a two-point edge at 18-16 and the USA rallied to tie it up at 22 before a point was taken away on challenge for a net touch. Russia won the challenge and the point to go up 23-21 and give the team a lead it would not relinquish.

Russia grabbed an 8-4 lead in Set 2 and held on the rest of the way with help from tough serving including nine aces.

Down 10-7 in Set 3, Shoji rallied the troops to a 14-12 advantage. Russia countered to go up 16-15. The see-saw battle continued as the USA was back on top at 21-18. Langlois went down after a blocking attempt at 21-19. The Americans scored the next point on an Ensing kill, but Volkov took over from there with a kill and an ace leading to match point at 24-22. A missed serve gave the United States hope, but Kliuka closed the door with a kill.