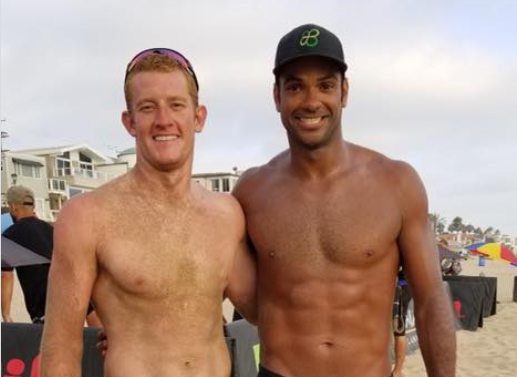 Sixty-four men's teams and 36 women's faced off in Thursday's qualifying bracket trying to earn a spot in the AVP Chicago main draw. At the end of the day, Sarah Sponcil/Terese Cannon moved on in their first tournament together and Bruno Amorim/Skylar del Sol were the lone men's team to make it through in straight sets.  Current Photo via Bruno Amorim

Sixty-four men’s teams and 36 women’s faced off in Thursday’s qualifying bracket trying to earn a spot in the AVP Chicago main draw.

Making it through on the men’s side were:

Berenek/Fiers played their toughest match to open the day, coming back against Garrett Bucklin/Frank Field for a 22-24, 21-9, 15-13 victory, before winning two via sweep.

In women’s qualifying, it was

Meister/Strakova had to play just one match to make the main draw after their intended first round opponent forfeited. It did take a tiebreak win, however, to stamp their ticket to Friday. The pair rallied past Lauren Dickson/Claire Wolfe 19-21, 21-15, 15-10.

House/Turner also benefitted from a first round forfeit. The duo then swept past Tanna Aljoe/Brittany Fennell 21-16, 21-19 to move on.

Sponcil/Cannon, who are playing their first tournament together in 2018 after Sponcil played on both the AVP and FIVB stages with partner Lauren Fendrick, blazed through the opposition, never allowing more than 12 points in a set. The duo won 21-8, 21-15 against Jessica Gaffney/Katie Pyles and Chelsea Ross/Bethanie Thomas 21-12, 21-10.