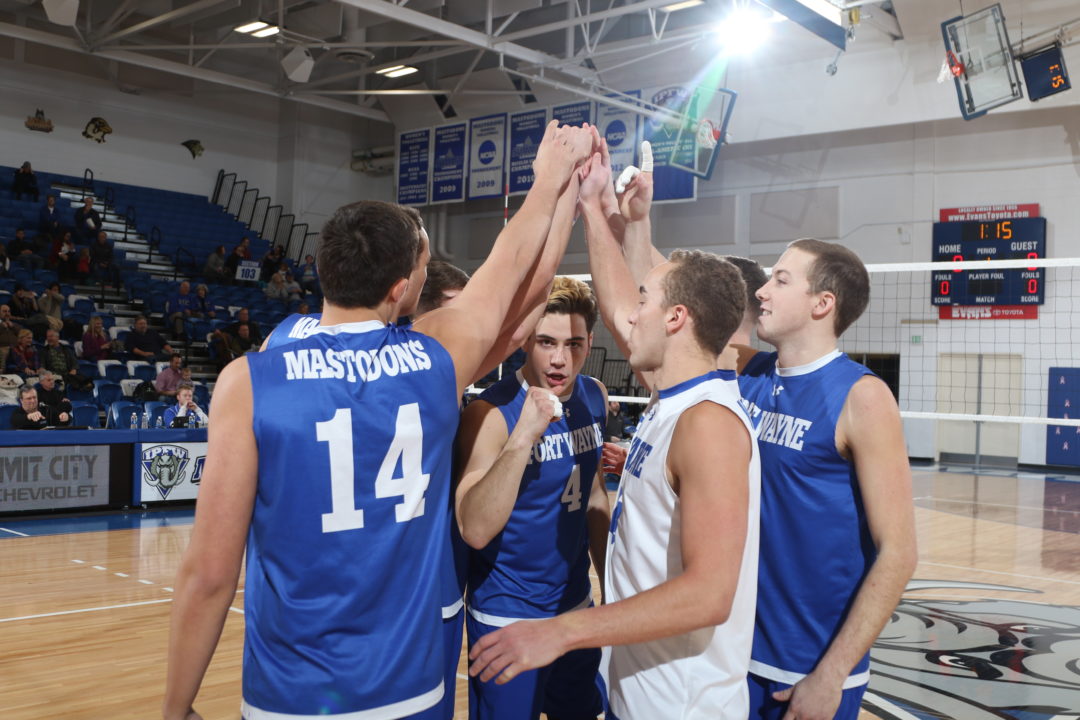 No. 17 Fort Wayne pulled the upset of the night on Wednesday, edging past No. 3 UC Irvine on the... Current Photo via Fort Wayne Athletics

No. 17 Fort Wayne pulled the upset of the night on Wednesday, edging past No. 3 UC Irvine on the road, despite being outdone in hitting percentage and blocks. UCLA and UC San Diego also pulled off slight upsets at home. No. 1 Long Beach State won in a landslide, but the victory was historic, pushing the 49ers to a program-best 17-0 start. Ball State won its sixth-straight match with a four-set road win over Concordia Irvine.

Senior outside Aaron Koubi paced the Anteaters with 14 kills, nine blocks and five digs, while freshman outside Joel Schneidmiller (12), junior opposite Karl Apfelbach (10) and sophomore middle Scott Stadick (9) rounded out the offense. Stadick hit at a .412 clip and added seven stuffs, while Schneidmiller added four blocks and the team’s lone ace. Redshirt freshman outside Austin Wilmot chipped in five kills and a match-high 12 blocks.

It Was Over When: Trailing 4-3 in Set 5, Fort Wayne turned it around with a 4-0 run, including two Gago kills and two Stone aces, to go ahead 7-4. The Mastodons led by two or more the rest of the way. After a pair of hitting errors narrowed the gap to two at 11-9, Fort Wayne closed out the upset with a 4-0 run, including two UCI miscues and a kill and a block by Stone.

Key Stats: Ball State won its sixth straight match behind an 11 block effort, which helped limit Concordia to a .156 hitting effort. The Cardinals also won the rest of the statistical categories: kills (57-47), hitting efficiency (.276 to .156) and aces (3-2).

Stat Leaders: Sophomore outside Matt Szews (14), senior middle Matt Walsh (13) and senior outside Mitch Weiler (10) turned in double-digit kill efforts to guide the Cardinal offense. Szews rounded out a double-double with 12 digs and four blocks, while Walsh hit at a team-best .524 clip and chipped in a match-high eight blocks and two aces.

Senior outside Jonathan Predney led the Eagles with a 16-kill, 11-dig double double, while redshirt sophomore outside Raymond Barsemian notched 13 kills and three digs, but it was not enough. Redshirt junior setter Chandler Gibb added a 35-assist, 10-dig double double, but led his hitters to just a .156 effort in the loss.

It Was Over When: The teams tied eight times and neither gained more than a two-point edge in the first half of Set 4. Up 13-12, Ball State pulled away with a 7-1 run, including two kills, a block and an ace by Walsh and a kill and a block by Ben Chinnici. Concordia Irvine answered with seven of the next 10 points to narrow the gap to three at 23-20. Three Cardinal miscues coupled with a kill and a block by Parker Maki aided the rally. A service error and Weiler putaway put the final stamp on the BSU victory.

Key Stats: UCLA’s efficient offense was too much for Pepperdine in a four-set win on Wednesday. The Bruins hit at a .412 clip and registered 10 more kills (53-43), while holding the Waves to a .253 effort with help from a 7.5 to 4 lead in blocks. Pepperdine won the serve 5-3 in aces. The Bruins hit .429 or better in three of the four sets, and committed just three hitting errors in the final two sets combined.

Stat Leaders: Sophomore middle Daenan Gyimah, the nation’s most efficient hitter, was key in the victory, notching a career-high 17 kills at an eye-popping .889 clip (17-1-18), while also posting a team-leading five blocks. Senior opposite Christian Hessenauer and senior outside Jake Arnitz added 13 kills apiece. Gyimah and Hessenauer each served up an ace.

It Was Over When: The Bruins worked their way to a 15-7 lead in Set 4 with help from five blocks, four by Gyimah. The sophomore also notched two kills in the first half of the set. The Waves would get no closer than five the rest of the way. Down 20-12, Pepperdine scored three in a row, two on Clay Carr putaways to make it 20-15 and force a UCLA timeout. The Bruins scored five of the next seven to wrap up the win. Two Gyimah kills and two Wave service errors aided the final rally.

Key Stats: UC San Diego hit .342 and put up 10 blocks to hand USC its seventh straight loss, while snapping a three-match skid for the Tritons. UCSD hit nearly .600 in the first two sets and despite a dropoff in Set 3, managed the .342 effort for the match and a 54-40 lead in kills. The 10-5 lead in blocks helped the Tritons hold the Trojans to a .183 effort. USC edged UCSD 6-5 in aces.

Stat Leaders: Senior opposite Tanner Syftestad pounded down 18 kills at a .395 clip, while three other players turned in eight or more putaways for UCSD. Freshman outside Wyatt Harrison chipped in 12 kills, while senior middle Alec Flowers (9) and redshirt sophomore outside Xander Jimenez (8) followed. Flowers hit at an errorless .818 clip (9-0-11) and put up a team-high seven blocks, while Jimenez notched six stuffs.

Redshirt junior outside Jack Wyett (11) and junior outside Ryan Moss (10) led the Trojan offense. Moss hit at a team-high .476 clip with no errors in 21 swings, while Wyett was one of three USC players with two blocks to his credit. Freshman middle Sam Lewis added five kills, two blocks and a team-high two aces.

It Was Over When: USC led 14-12 midway through Set 4, but UC San Diego dominated the rest of the stanza, outscoring the Trojans 13-5. Harrison downed three kills and Connor Walbrecht added a kill, a block and ace as the Tritons pulled ahead by five at 22-17. A kill and a block by Harrison capped the 25-19 victory.

It Was Over When: A 5-0 run, including two DeFalco kills and two UMO miscues pushed the 49ers out to a 12-6 lead, one which they would not relinquish. The Trojans were within three at 13-10, but it was nearly all LBSU after that. Long Beach State closed out the win on a 12-4 run, including three Poole putaways, and capped by back-to-back aces by Siegfried.