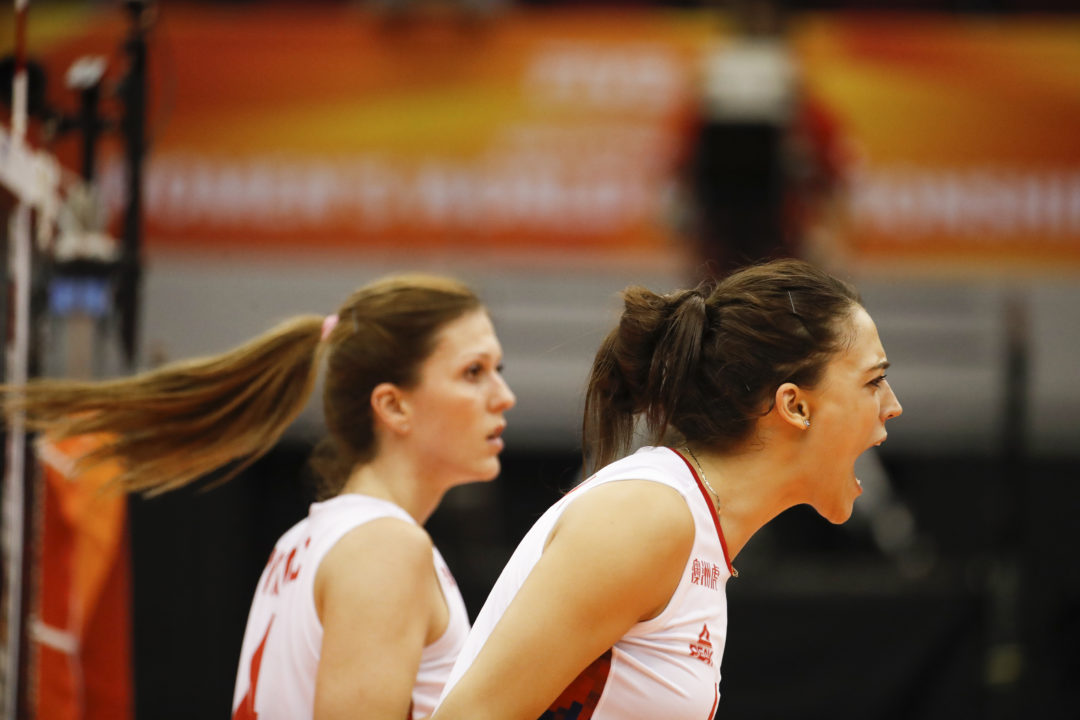 Pool E, which in this author’s opinion is the softer of the two pools features a diverse field with 3 European squads (Serbia, Netherlands, Germany); one from Asia (the hosts Japan); one from South America (Brazil); and 3 NORCECA countries (of the 4 to have advanced – Dominican Republic, Puerto Rico, Mexico).

The obvious headliner matchup here is Serbia vs. the Netherlands: two teams that went virtually unchallenged in their preliminary rounds. In spite of an injury to Bojana Milenkovic in their last match of round 1, the Serbians enter the 2nd round in great shape with Brankica Mihajlovic firing on all cylinders after a knee injury.

They really asserted their dominance in a 3-0 sweep to Brazil, where the Brazilians only scored 21, 18, and 19 points, respectively, in the 3 sets. nobody on Brazil’s team scored more than 9 points in that match, and Serbia hit a whopping 60% against one of the best teams in the world. The Dutch were less-tested, but were unblemished other than a set lost to Germany (and another that went 32-30) and a 5-set battle with the hosts Japan.

The return of Sarina Koga for Japan has given them a huge boost. She’s 2nd on the team in scoring and leads them in hitting percentage at the tournament after a disappointing showing at the Nations League and not being included on the Asian Games roster (where Japan again struggled). Her rise has coincided with that of Japan, though in their biggest match, against the Netherlands, she had 23 points, but it took her 63 shots to get there (36.5%).

Sleepers: Germany – If there is one team in this pool that’s going to rise up and steal a spot in the Final 6, it could be Germany. By now, 24-year old opposite Louisa Lippmann is no secret, but the resurgence of captain Maren Fromm at opposite (she hasn’t been relied on much, but is hitting 46%) at outside hitter.

Serbia is the class of this pool. Hard to see them losing a match until they get to the Final 6. After Brazil’s struggle against Serbia, they’ll be struggling with confidence, while the Netherlands and Japan (surging behind a home crowd) have momentum.

After two-straight finishes on the podium, this looks like it might be the year that Brazil’s run ends. I’m seeing a 4th-place finish and out of the final for them.