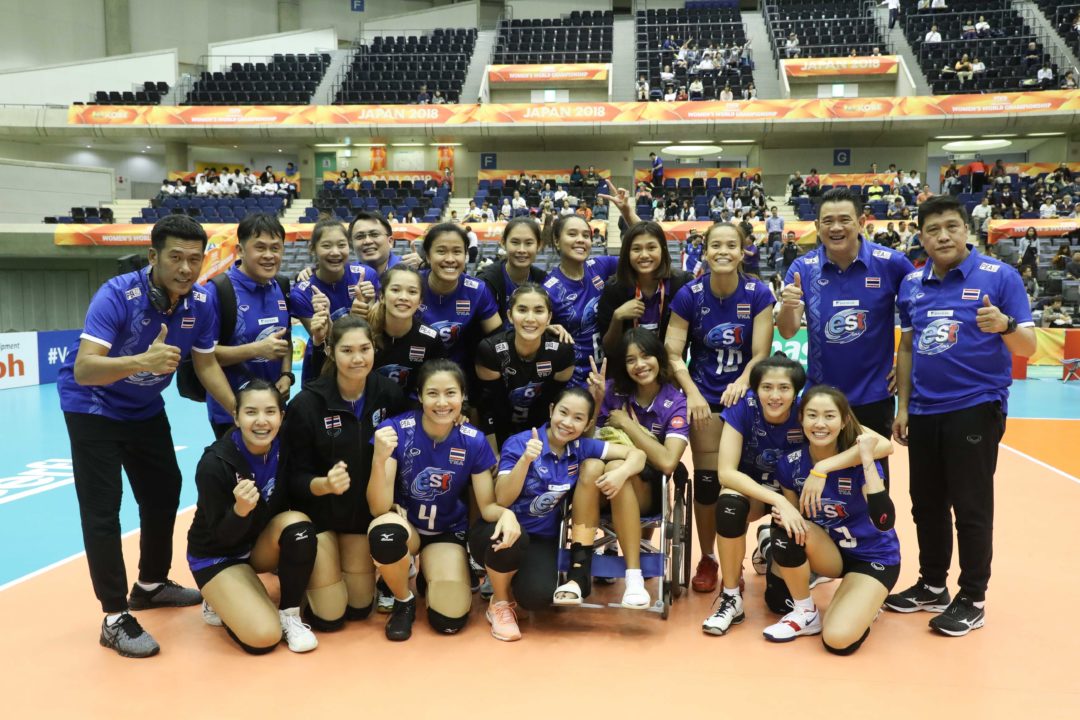 The Thai team finished the 1st round of the 2018 Women's Volleyball World Championships with a number of significant injuries. Archive Photo via FIVB

The Thailand Women’s Volleyball National Team is limping into the 2nd round of the 2018 Women’s Volleyball World Championships having met their goal of a top-16 finish, but perhaps short of their potential as the tournament’s major Cinderella story.

Instead, injuries have derailed their efforts. In their final match of the round, a 3-1 win over Azerbaijan that wound up being a battle for 3rd place in the pool, they were without Ajcharaporn Kongyot (ankle) and Kokram Pimichaya (knee), and Chatchu-on Moksri continued to be used sparingly after leaving the Asian Games with an ankle injury as the team’s leading scorer. When healthy, those three are probably 3 of the team’s top 4 offensive options.

In their absence, that role has fallen to 34-year old middle blocker Pleumit Thinkaow, who leads the team in scoring in the tournament out of the middle (64 points in 5 matches); and Onuma Sittirak at hitter (she had 23 in the win over Azerbaijan, though only 27 in the team’s other 4 matches combined).

Thailand enters the 2nd round of play in 5th place, and they need to climb to 3rd (ahead of two teams among Italy, the USA, China, and Russia) to advance. They’ll play China, Italy, Bulgaria, and Turkey on October 7th, 8th, 10th, and 11th, respectively, in Pool F.

There has been little information about the availability of any of the 3, though the federation has downplayed the severity of the injuries of any of them. Before the tournament, the 18-year old Moksri was said to be at “90%” and available to play if needed – though she still only served as a service specialist even after all of the injuries. Pimichaya and Kongyot weren’t even listed as being available for Thailand’s match on Thusrsday. 2 days off should give the time to heal, though Kongyot was still in a wheelchair in Thursday’s match.

Federation official stated that their goal before the tournament was to finish in the top 16. Doing so qualified them for the 2019 Olympic Qualifying Tournament (though there are other avenues for Olympic qualifying).