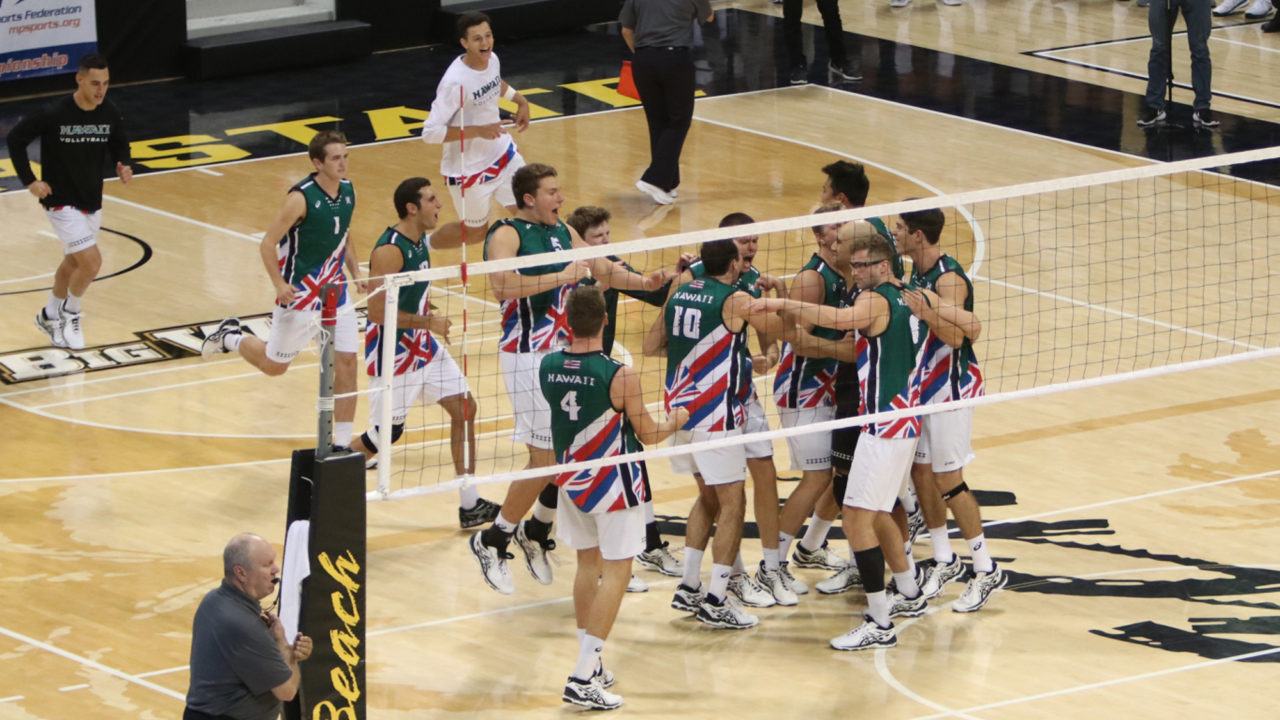 While the rankings might not indicate as such, #4 Hawaii’s sweep of #3 BYU on Thursday evening in Long Beach was a significant upset. The victory keeps Hawaii’s hopes alive for a first-ever MPSF title, and avenges a pair of 0-3 sweeps by BYU in mid-March: two of Hawaii’s 4 losses on the season.

Presuming Ohio State wins the MIVA championship game on Saturday, the win solidifies Hawaii’s spot as an at-large team in the NCAA tournament. If Ohio State were to lose to Grand Canyon on Saturday, that would give the selection committee a challenging task to select two among Hawaii, BYU (ranked #1 in the RPI), and Ohio St. (the defending national champions).

Hawaii hit a whopping .429, which is their second-highest percentage of the season against an MPSF opponent.

For the senior Fey, that matches his season-high for kills and is his second most efficient outing of the year – far exceeding his overall .250 hitting percentage in 2017. Fey also added in 7 digs.

BYU also played well offensively, hitting .388. They were led by Jake Langlois, who had 15 kills (.462 hitting percentage) and Ben Patch, who had 14 (.385 hitting percentage). The All-American Patch missed over half of the Cougars’ season this year, including the tournament-opener, which has allowed Langlois to develop into a star.

While both players performed well on Thursday, BYU’s 4 losses this year have all come with Patch on the court – and playing well in 3 of the 4 (including a 25 kill effort in January that resulted in a 3-1 loss to Loyola).

Patch’s return meant a spot on the bench for 6’10” junior opposite Tim Dobbert on Thursday. After 13 kills, 2 aces, and 4 blocks in the quarterfinals, Dobbert played in 2 sets but didn’t record a single stat of any kind on Thursday.

“Congrats to Hawai’i for advancing,” BYU coach Shawn Olmstead said before giving his breakdown of why Hawaii won the game. “They put a bunch of pressure on us from the service line. We just couldn’t get our team in system. Our hitters had to battle through that. They made good touches defensively and were in good spots. I think it started from the pressure of them serving. Hawai’i deserves to advance and get another chance to play.”

Hawaii recorded 15 block assists in the game, led by 5 from senior middle blocker Hendrik Mol. Mol also had an errorless 8 kills on 13 swings for the Warriors, including 4 in the first set to help counteract 4-each from Langlois and Patch in a clean first set that saw only 5 attack errors from the two teams combined.

Neither team hit less than .312 in any one set throughout the game.

Hawaii will play Long Beach State on Saturday at 7:00 PM Pacific Time after LBSU beat UC Irinve 3-0 in the other semi-final.

Here is how the match ended pic.twitter.com/ycFq7mBFgM

Patrick Gasman with two straight big blocks to give #HawaiiMVB the 2nd set and a 2-0 lead. Love the reactions from Fey and van Tilburg pic.twitter.com/cZln3ZuIzN

The Rainbow Warriors (26-4) avenged two earlier losses to the Cougars to advance to their fourth MPSF Tournament title match, and first since 2002. UH will meet either top-seed Long Beach State or No. 4 seed UC Irvine on Saturday at 7:00 p.m. PT.

UH was led by senior outside hitter Kupono Fey, who matched his season-high of 16 kills, hitting .464, along with seven digs and four blocks. The Honolulu native came up big in the final set, tallying three late kills and his lone ace as the Warriors closed out on the match on a 10-4 run.

Opposite Stijn van Tilburg added 12 kills, four digs, and three blocks while middle Hendril Mol (8) and Patrick Gasman (5) combined for 13 kills without an error, hitting .684. Mol led the team with five blocks as the Warriors tallied 7.5 for the match. Setter Jennings Franciskovic dished out 38 assists and served two aces while directing the offense to a .429 mark.

Jake Langlois had a team-high 15 kills for the Cougars (24-4), who had swept the Warriors in two matches in Provo, Utah last month. Ben Patch added 14 kills while Brenden Sander chipped in 11 kills and three aces.

Set 1 featured 17 ties and six lead changes with no team holding a lead larger than one point until the final stretch. With the score tied at 21, the Warriors strung together three straight, which included consecutive Cougar errors. After a BYU point, van Tilburg put away set point giving UH the first set and snapping a six-set losing streak to the Cougars.

Set 2 was similar to the first as the teams battled back and forth for the first half of the frame. The Cougars took an 18-16 lead after a Sander ace but the Warriors responded with a 6-2 run for a 22-20 lead. BYU answered with three straight points but UH matched that run with three of their own to end it, capped by back-to-back blocks by Gasman.

UH took an 11-8 lead in Set 3 with a three-point spurt that included a Fey-Mol double block on Langlois. The Cougars rallied back and took an 18-15 lead with a 6-1 run spurred by three Warrior errors. Back-to-back kills by Fey tied it at 19 and another kill by Fey put UH on top for good. A Franciskovic ace put the Warriors on top by two and Fey’s ace brought the Warriors to match point at 24-21. After a Langlois kill, van Tilburg ended it with his 12th kill.

Saturday’s championship match can be seen online at FloVolleyball.tv and over the radio on ESPN 1420AM with Tiff Wells calling the action.

“Congrats to Hawai’i for advancing,” BYU head coach Shawn Olmstead said. “They put a bunch of pressure on us from the service line. We just couldn’t get our team in system. Our hitters had to battle through that. They made good touches defensively and were in good spots. I think it started from the pressure of them serving. Hawai’i deserves to advance and get another chance to play.”

Jake Langlois led the Cougars with 15 kills on a .462 clip. Ben Patch and Brenden Sander had 14 and 11 kills, respectively. Leo Durkin set the team with 40 assists while Erik Sikes chipped in seven digs in the setback.
BYU (24-4) and Hawai’i (26-4) stayed close to start the first set as a Sander ace gave the Cougars a 9-8 edge. BYU remained ahead 17-15 after a Price Jarman and Durkin block. The Rainbow Warriors quickly countered with a 4-1 run to go up 20-19, forcing a Cougar timeout. Back-to-back BYU attack errors gave Hawai’i a 24-21 lead before a kill from the Rainbow Warriors’ Stijn van Tilburg ended the set 25-22 with a kill.

Hawai’i started the second set with a pair of blocks, but that was quickly followed with two kills from Patch to give the Cougars a 4-3 lead. A Sander kill from the back row evened the score at 13-all, and another Sander ace gave BYU an 18-16 advantage. The Rainbow Warriors followed with a 6-2 rally to take a 22-20 lead, but the Cougars scored the next three points, capped off by a Sander tool off the block, to go up 23-22. Hawai’i came back, however, winning the next three points to take the close set 25-23.

The Rainbow Warriors jumped out to a 3-0 advantage to start the third set after a pair of kills and an ace. BYU came back to take a 7-6 lead on a Langlois kill, but Hawai’i scored the next three to retake the 9-7 edge. A pair of Sander kills brought the Cougars within one, down 13-12, and a Langlois solo block put BYU ahead 15-14. The Cougars led by as many as three at 18-15, but the Rainbow Warriors came back to even the score at 19 apiece. Hawai’i stayed in control through the rest of the set, winning the set and match 25-22 on a kill.
The Cougars next hope for an at-large bid to the NCAA tournament. The selection show begins Sunday, April 23, at 11 a.m. MDT, streamed live on NCAA.com.