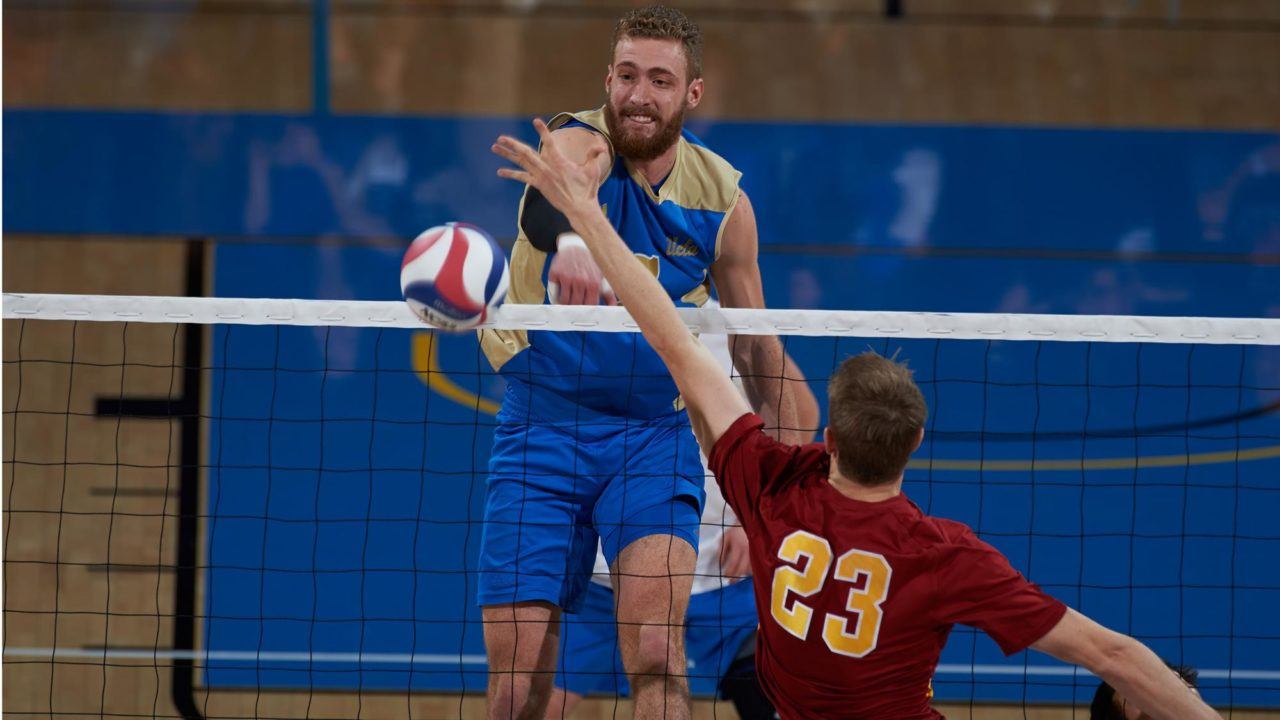 UCLA's Mitch Stahl had just 1 kill, but made up for it with 5 aces in Saturday's sweep of UCSB. Archive Photo via UCLA Athletics

A big day at the service line led the 2nd-ranked UCLA men to a 3-0 sweep of the UCSB Gauchos on Friday at Pauley Pavilion. While the final score was lopsided in favor of the home team, the sets were not necessarily so, with UCSB either tying or taking leads late in each of the first two frames.

UCLA hit .420 as a team in the game, but the biggest show was from Mitch Stahl, who had a season-high 5 aces on the day, out of 6 total for UCLA. That serving performance atoned for a season-low 1 kill for him.

After two back-and-forth sets, both won by the Bruins, they opened up big in the 3rd with a 7-1 run to kick things off. UCSB fought back to pull within 1, but a 6-1 run from UCLA put them into the lead for good. Appropriately, a Stahl ace scored the 75th and final point for UCLA to seal victory.

UCSB had one player in double digit kills – Jacob Delson with 11 on 24 swings. He also added 2 blocks, 2 aces, and 5 digs for a well-rounded 14-point scoring line.

Freshman middle blocker Daenan Gyimah had 12 kills and hit  .647 for UCLA, marking the 5th time he’s hit for double digits and over a .400 average this season out of the middle.

No. 2-ranked UCLA swept No. 11 UC Santa Barbara in three sets on Friday night in the Thunderdome to register its sixth straight win on the season. Scores of the match were 25-22, 25-22, 25-17. The Bruins rode the strong serve of senior Mitch Stahl, who had a season-high five aces, to victory. UCLA, now 8-1 and 6-0 in MPSF action, will host Princeton (2-2) of the EIVA in a non-league match on Sunday night at 8 p.m. in Pauley Pavilion.

In set one, UCSB broke a 12-all tie with three straight points to go up 12-16. The Bruins rallied and tied the score at 19s after a kill by junior JT Hatch. Back-to-back aces from Stahl pushed UCLA into a 21-19 lead. Another Hatch smash made it 23-20 and the fifth kill of the set by freshman Daenan Gyimah made it 24-21. Set point came on a service error for a 25-22 decision.

Junior Jake Arnitz’ three straight points lifted UCLA into a 10-7 in set two. UCSB came back to even the score at 17 and again at 19-all. The Bruins grabbed a 21-19 lead on a service error and a Hatch kill. Kills by Arnitz and senior Hagen Smith gave UCLA the set at 25-22.

UCLA opened up a 7-1 lead to begin set three behind the strong service game of Stahl. UCSB closed to within one, at 9-8, but the Bruins spurted back out to a 14-10 edge after another ace by Stahl. A kill by Christian Hessenauer made it 21-15 and the set ended on an ace by Stahl, who now has 16 aces in the last five matches.

Gyimah recorded a team-best 12 kills and hit .647 for the match. Arnitz and Hatch (.529) finished in double digits with 11 and 10 kills, respectively. Smith had four kills, 18 set assists, seven digs and a block. Jackson Bantle had 8 digs. Micah Ma’a totaled 21 set assists and six digs. UCLA outhit the Gauchos .420 to .274. UCSB, with 5.0 total blocks, became the first opponent this season to out block the Bruins, who recorded 4.0.

SANTA BARBARA, Calif. – No. 11 UC Santa Barbara gave an improved effort in its second matchup against No. 2 UCLA in the last three days, but that proved to be not enough as the Bruins and their high-octane offense pulled out a 25-22, 25-22, 25-17 sweep at the Thunderdome on Friday night.

In front of a season-high crowd of over 600, the Gauchos (6-3, 3-3 MPSF) put on a solid offensive display in sets one and two, hitting over .350 as a team in each frame. Unfortunately, UCLA (8-1, 6-0) was just a bit better at each turn, hitting over .400 in each of the first two games before putting the match on ice in the third by holding the Gauchos to .077 hitting.

Middle blocker Mitch Stahl (five aces) led a strong serve effort for UCLA that gave the Gauchos problems, especially in the third set. UCSB was only able to side out on 47% of its serve receive opportunities, while the Bruins hovered around a solid 70% for the evening.

Still, there were signs of improvement after Wednesday’s sweep at Pauley Pavillion, with the team hitting almost 100 points higher for the match and competing in two of the three sets.

“UCLA is a very good team and they served really well tonight,” said UCSB head coach Rick McLaughlin. “I thought we played a lot better tonight than we did on Wednesday, and I’m happy that we were able to improve in a lot of areas. If we keep focusing on getting better, we’ll end up in the playoffs which is where we want to be.”

UCLA’s offense was led by middle blocker Daenan Gyimah, who had a match-high 12 kills on just 17 swings. The Bruins’ outsides weren’t far behind however, with Jake Arnitz grabbing 11 kills and JT Hatch finishing with 10. Setters Micah Ma’a and Hagen Smith led the team to a .420 hitting percentage for the night.

The Gauchos had their best chance at winning a set in the first. Behind a strong service run from Delson, the Gauchos turned a 12-all tie into a 16-12 lead. However, UCLA answered back with a run of their own and tied the match at 19-19 with a strong slam-down spike from the left side by Hatch. Stahl put the Bruins ahead on the very next point with his first ace of the night, then added another after a UCSB timeout to create some cushion. The Gauchos couldn’t close the gap from that point, with the stanza coming to a close when Delson served into the net on set point.

Though the Bruins led by as much as four midway through the second set, UCSB clawed back and made it close down the stretch thanks to strong play from Drake (three kills on three swings) and DeWeese (14 assists, all six UCSB starters had multiple kills). Unfortunately for the Gauchos, two straight points for UCLA off a 19-19 tie turned out to be the difference, as the Bruins were able to side out each time UCSB got the serve to close out the set.

UCLA dominated in game three, winning the first four points en route to a 7-1 advantage. The Gauchos were able to bring it within three later in the set, but a 5-0 service run from Stahl made it 17-10. He then ended the match his next time up to serve, ripping a jump serve off the tape and down on the UCSB side of the court.

Coming off a stretch that saw them play seven of eight at home in January, the Gauchos play their next four matches on the road starting with a pair of contests next week at Hawaii. Both matches, the first on Friday night with the second to follow the next evening, are slated for 9:00 p.m. PT starts.