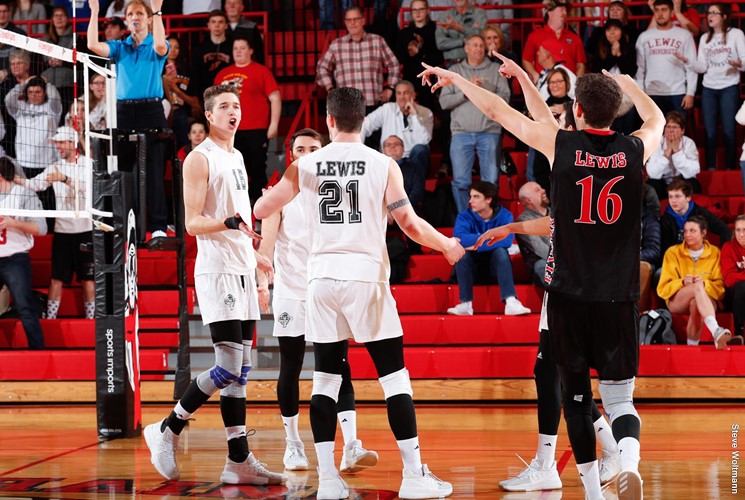 ROMEOVILLE, Illinois – No. 9 Lewis dominated the net in a sweep of visiting MIVA foe Ball State, outhitting the Cardinals .381 to .038 with help from a 14-4 edge in blocks.

After hitting .579, in the opening set, Lewis followed with a .391 effort and a .190 showing in the final stanza. Ball State hit in the negative percentages in Sets 1 and 3 with a .261 effort in between.

Lewis jumped ahead 7-2 in Set 1 with a kill and a block from Bugee and a Coenen ace. The Flyers upped the margin to 10 at 16-6 with a 7-0 run, including a kill and a solo stuff by Murray and a Mitchem ace, forcing Ball State to use both timeouts along the way. Three more Murray putaways made it an 12-point game at 21-9. The teams split the final eight points to close out the 25-13 win. Coenen notched two kills in the final stretch, including the last point.

Murray notched three kills, three blocks and an ace to pace the Flyers in Set 2. The teams played to a 6-all tie, before the Flyers pulled away with seven of the next 10 points. Murray posted two blocks and Lewis got three points off of BSU service errors, which made it 13-9. Ball State was within two twice, last at 17-15 on a Reardon ace. Lewis posted a 6-2 run with help from two kills and a block by Murray, to surge ahead 23-17. The Cardinals scored three straight including a block by Reardon and Walsh to force a Flyer timeout. Two Bugee kills clinched the win, although a Reardon putaway thwarted the first set-point try at 24-20.

The Cardinals regrouped at intermission and snagged a 6-2 lead in Set 3. Weiler posted a kill and an ace in the stretch. Lewis turned the tables with a 9-2 run, including three Mitchem blocks and two Bugee aces, which lifted the Flyers to an 11-8 advantage. Ball State called timeout and worked its way into a tie at 12 and 13, but couldn’t overcome a 7-3 Flyer surge, including four errors. Down 20-16, BSU called timeout and scored back to back points, but Lewis wrapped up the sweep with five of the final seven. Kills by Murray and Perinar dealt the final blows.

The 10th ranked Lewis Flyer men’s volleyball team avenged an earlier defeat to 11th ranked Ball State with a sweep of the Cardinals on Saturday evening at Neil Carey Arena. The Flyers (16-8, 7-3 MIVA) had a hitting percentage of .381 and 14 total blocks in the contest.

The Lewis defense held the Cardinals (13-11, 6-4 MIVA) to .038 hitting percentage in the contest. Matt Szews led the way with six kills while Matt Walsh and Parker Swartz added four kills each. Jake Romano handed out 21 assists while Szews and Blake Reardon had digs each.

The Flyers opened the match on a 7-2 but Ball State crept back into it by scoring four of the next six points to cut the deficit to 9-6 on a kill from Szews. Lewis responded with a 9-1 run and forced the Cardinals to use both of their timeouts during the run. The Flyers hit .579 in the opening set and cruised to the 25-13 set win.

The second stanza was tight early before Lewis began to gain some distance with a 5-2 run midway through the frame. Ball State cut the lead to two twice but the Flyers answered with a 5-1 run to push the lead to six and held off a late Cardinal charge to win the second set 25-21. Lewis hit .391 in the middle stanza.

The Flyers fell behind by four to begin the third set but used a 9-2 run to take an 11-8 lead on an error from Parker Swartz and forced Ball State to take a timeout. The Cardinals evened the frame at 13 after a kill from David Siebum but Lewis countered with a 7-3 run to take a 20-16 lead. Coenen had three kills in that run. Ball State cut the lead to 20-18 after a Flyer error but Lewis ended the set scoring five of the final seven points of the match to win 25-20 and complete the sweep.

The Flyers begin a four-match road trip to close out the regular season next Thursday traveling to Lebanon, Ill., to take on McKendree at 7 p.m.

Ball State was tallied 25 kills and only hit for .038. The Flyers  however were able to knock down 34 kills for a .381 hitting percentage. The Cardinals were also able to add 23 assists, 17 digs, five service aces and 4.0 total team blocks. Matt Szews led the way for Ball State with six kills, three digs and two blocks. Parker Swartz, Matt Walsh and Blake Reardon each added four kills apiece. Mitch Weiler and David Siebum knocked down two kills each. Weiler also had two service aces.

Ball State had a negative hitting percentage in set one with only six total kills. Walsh had a team-high two kills in the set. The Cardinals had six assists and four digs. Lewis had 13 kills for a .579 hitting percentage and won the set, 25-13.

In the second set, the Cardinals had a better showing offensively. They had 11 kills for a .261 hitting percentage. Szews and Reardon each had three kills. Swartz and Romano added two kills apiece in set number two. Swartz and Reardon were the two Cardinals with service aces in the set. After five tied scores and one lead change, Lewis took the set with a final score of 25-21.

Ball State was up by as much as four in the third set before falling victim to the Flyers. There were five tied scores and one lead change before Lewis took the set, 25-20. The Cardinals had eight kills in the set, but hit in the negatives once again. Ball State also had six digs, two service aces and two blocks.