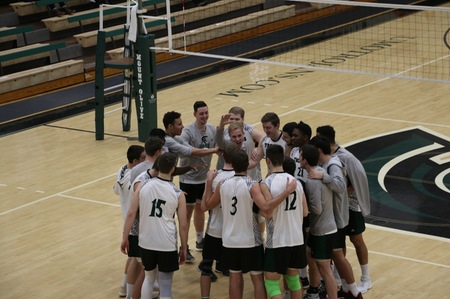 King and Mount Olive registered sweeps to stay among the top three in the Conference Carolinas standings, while No. 16... Current Photo via Mount Olive Athletics

King and Mount Olive registered sweeps to stay among the top three in the Conference Carolinas standings, while No. 16 George Mason picked up an EIVA sweep on Saturday afternoon. Harvard notched a non-conference victory over Alderson Broaddus, while No. 15 Concordia Irvine delved deep in its lineup in a four-set win over Benedictine.

Key Stats: In the first of two Saturday matches in Surprise, Arizona, the Eagles outhit Benedictine .214 to .065. Concordia Irvine also boasted a 47-36 lead in kills and 13-10 edge in blocks. The Eagles bookended the match with a .429 hitting effort and .355 clip, while hitting under .100 in between. For its part, Benedictine hit at a team-high .219 clip in the final stanza.

It Was Over When: Benedictine led 9-4 in Set 4 with help from two aces and a kill by Adcock. Concordia Irvine was within two five times, last at 14-12, but could not break through. A block and a kill by Jones made it 17-12 Redhawks. The Eagles rallied from there, tying it up at 18 en route to a 21-19 advantage of their own. Four Predney putaways guided the Concordia rally. A Henige kill slowed the Eagles momentarily, but Concordia capped the win on a 4-1 run. Carlson downed to kills to make it 24-22 and a hitting error accounted for the final point.

Stat Leaders: Senior outside Jeff Sprayberry led all hitters with 11 kills for King, while hitting at a .455 clip and serving up two aces. Freshman outside Sean Kohlhase and senior right side Kiel Bell added five putaways each, while junior middle Jon Wheaton added four. Kohlhase and Wheaton also served up two aces apiece, while Wheaton and senior middle Adrian Besson put up a team-high four blocks.

It Was Over When: King raced out to a 20-4 lead in Set 3, scoring 10 points on Emmanuel miscues and four on blocks, three by Kohlase, and kills by four different players. The Lions rallied with six of the next nine points with help from four Tornado errors and an ace by Marvin Castellon. With a 23-10 lead, King finished off the win with a Sean Luhmann kill and a solo stuff by Wheaton.

It Was Over When: North Greenville took an early 6-4 lead in Set 3, but Mount Olive responded with eight of the next 10 points. Poole registered two kills and an ace, while the Crusaders chipped in two points on errors, as the Trojans went up 12-8. NGU pulled within one three times, last at 15-14 as Deon Vidal added two putaways and McManaway turned in a kill and an ace. Mount Olive wrapped up the match with 10 of the final 13 points. Three miscues, two Luke Visgitis putaways and an ace by Erkek highlighted the final run. Hollevoet issued the final kill at 25-17.

Key Stats: A 44-26 lead in kills and a 7-0 advantage in aces led the Patriots in the sweep. George Mason hit .643 in the opening set with just one error, but struggled to reach .150 the rest of the way, despite registering the victories. The Patriots boasted an 8-7 lead in blocks and held the Golden Eagles to a .156 hitting effort. The victory moves GMU to 7-0 in EIVA play, its best conference start since 2003.

Stat Leaders: Junior outside Kyle Barnes and sophomore opposite Hayden Wagner turned in 12 kills apiece to lead George Mason to victory. Wagner was one of three players to served up two aces in the match alongside redshirt senior outside Christian Malias and senior right side Brian Negron. Sophomore middle Bryce Gatling (7) and redshirt freshman middle Jack Reese (6) rounded out the offense. Reese hit at a team-high .365 clip and added three blocks, while Gatling hit .333 and put up a team-leading four stuffs.

It Was Over When: George Mason scored the first three points of Set 3, including an ace by Malias and held on to lead 7-4. Charleston scored five of the next six, including back to back blocks by Roberts, which gave the Eagles a 9-8 advantage. Later, trailing 11-10, the Patriots countered with a 7-2 run, thanks to two kills and an ace by Wagner, and two blocks and a kill by Gatlin. Down as many as four, last at 20-16, the Eagles chipped away, cutting the margin to one at 21-20 and 22-21. Four GMU miscues and kills by four different players highlighted the stretch. The Patriots scored three straight with a Wagner kill, a stuff by Gatling and an ace by Barnes to seal the 25-21 win and the sweep.

Senior outside Francisco Cabrera was tops among the Battlers with seven kills, but hit just .040 in the match. Senior middle Myles Miller followed with six kills on a team-high .417 hitting effort to go with a team-leading four blocks and an ace. Freshman outside Alex Sands and freshman middle Chase Christiansen added four putdowns apiece.

It Was Over When: After a tie at 6-all, Alderson Broaddus broke away with a 6-1 run. Two blocks and a kill by Miller coupled with three Harvard miscues put the Battlers on top 12-7. The Crimson was back within one at 14-13 thanks to three AB errors and two Gordon putaways. Four Harvard miscues pushed the Battler lead to four at 19-15. The Crimson rallied to tie the score at 22 and 23 and fought off a set-point effort at 24-23, before stealing away the win. Four players contributed kills en route to the knot-up at 22. A Kostich putaway thwarted the Alderson Broaddus set point try, while a block and another kill by the senior wrapped up the day.