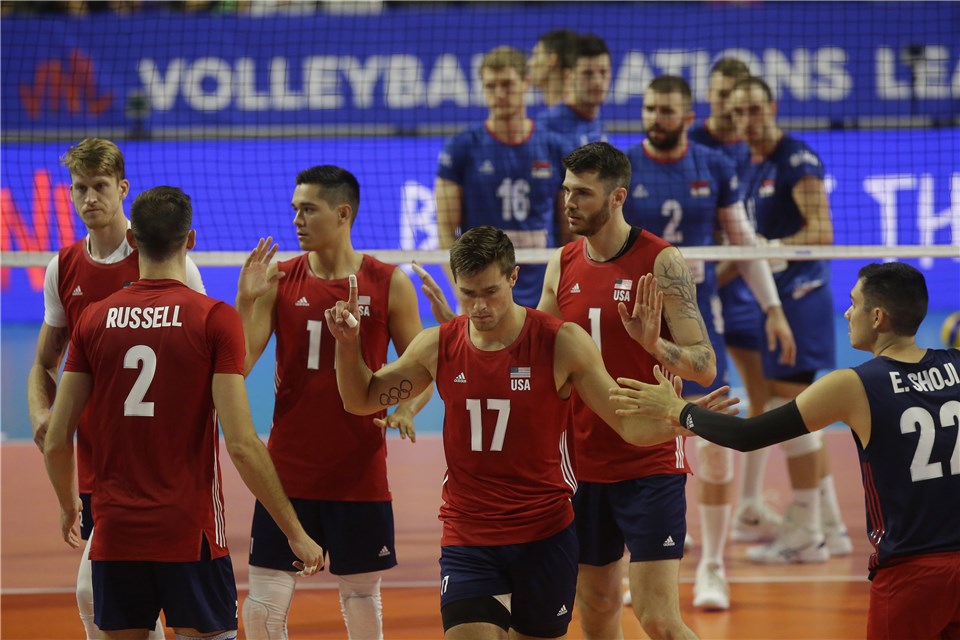 Thomas Jaeschke (#17) had 9 points before leaving early in the 2nd set. Current Photo via FIVB

Playing in their first home game of the 2018 FIVB Men’s Volleyball Nations League at home on Friday, Team USA picked up a crucial 3-0 win over Serbia to remain in the ‘safe’ zone for the next stage of the tournament: the Final 6.

But the win didn’t come without a cost: another offensive weapon lost, as Thomas Jaeschke went out of the match early in the 3rd set with what appeared to be a left knee injury and had to be carried off the court. He scored 9 points on 7/12 hitting with 2 blocks before the injury.

He was replaced by Long Beach State rising senior TJ DeFalco, who had 5 points in less-than-a-set of playing time on 3-for-3 hitting and 2 blocks.

“We’re heartbroken to see Thomas (Jaeschke) get hurt in the middle of the match like that,” head coach John Speraw said. “Hopefully he’s OK. But you need to have guys come up when guys go down and T.J. (DeFalco) certainly did. He’s such a good blocker and had such a good game at the net.”

Jaeschke is expected to be undergo testing on Saturday to find out the extent of the injury.

This is the 3rd offensive player that the American have lost, after outside hitter Taylor Sander left the team to be with his wife ahead of the birth of their first child, and losing opposite Ben Patch for week 4 with an undisclosed injury.

After running through lots of lineups in the first 3 weeks of play, the U.S. has dramatically  tightened-up their rotation in week 4. Before Jaeschke’s injury, no reserves played even a single point in the match.

Jaeschke joined the U.S. Men’s National Team in 2015 and was a member of the bronze medal squad at the Rio Olympics. He played his club ball with Asseco Resovia Rzeszow from 2015-17 before signing with Verona in 2017.