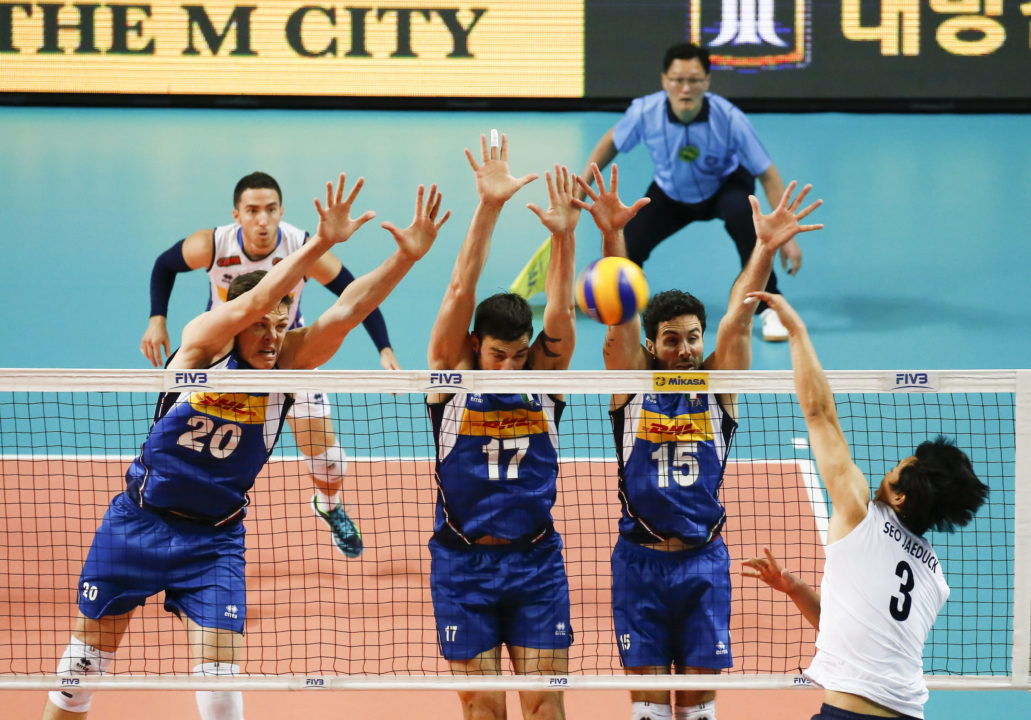 Korea dominated the offensive side of the ball and Italy excelled at the net before the Italians eventually hung on for the five-set victory. In a match featuring three deuce sets, all in extra points, a 12-kill advantage was the difference in a four-set Australian win.  Current Photo via FIVB

Korea dominated the offensive side of the ball and Italy excelled at the net as the teams tangled in a five-set marathon before the Italians eventually hung on for the victory.

Italy coach Gianlorenzo Blengini: “It was a difficult match We played well through the first and second set, but our reception was shaken by the strong service of Korea. Korea pushed us well with their serve. We tried to solve the problem through changing the right player with better service-reception so we could win the game.”

Korea coach Kim Hochul: “Besides feeling regretful, I think we should have pushed Italy from the first set. After starting with our best squad, I felt I might lose in straight sets, so I changed the players who were not able to show up until today’s match. The atmosphere changed a lot after the substitution.”

Korea captain Moon Sungmin: “All of the players who played in this game had strong will to give their best. From the third set we did our best until the end. Even though losing the fifth set was depressing, I think we have gained more confidence for the next match.”

In a match featuring three deuce sets, all in extra points, and decided by just six total points, a 12-kill advantage was the difference in a four-set Australian win.

Libin Liu notched 21 points on 13 kills, a match-high seven blocks and an ace to lead China. Daoshuai Ji (17) and Chuanhang Tang (15) followed, each adding double-digit putaways with 12 and 11 respectively. Tang also tacked on four stuffs, while Ji served up a team-high four aces. Twelve Chinese players saw court time in the match with eight scoring at least one point and six putting up a least one block. VNL top scorer Chuan Jiang did not participate in the match.

After dropping the opening set in extra points, the teams battled for 47 minutes in a marathon 41-39 Set 2.

Australia captain Paul Carroll: “Today was a harsh battle. The first three sets might have gone either way. Not often can we say that not a single point or play can change the match. China had the second set. They made an amazing spike and our libero made an amazing defence. Transition of this point brought us to victory. If our libero didn’t save this point, we might have lost today’s match. In the third set they came back with a good blocking plan. They were able to play with their strong block. We are happy that we can come out to win in such a harsh battle.”

China coach Raul Lozano: “Congratulations to Australia. They performed better than us today. I think we played equally in the first three sets. We had opportunities to win the match but could not seize these moments. The big difference was that they were more clever and smarter than us in critical moments.”

China captain Ji Daoshuai: “Congratulations to Australia. It’s such a pity that in some moments we were not able to seize the opportunity especially when the score was tied. I think we didn’t prepare enough to get a victory. This is how the game goes, it can go either way.”