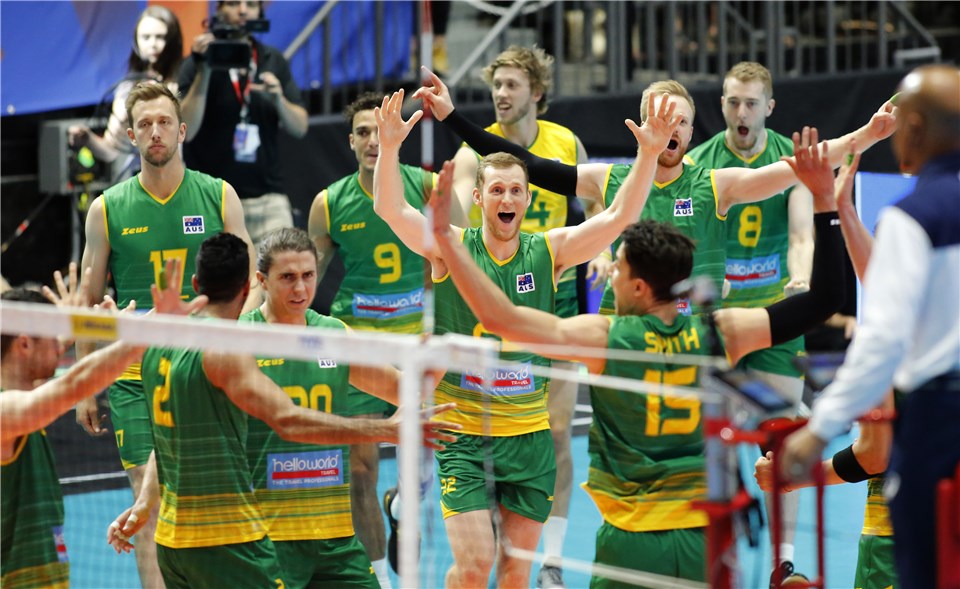 Australia is the only team of the three coming into the week on a victory, having found its stride, going 3-0 in South Korea, while the rest of the Pool 17 teams are looking to snap three-match losing streaks. Current Photo via FIVB

With two of the six contenders in the Final Six race, Pool 17 could have a major effect on final standings. Brazil sits in fourth place at 8-4 (24 points), while Poland is right behind at 8-4 (23 points). Both need a couple of wins to secure their spots with Italy and Canada still within striking distance.

Australia is the only team of the three coming into the week on a victory, having found its stride, going 3-0 in South Korea, downing the hosts as well as China and Italy.

The rest of the Pool 17 teams are looking to snap three-match losing streaks. Brazil fell to Canada, France and Bulgaria in its Week 4 stay in Bulgaria. Poland looks to shake off a terrible showing of three sweeps in the USA at the hands of Iran, the USA and Serbia. Argentina dropped all three of its matches in Germany on Week 4, against Russia, Germany and Japan.

With just France having punched its ticket to the VNL Final Six, by virtue of acting as the host nation, the race is still wide open. Nine points are available per team with three matches left. As it stands, it will take at least eight wins to earn a Final Six berth, leaving 12 teams in play, although several would need help to break through due to the points tallies.

Brazil, Poland and Serbia are in the most precarious positions among the current Top 6 with 24, 23 and 20 points respectively. Italy is just one match out at 7-5 with 21 points in its pocket. Canada sits in eighth at 6-6, but boast 18 points. So, not only do Brazil and Poland need victories, they need them to come in three or four sets, to give themselves a little cushion in points.

What role will the momentum of Week 4 play in the fight to the finish on Week 5? As previously mentioned, Australia is on a tear after a 3-0 showing including an upset win over Italy, while the other three members of the field are struggling to find form as the tournament progresses. A couple more slip-ups by Brazil or Poland could see them on the outside looking in at the Final Six by week’s end.