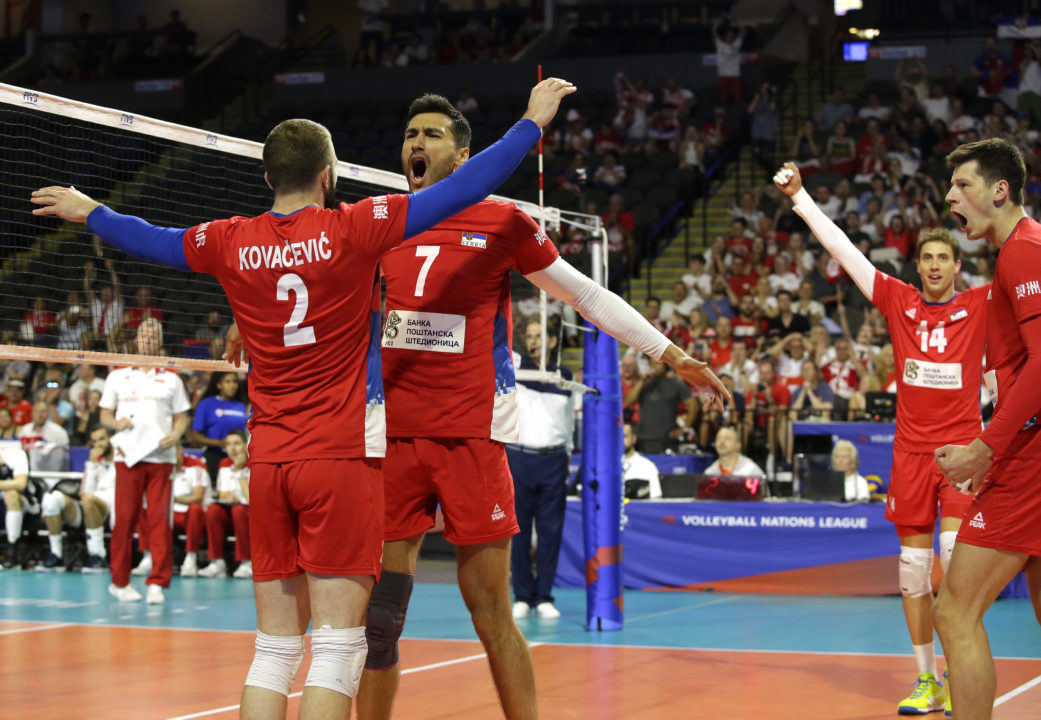 Offense was key for Serbia as the team's 44-37 edge in kills was the difference in a sweep of Poland decided by just six points.  Current Photo via FIVB

Offense was key for Serbia as the team’s 44-37 edge in kills was the difference in a sweep decided by just six points.

In addition to the kills advantage, Serbia also boasted a 6-4 lead in aces. Poland countered with a 10-7 advantage in blocks. Both teams made 18 errors.

Aleksandar Atanasijevic starred for the second straight night, posting a match-high 20 points on 19 kills and an ace. Uros Kovacevic was the lone other player to managed a double-digit tally, turning in 14 points with 10 kills, a team-best three blocks and an ace. Petar Krsmanovic and Srecko Lisinac chimed in with six points apiece, while Milan Katic and Marko Ivovic notched five apiece in limited action. Lisinac served up a team-best three aces, while Katie added two stuffs.

The teams played to a 17-all tie in Set 1 before Serbia pulled away for the 25-23 win with help from a few Polish miscues.

Thirteen errors put Poland behind the eight ball again in Set 2. The Poles led briefly, but fell short in the end as a Kurek net violation capped the 25-23 victory.

The Polish side looked to have righted the ship, taking the lead in Set 3, but again were left wanting as Kovacevic and the Serbians finished the sweep at 25-23.

The victory is the seventh for the Serbians in their last eight matches, save a Friday loss to the United States. Meanwhile, Poland has lost its last three contests.

“After the first two games we changed our energy and we have done much better, “ said Lisinac. “We aren’t looking at the table too much. We will just concentrate on how we are playing.”