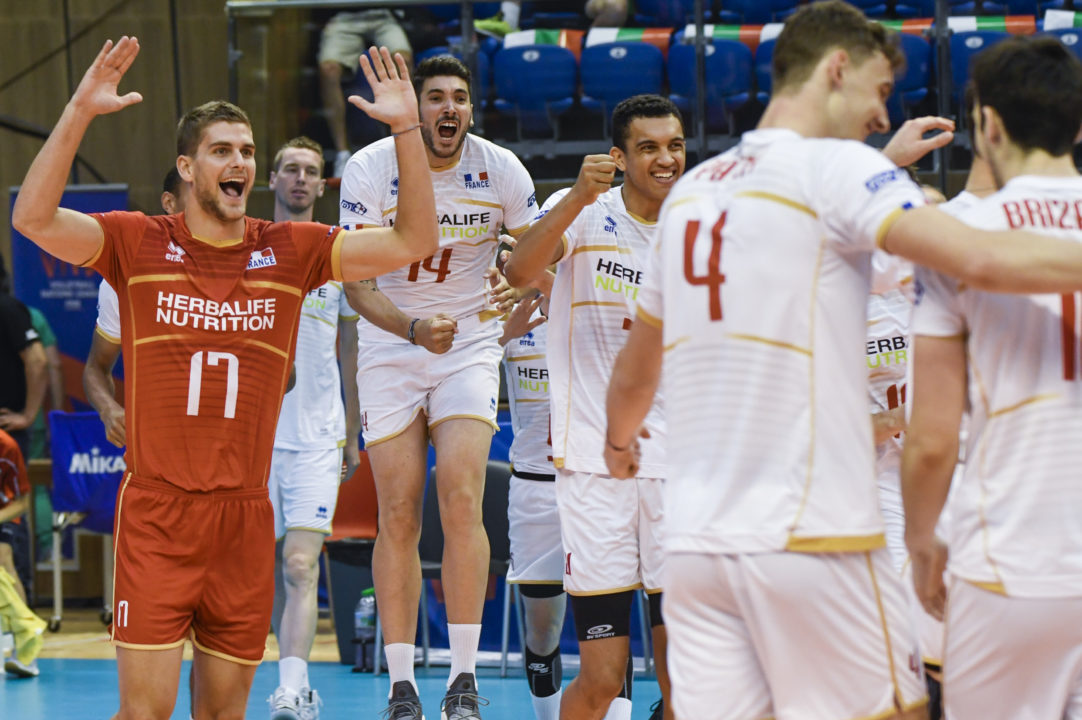 Canada opted not to play many of its starters and came up just short in a five-setter against first place France, which won its sixth straight VNL match. Thirty-three errors proved to be too much to overcome as Brazil fought valiantly before falling to Bulgaria in five sets for the team's third-straight loss in Varna. Current Photo via FIVB

Canada opted not to play many of its starters, including Graham Vigrass and Stephen Maar, and came up just short in a five-setter against first place France, which won its sixth straight VNL match.

Canada committed 38 errors in the match (to France’s 27) to nullify a 10-5 lead in blocks and 5-3 edge in aces. France tallied two more kills (66-64) in the victory, while showing its depth with 11 players seeing court time and nine scoring.

Jean Patry led the way with 20 points, despite not starting until Set 3. Julian Lyneel added 15 over the final four stanzas and six other players added four or more points in the victory. Patry downed a team-best 18 kills and added a block and an ace, while all 15 of Lyneel’s points came via putaway. Jonas Aguenier and Kevin Tillie chipped in nine points each, with Tillie’s all coming on offense and Aguenier notching six kills, a team-best two blocks and an ace. Earvin Ngapeth posted five points in his lone set of play (Set 1), while Stephen Boyer downed seven kills in the opening two sets before exiting.

With Vigrass and Maar on the bench alongside Lucas Van Berkel and Gavin Schmitt, Nicholas Hoag was forced to the front of the pack and posted a match-high 23 points for Canada. Ryley Barnes (18), Justin Duff (12), Bradley Gunter (11) and Artur Szwarc all scored in double digits. Hoag downed a match-best 20 kills, two blocks and an ace. Barnes chipped in 17 kills and an ace. Duff put up four blocks to go with eight putaways. Gunter and Swarc tallied nine kills apiece, while also adding two blocks and two aces respectively.

Canada boasted a three-point lead in the decisive fifth set at 7-4, but could not cash in against the French substitutes. Patry scored two points, including a huge block, to knot the score at 10, and then tooled the Canadian block to give France a match-point try at 14-13. Lyneel and Aguenier came through to capture the 16-14 win and keep the French atop the VNL standings.

Next up for France is a trip to Italy, where the team will play the USA and Russia, who are currently No. 2 and 3 on the VNL ledger.

France coach Laurent Tillie: “I made some changes today in our game style like using different players and trying some new playing variations. Canada performed very well. We had some serving issues and we did not play on a good level in attack. The good thing is that in the end we managed to win. Despite the fact we are hosting the final six, we gave our best to win each game in this group. We achieved our goal winning three times in Varna.”

Canada coach Stephane Antiga: “We are disappointed but the game was nice, we used different players on the court, played very well. I am very proud of them and we were close. But if we look at the number of points we are not the favorites for the Final Six, there are more teams with better chances.”

Canada player Bradley Gunter: “We came out with nothing to lose and took them by surprise a little bit, we showed a lot of fight and battle. Even in the sets we lost, we fought for every point and that was an important part for us. We have to make some points here if we want to make it to the Final Six, we are just going to take it one game at a time and try to do the best we can.”

Thirty-three errors proved to be too much to overcome as Brazil fought valiantly before falling to Bulgaria in five sets for the team’s third-straight loss in Varna.

Brazil boasted a 56-55 edge in kills and 13-9 advantage in blocks, but those were nullified as the team gave away 33 points on errors (to 28 for Bulgaria). The Bulgarians excelled at the service line, outdoing their foes 5-2 in aces.

Wallace DeSouza scored a match-high 22 points for Brazil, all on kills, but it was not enough. Mauricio Silva (12) and Lucas Saatkamp (10) followed. Isac Santos chipped in eight points after entering the match in Set 3. Saatkamp put down eight kills and added two blocks, while Silva and Santos posted six putaways each. Silva also paced the team at the net with five blocks. Otavio Rodrigues Pinto and Douglas Souza chalked up seven points apiece before exiting after Set 3. Pinto managed three blocks and four kills, while Souza tacked on six kills and a block. William Arjona started at setter in place of injured Bruno Mossa Rezende.

Bulgaria led 11-10 in the decisive fifth set when Penchev came to life with three kills to give his team three shots at the match at 14-11. Gotsev clinched the victory with his 12th point of the night, issuing Brazil its third loss in a row, something which hadn’t happened since 2012.