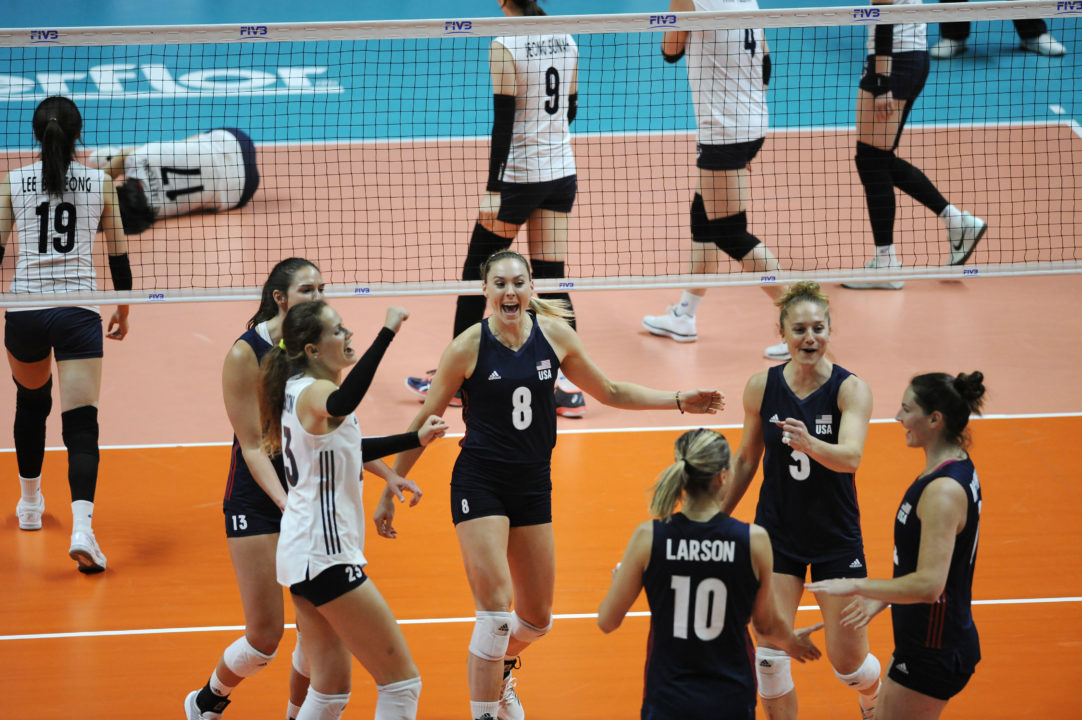 It was an all-around effort with seven players chipping in five or more points for the Americans, who got back on track after Tuesday's loss with a dominating sweep of South Korea. Current Photo via FIVB

It was an all-around effort with seven players chipping in five or more points for the Americans, who got back on track after Tuesday’s loss with a dominating sweep of South Korea.

The United States used a mix of veteran players and newcomers in the win with Lauren Gibbemeyer notching a team-high 11 points. Jordan Larson (10), Kelly Murphy (10), Michelle Bartsch-Hackley (9), Tori Dixon (8), Annie Drews (7) and Sarah Wilhite (5) rounded out the scoring. Bartsch-Hackley downed a team-best eight kills, while the rest of the group posted four or more putaways. Gibbemeyer put up a team-best three blocks, while Larson and Dixon added two stuffs apiece. Murphy served up four of the team’s seven aces and tacked on five kills and a block. Drews scored all of her seven points off the bench, while Wilhite turned in five points in just over a set of action.

Jaeyeong Lee tallied a match-high 13 points for Korea with 12 kills and an ace. Heejin Kim and Jeongah Park followed with nine points apiece. Kim scored on eight kills and a block, while Park’s points all came on putaways. Dayeong Lee served up the team’s lone ace, while three players turned in a block.

Even substitute Micha Hancock got in on the action in Set 1, setting up Bartsch-Hackley for the finish in the 25-13 drubbing.

The Koreans led by as many as three in Set 2, and countered an American rally to go up 20-19 late. Wilhite, the newest member of the roster, clinched the 25-23 win.